If you do not already know, we are engaged! We have been engaged for about 2 months now and we finally arranged a night for us both to have fancy-schmancy dinner to celebrate our engagement.

If you would like to know the story from his side and her side, see below links.

We thought of trying a new place and a new kind of food, hence the restaurant of the night. We heard quite a few of good reviews on this place and thought that this would be the perfect time to try it out. Got reason to wine and dine like a boss. Heh. 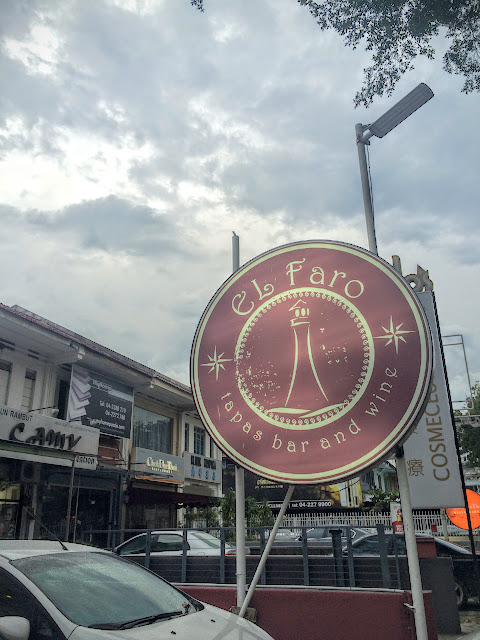 He called in the noon and made a booking ahead so we will not be greeted with, "I'm sorry but we're fully booked today" when we get there. So, prior planning is good.

Spanish kind of night it shall be then :)

We were the first customer to walk in for dinner that night and we were greeted with a warm welcome. We sat down and looked at the menu. It was like new language for us. Our intention that night was to have their signature dishes and wine away the night, laughing at each other being all awkward and all.

One particular thing that we hated dislike was how the Waiter 1 treated us. He gave us the menu and because we are so unfamiliar with Spanish kind of foods, we asked a few questions on certain food items and there he was, standing with his unhappy face, so unwilling to tell us more details on the items.

We even asked him what are some of the signature dishes and he rudely replied. Maybe it's his accent or the way he explained but we couldn't understand what he was saying and when he needed to repeat, he raised both his eyebrows, looked at us as though we're dumb.

Umm. That is plain rude okay. Then, he gave us a list of wine bottles to order and we told him we will just have a glass each since we are going to need to drive to somewhere else later, he raised his eyebrows again and stared at us.

Wah. Since it was a special night, we decided we shall just not let that bother us. Thank God it was another waiter who served us our food and smiled to us everytime he did that. He even helped us take a photo and yeah, it's not the best photo in the world, but A for effort :) 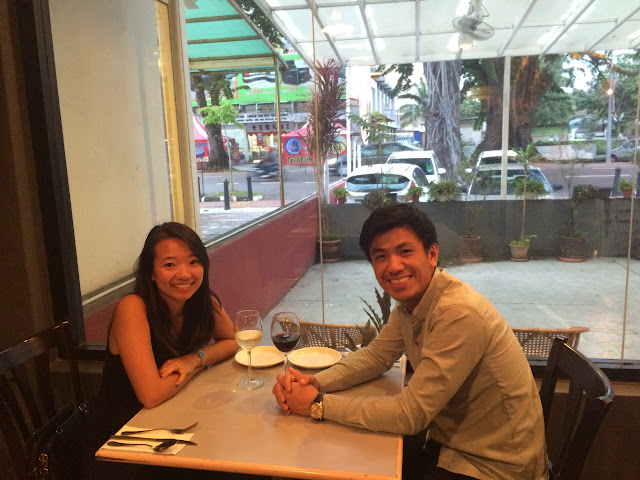 Anyways, shall we now proceed for food thoughts now. Heh.

We were taking quite a while to choose between the pre-set course or choose on our own from their general menu. We decided that since it's such a new thing for us, we will just go ahead with FOR 2 course. 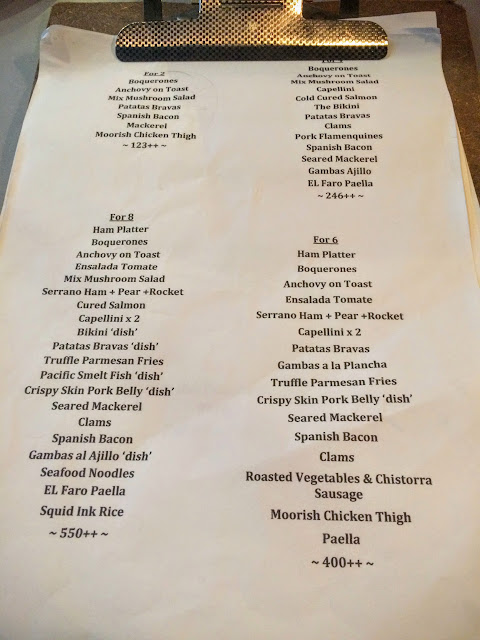 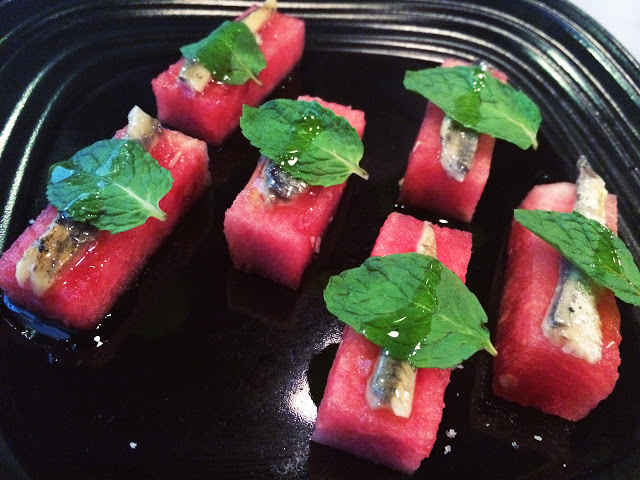 He says: Fishy. However, it works quite well with the mint and watermelon.
She says: I thought that this was an interesting dish. I don't like fruits in general but I was curious to try this one. Mint and watermelon, best combo ever. However, the anchovies were a bit too fishy to my liking. There's this not-fresh-smell if I may say that. 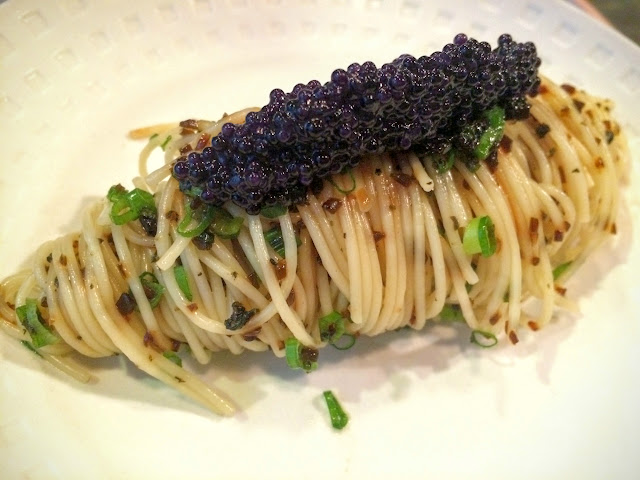 He says: I love this one! Maybe because there is not much cold dish that I've tasted before. Please try!
She says: So funny to eat angel hair/pasta cold, but let me tell you something. This is a must try because it's very different! I thought I was in another world when I had this in my mouth. The taste is so unique I can't help but have more! Like this one. 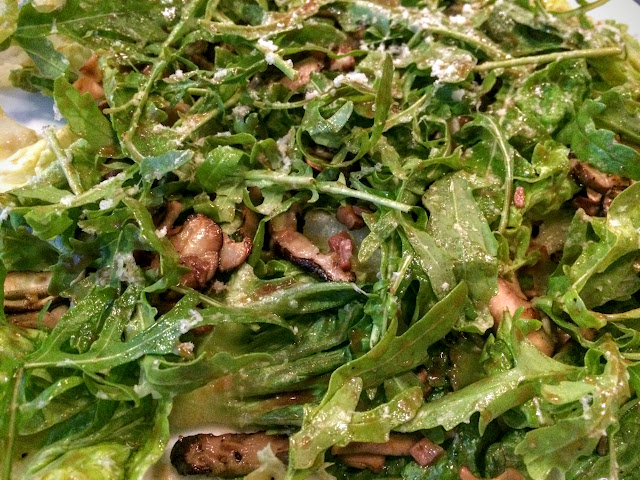 He says:  Not bad.. Love the mushrooms!
She says: Quite a normal salad dish and of course it was better than those bacon-less salad because hello, it's bacon. 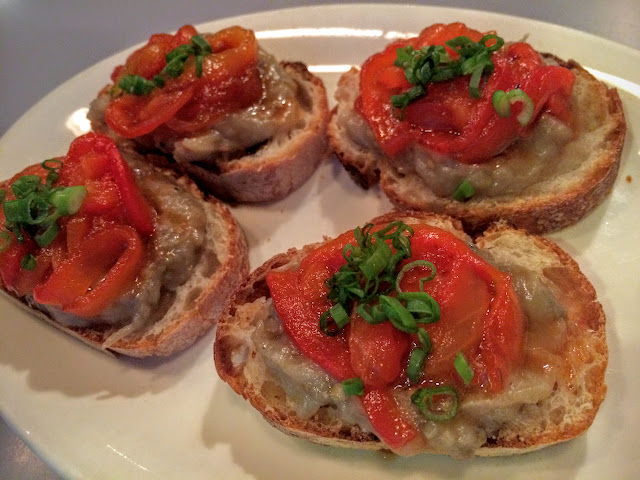 He says: Love it! Toasted to perfection. Must try!
She says: I like that the toast was hard but not too hard. The anchovy and red pepper was really soft and mushy so the texture that the toast gives is very ngam. Not a big fan of this dish. Quite okaylah. Should try tho. 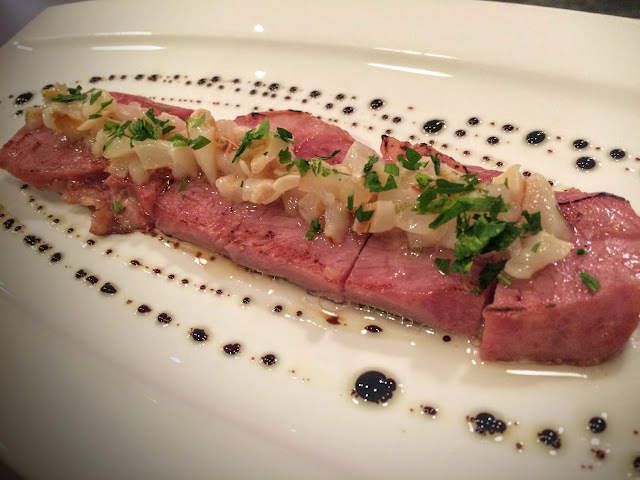 He says: Hahaha. 2nd lychee dish that I know. The other was "lychee pie". Man, this is good, the bacon is scrumptious and the lychee topping surprised me how good it is.
She says: First taste felt so similar to the canned ham that we eat at home. Second taste and you know this is good stuff. Third taste onwards, my mind blew. Who could ever thought that lychee will go so well with this bacon? Well, El Faro's Chef did! And it was brilliant! Especially love the fact that there is no layer of fats in them. Love this one! 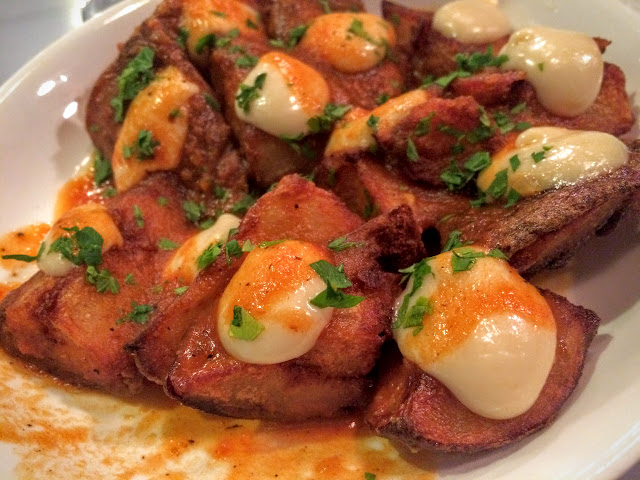 He says: Not bad.. like it. The potatoes were soft inside and crispy outside. The sauce? Just nice.
She says: I thought it would taste like KFC's cheesy wedges. WRONG! Nothing like that at all. The potatoes were not too soft and the brava sauce was not overly sweet. It was a very good dish. Fork licking good for sure. 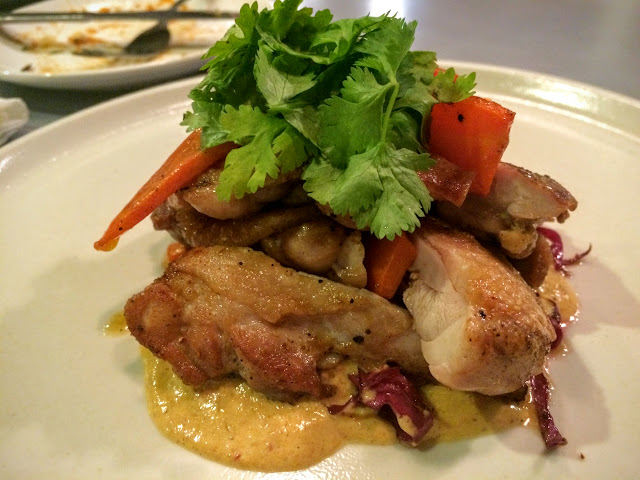 He says:  Just so so for me. Not special to be honest but worth trying.
She says: The chicken thighs were perfect! The Moorish sauce was amazing. It's very similar to Ayam Milanese that we eat at Kapitan, but this one is like an elevated kind. The chicken portion was chun-chun. Amazing dish. 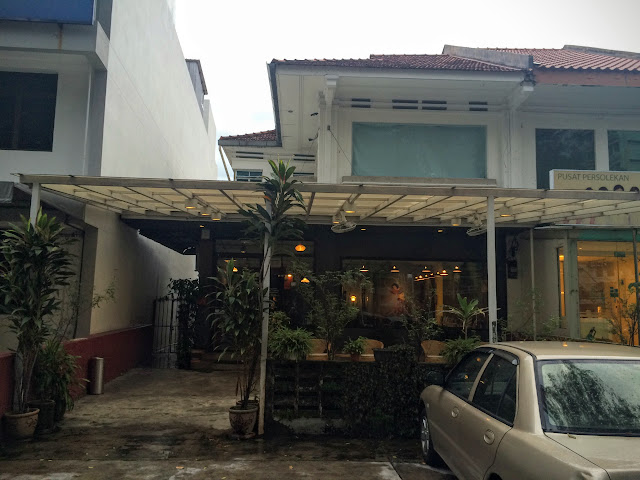 Ratings:
His rating: 7/10
Her rating: 7.5/10
Posted by WhatTwoEatHere at 5:44 pm
Email ThisBlogThis!Share to TwitterShare to FacebookShare to Pinterest