Before we say anything, we would like to say HAPPY NEW YEAR!

HAPPY 2015 to all of you out there! Yes, we do realized it's already the third day into this amazing year. BETTER LATE THAN NEVER, RIGHT? :D

We hope you had a great countdown to 2015 and of course we hope that your 2015 is going to be an exciting one!

On New Year's Eve, we decided to go for 2014's last lunch with her family to celebrate what a great year 2014 has been. God is always good!

We didn't want to have the usual chinese meal. Instead we were looking for those places that serves set lunch. It's always nice to have a family or friend gathering with set lunch/set dinner kind of style.

He found out about this place and we decided to try it out. Set lunch FTW!

Can we just say that this place is TOO similar to a restaurant called Harvest In? IT'S TOO SIMILAR. Harvest In serves ala carte but when you add extra RM, you will get a set lunch.

So, we thought,"Okay, this is their competitor!"

Even more excited to do a review on them. Heh.

Gotta love them photos on the wall. All painted. 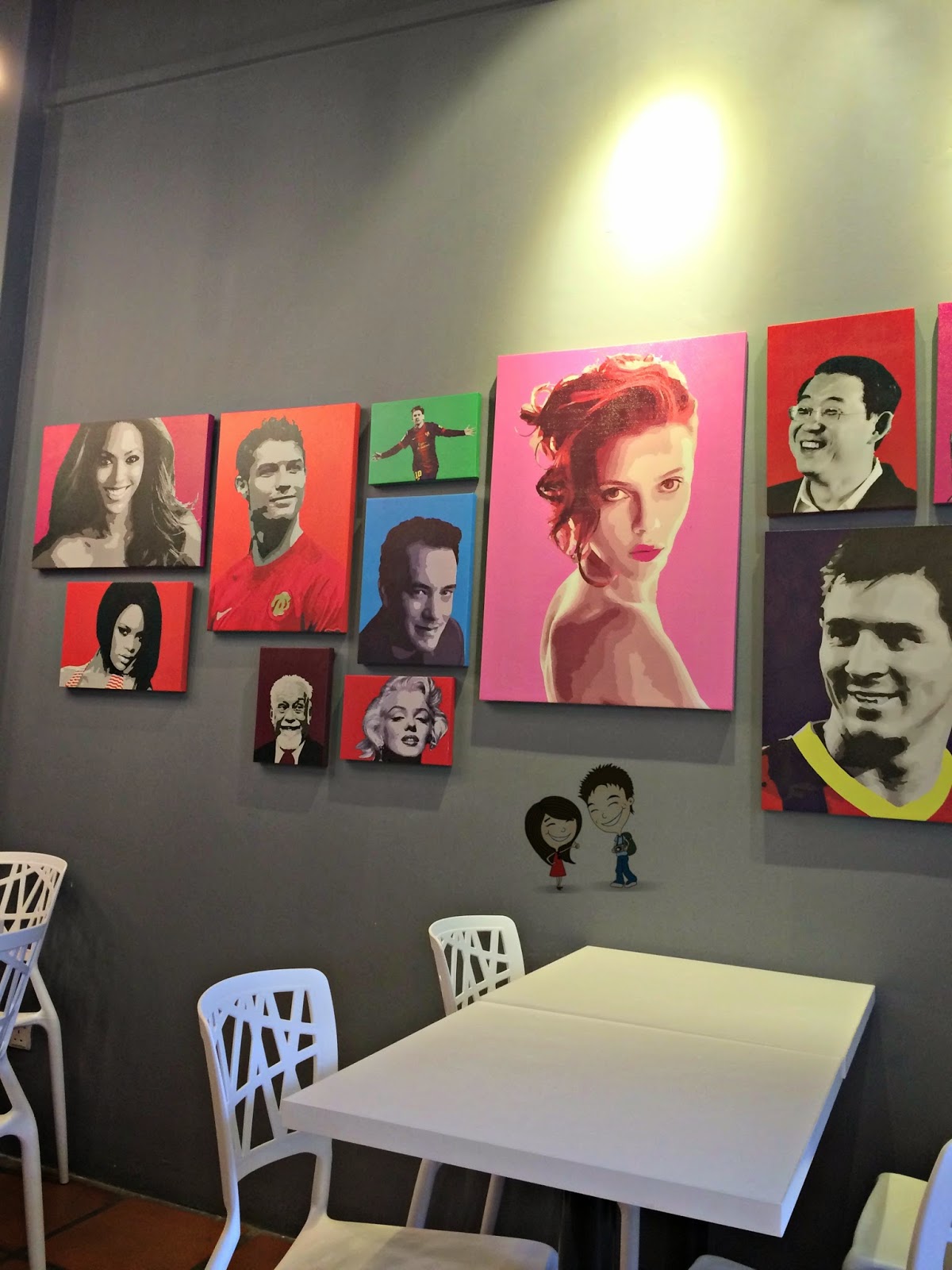 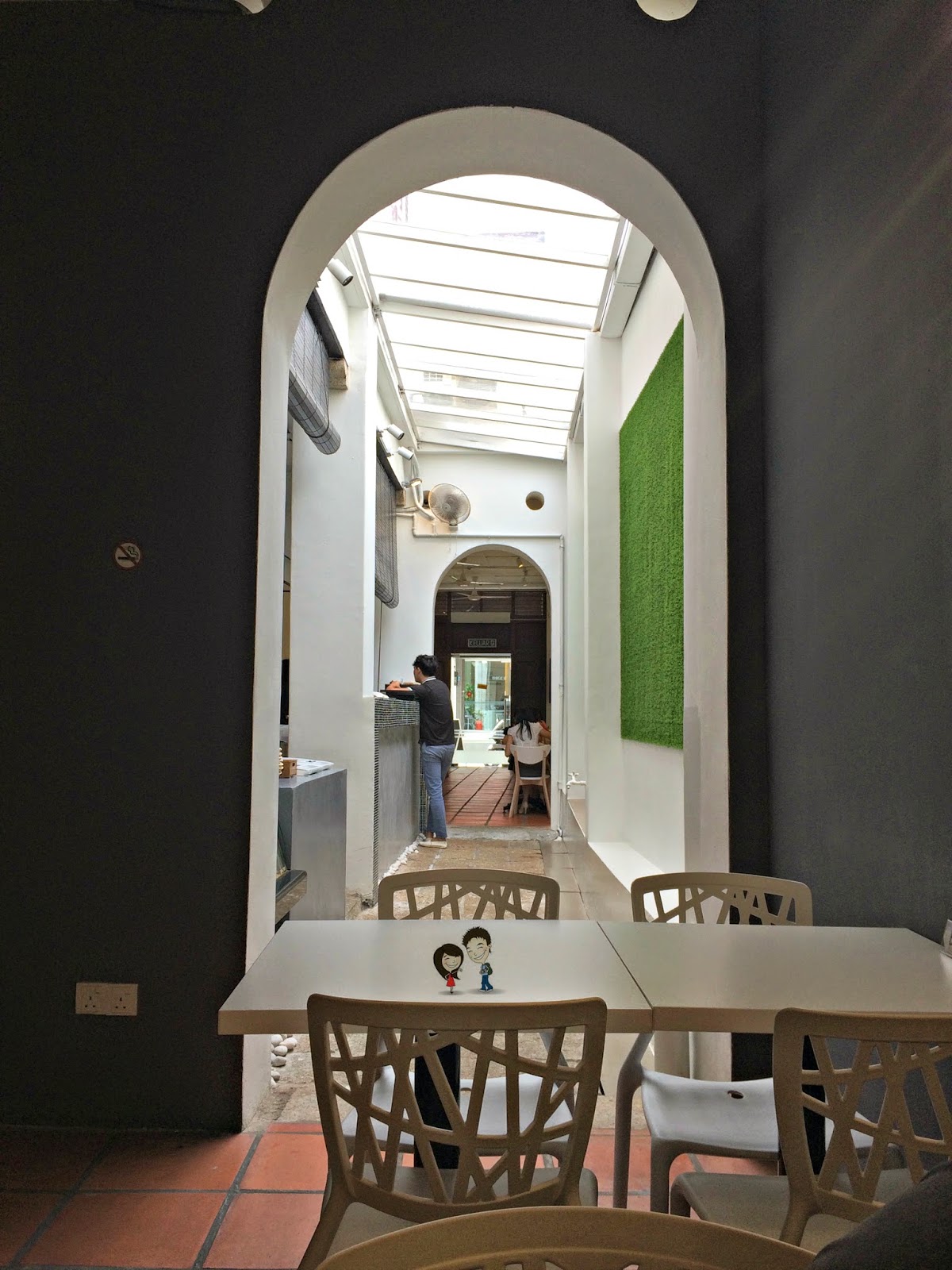 Quite packed during lunch hours. 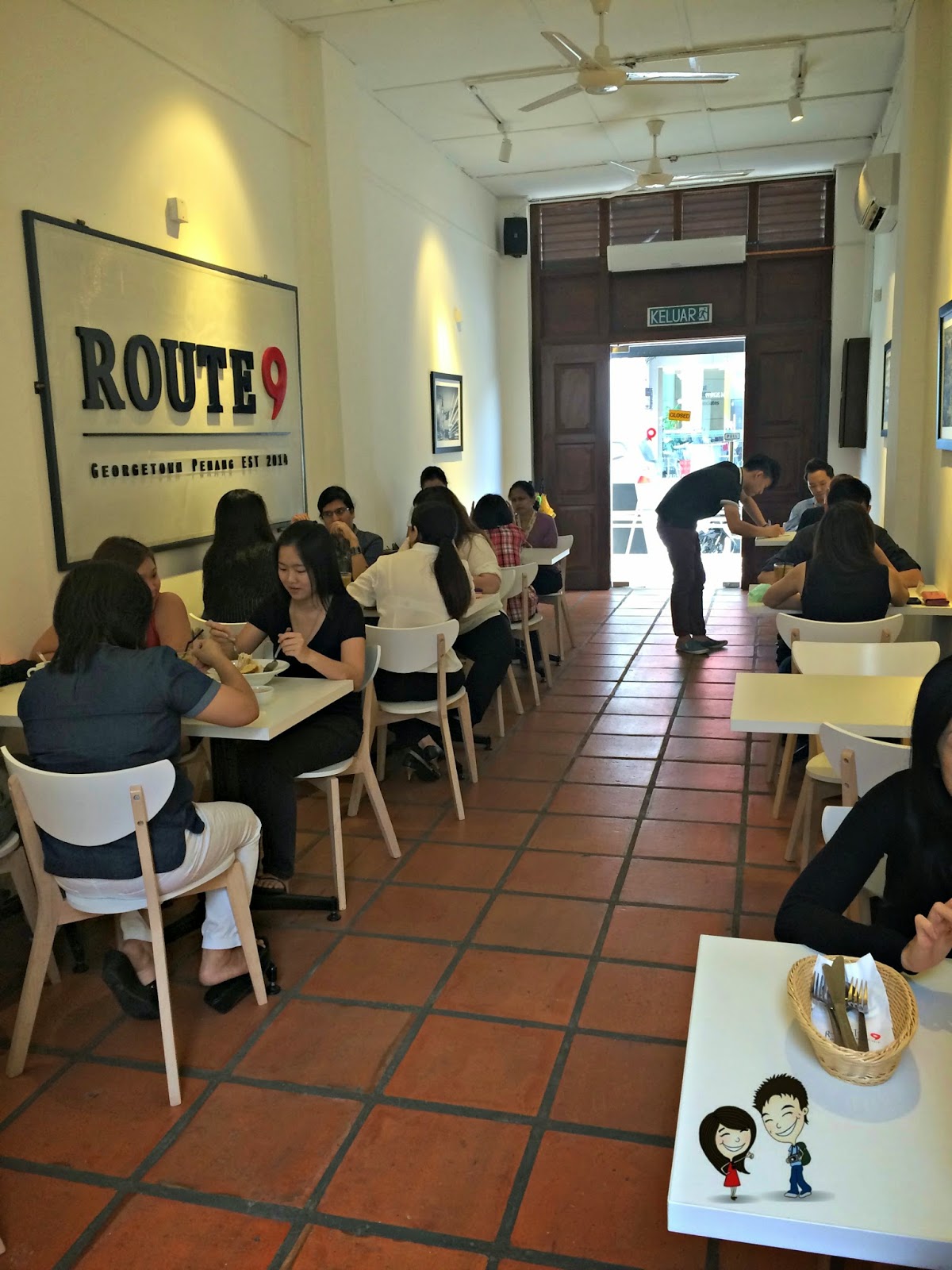 Homemade mushroom soup, garlic bread and a glass of lemon tea/peach tea and dessert - add on RM6 on any main course to enjoy the set lunch promo. 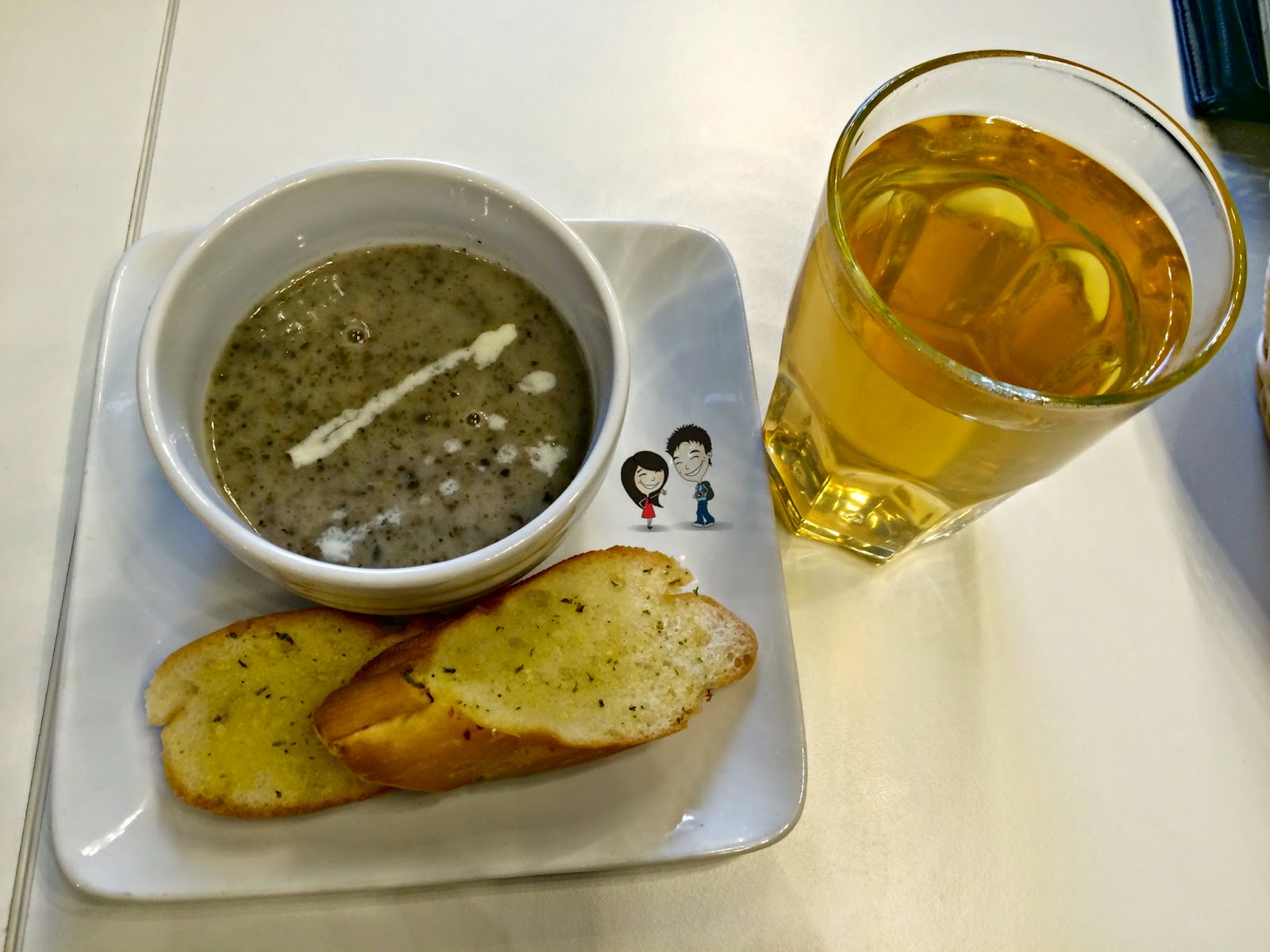 He says: Pretty good. The garlic bread goes really well with creamy mushroom soup. And the peach tea? Tastes like peach tea.
She says: Soup is pretty decent. Garlic bread is nice. How can garlic bread go wrong? Oh wait.. if it's too hard then can. But this one nice and quite soft. The tea is of course normal. I think it's quite okay to add RM6 to make it a set lunch. 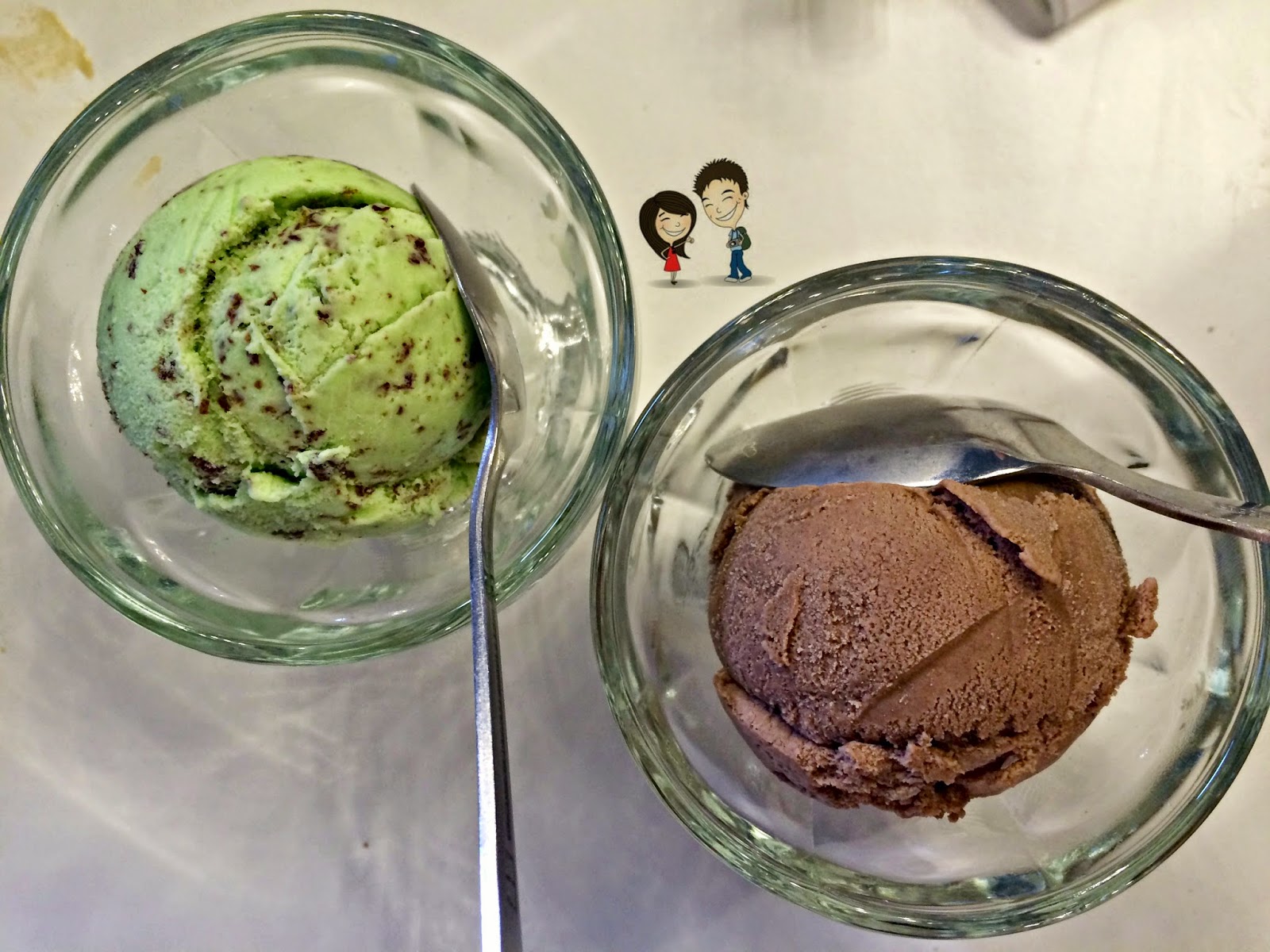 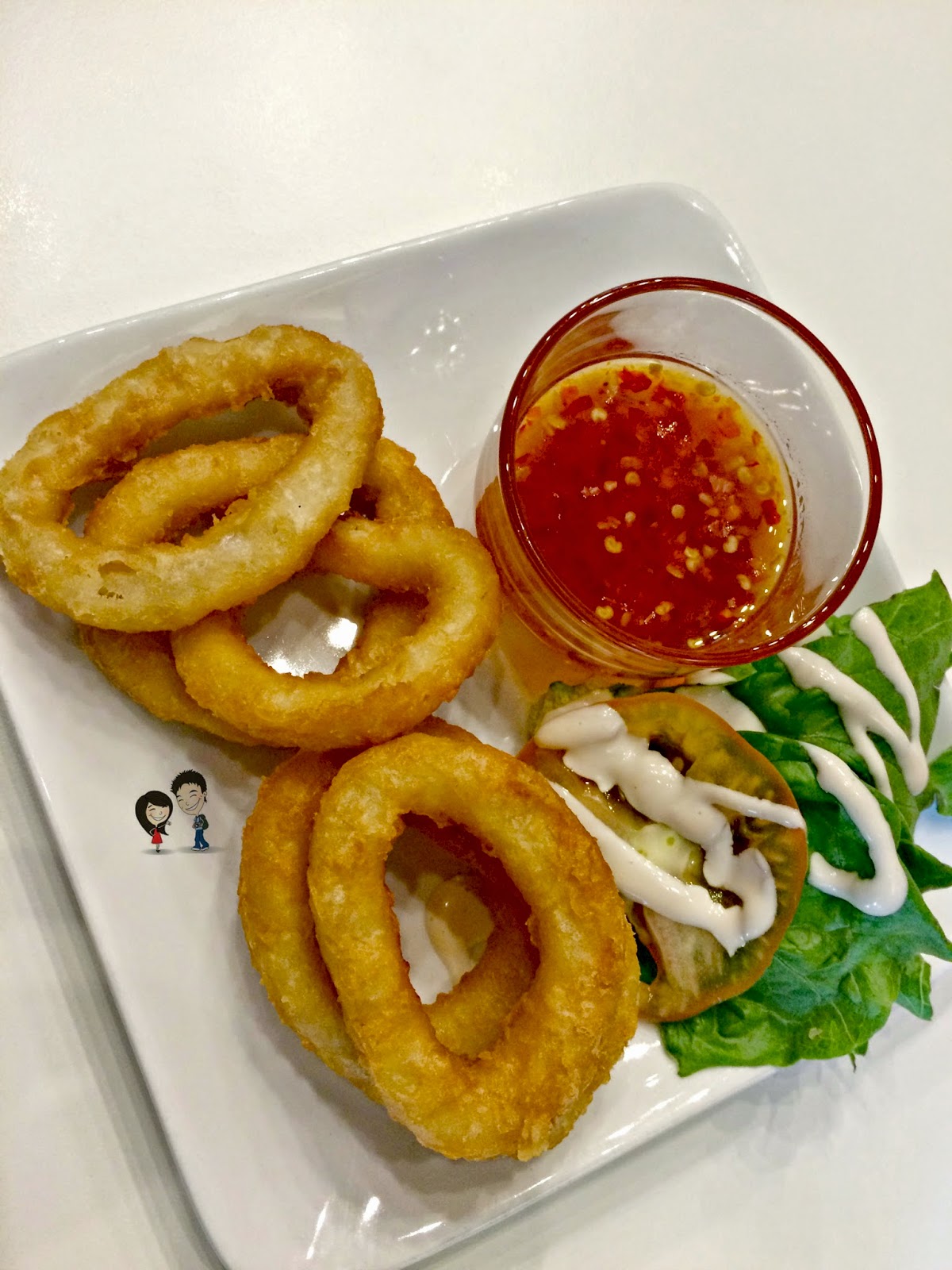 He says: Calamari rings can hardly go wrong right?
She says: Crunchy outside and soft inside and not oily! Love this one. This one is ala carte, not part of the set lunch price. 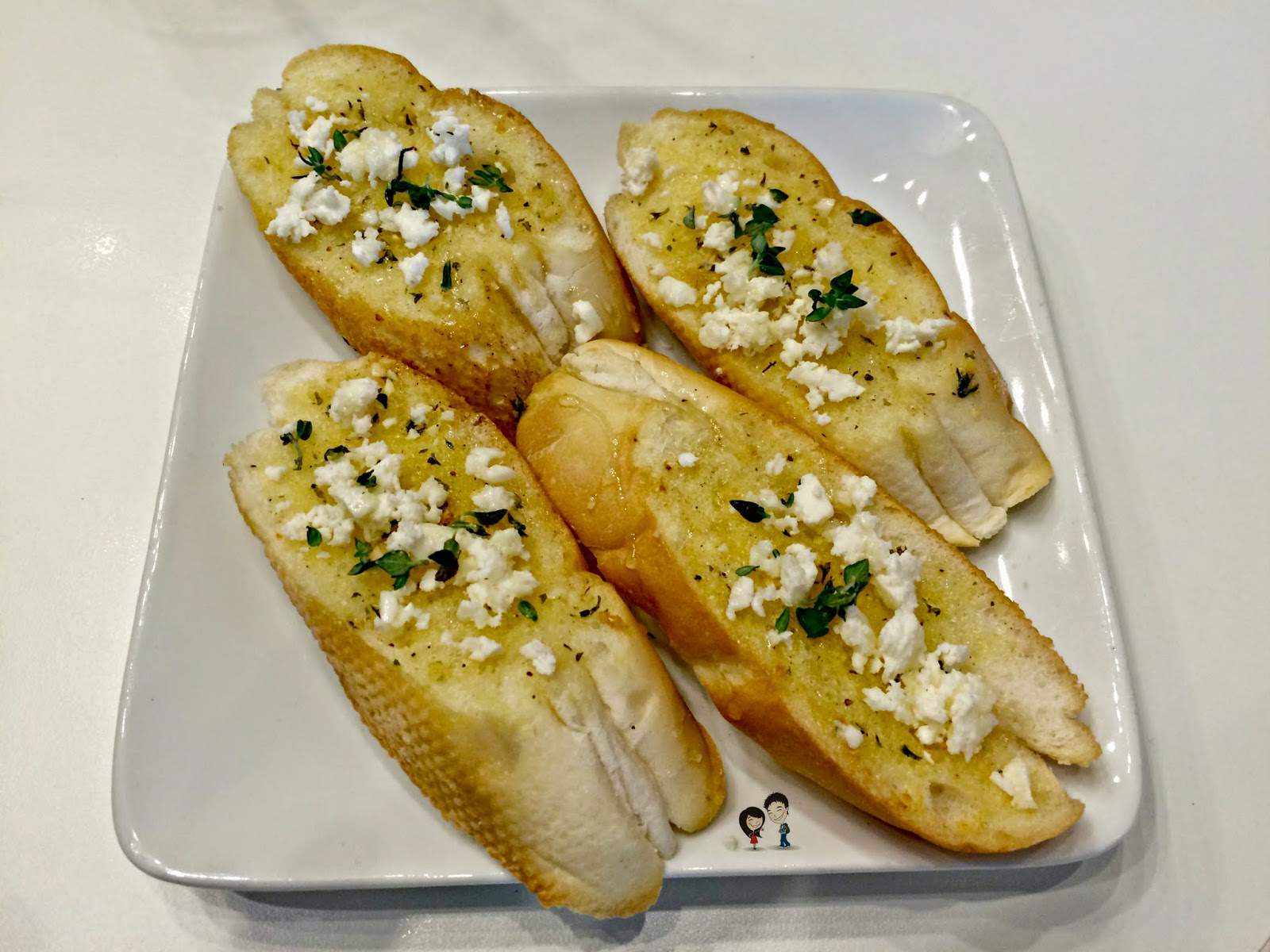 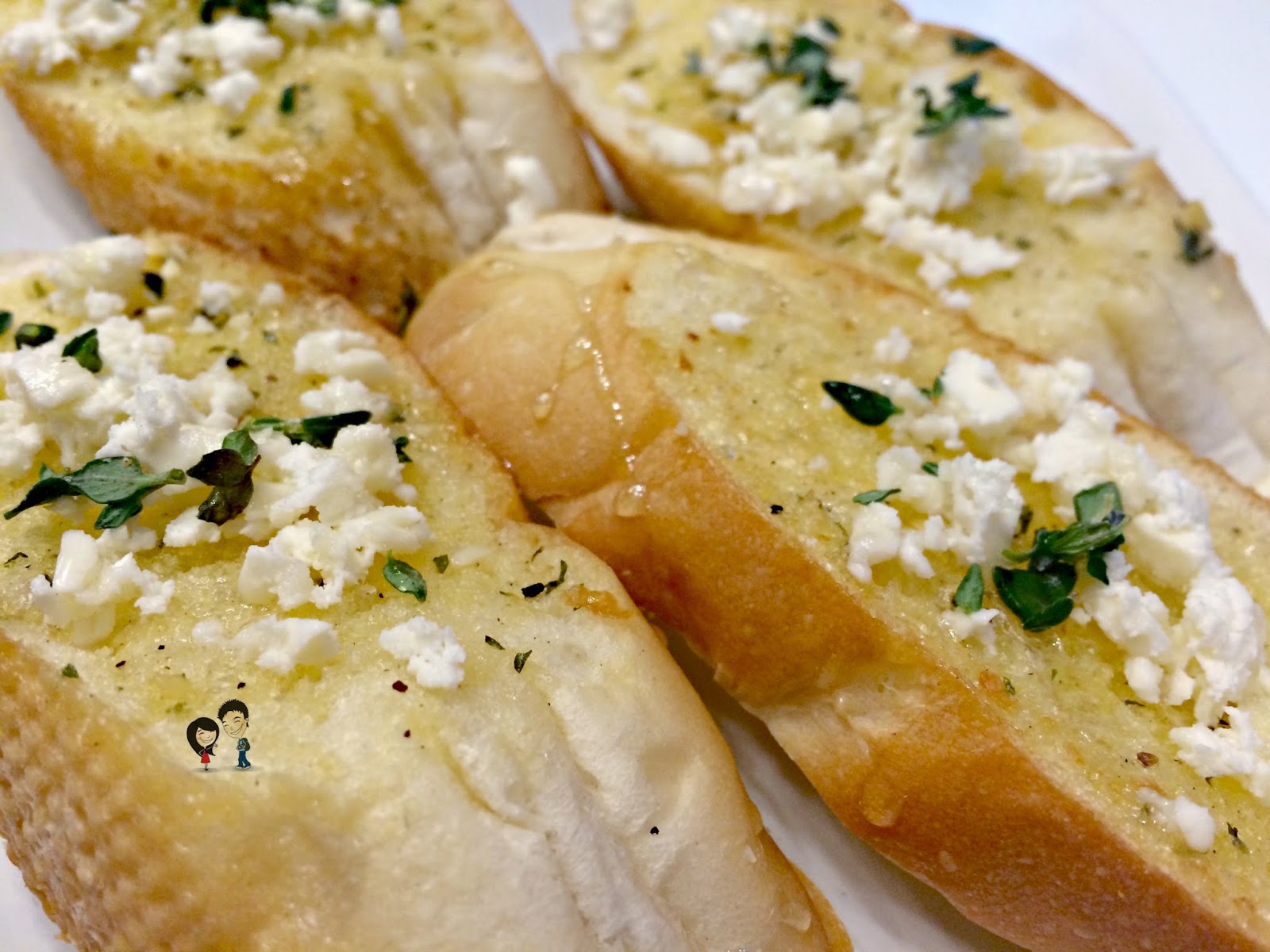 He says: The bread is soft yet crunchy on its sides. Feta cheese made it even better!
She says: The garlic on the bread is amazing. I think it's brilliant to add Feta cheese on top because it gives the salty flavor to it, but they should add more! This one also ala carte, not part of set lunch. 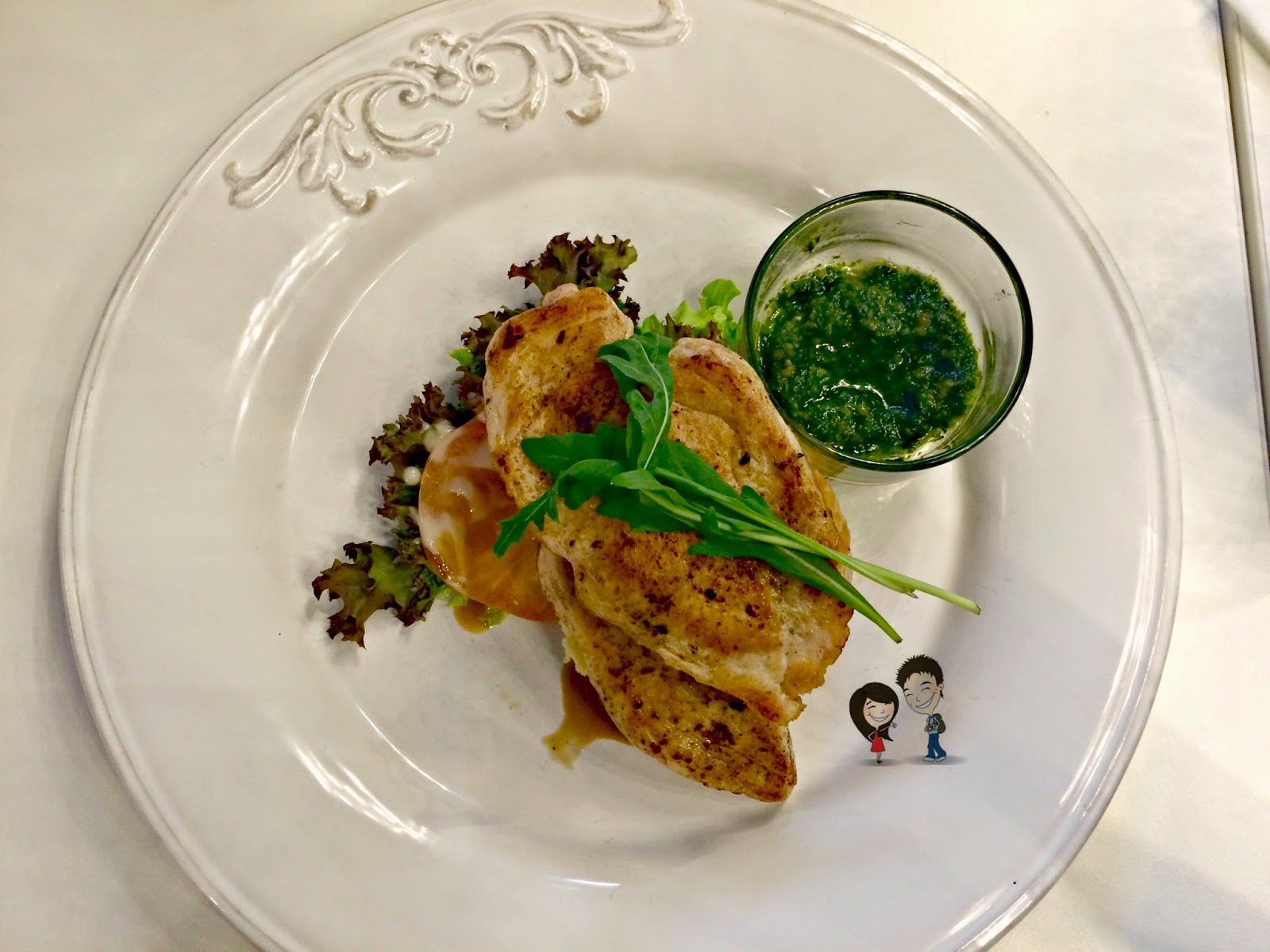 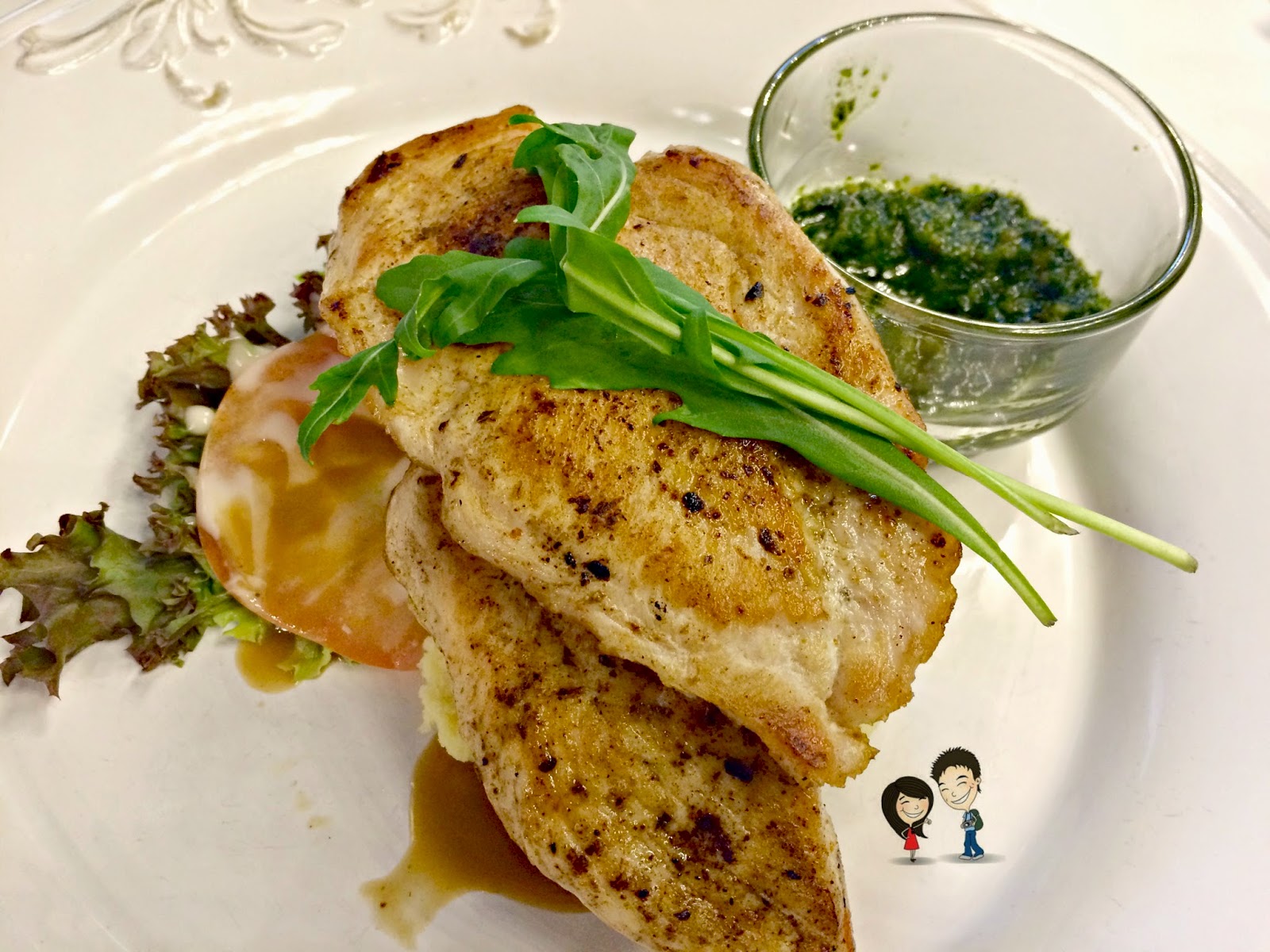 He says: Pretty nice mint/herb sauce to complement with the golden piece of chicken. The taste of the chicken is a little bit dry though.
She says: I normally love chicken breast but this one was a bit too tough to my liking. The basil pesto however was sooooo good. And excuse me Adrian Koay, *points to his comment* IT'S NOT MINT SAUCE! *rolls eyes* HAHAHA. It was a very good basil pesto with a hint of garlic taste to it that did not overpower the basil. One of the best pesto I've tried. Love it. 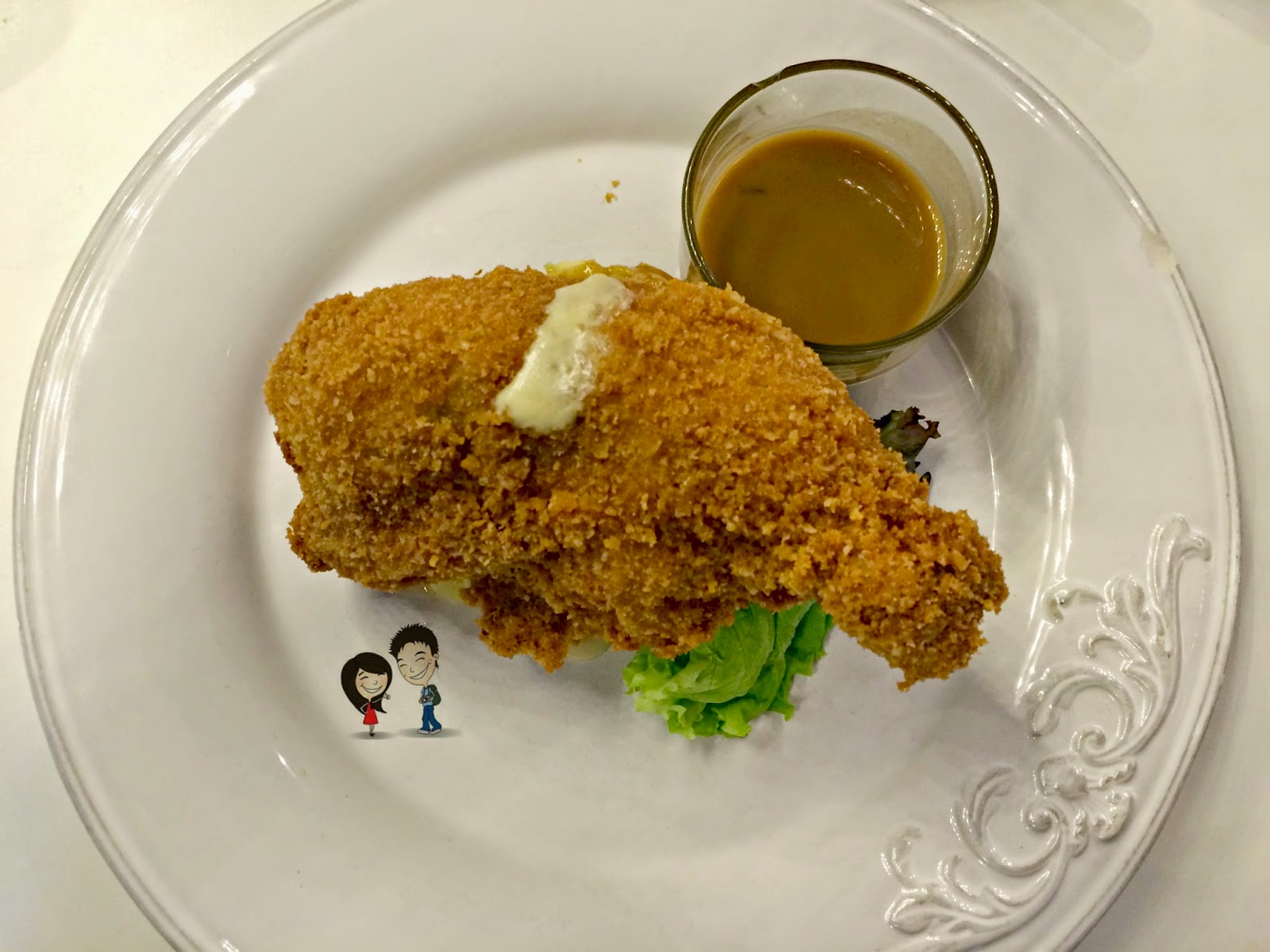 He says: The cheese oozes out like lava as I slice the stuffed chicken. Like it but the sauce could be better if more flavorful.
She says: It's a very big piece of stuffed chicken. I didn't really like this pick. Well, if this is a Chef's Pick, then I think they should modify it or add something to give it more oomphh. I had three bites and I didn't want more after that. 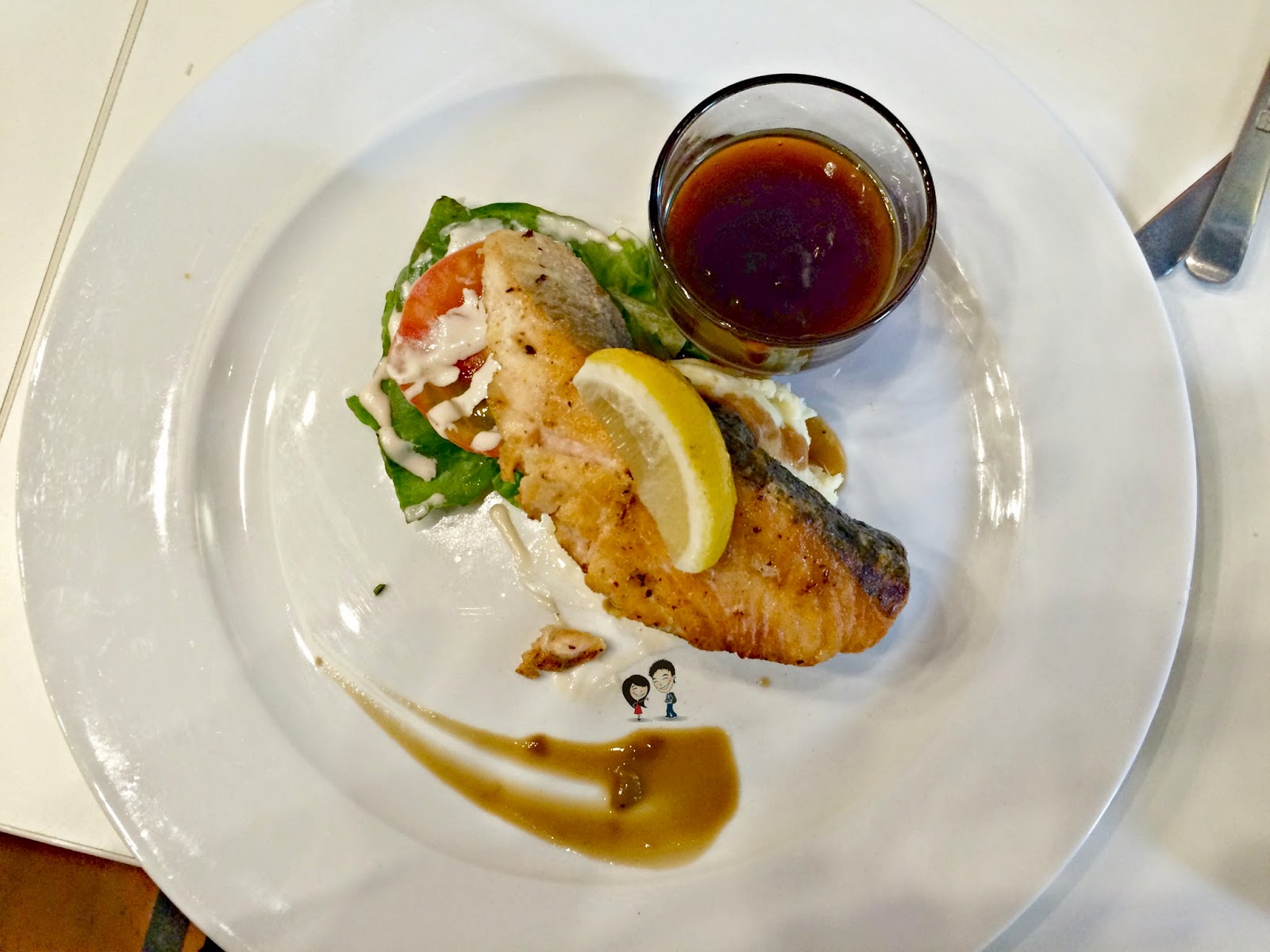 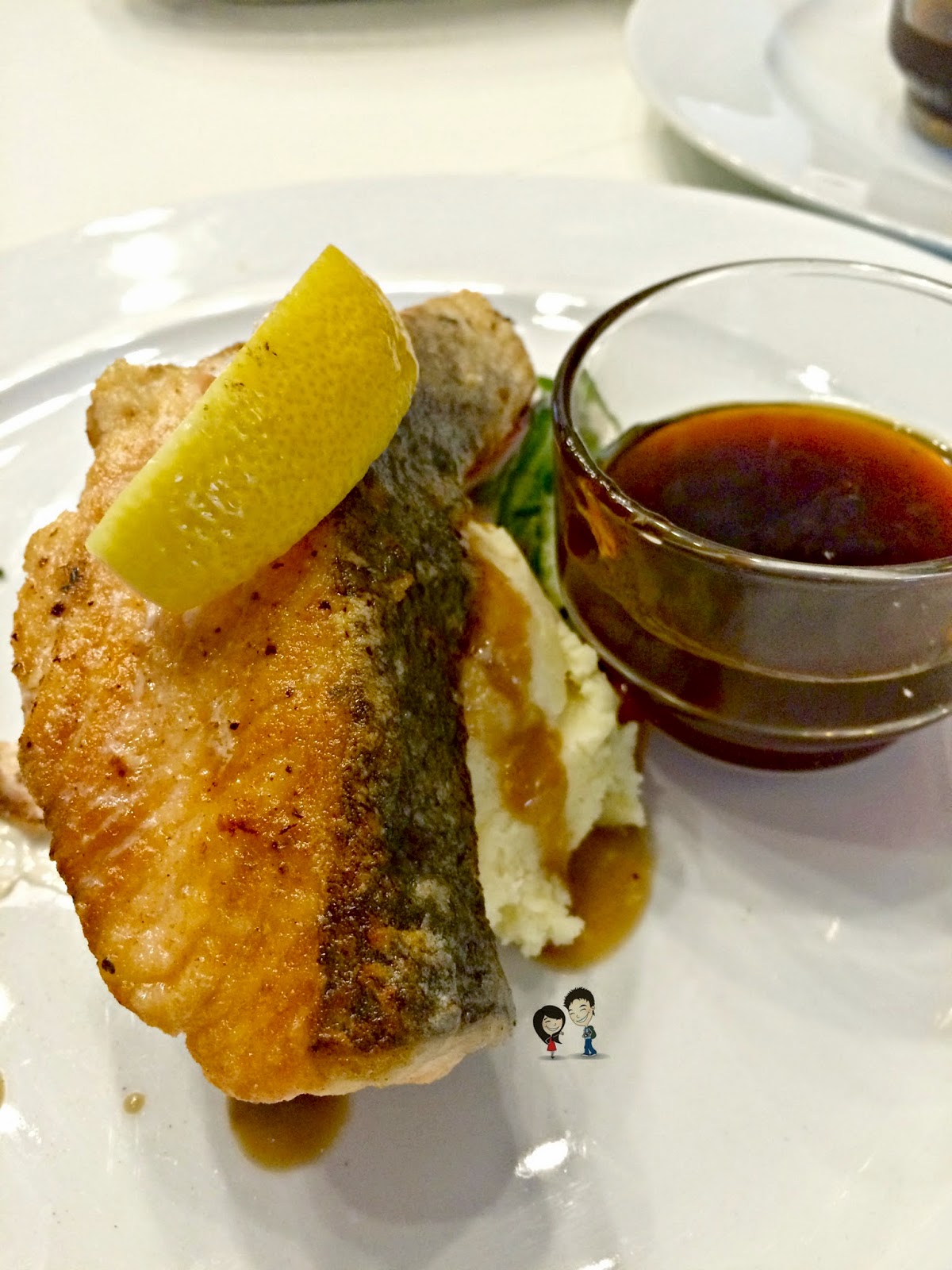 He says: A no no for me to order that again.
She says: The teriyaki sauce is very starchy so it's kinda not very nice to eat. Salmon is just bleh. 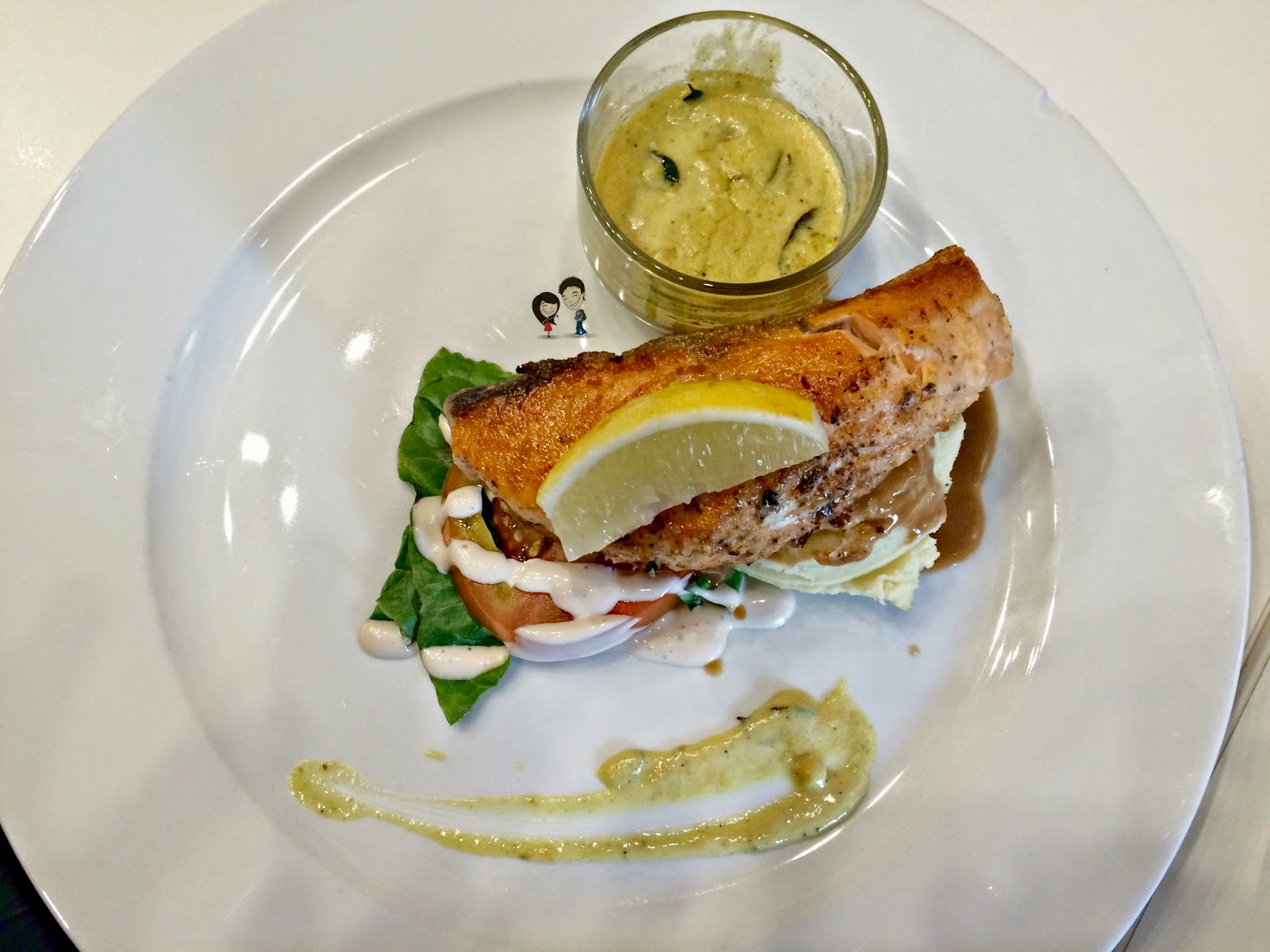 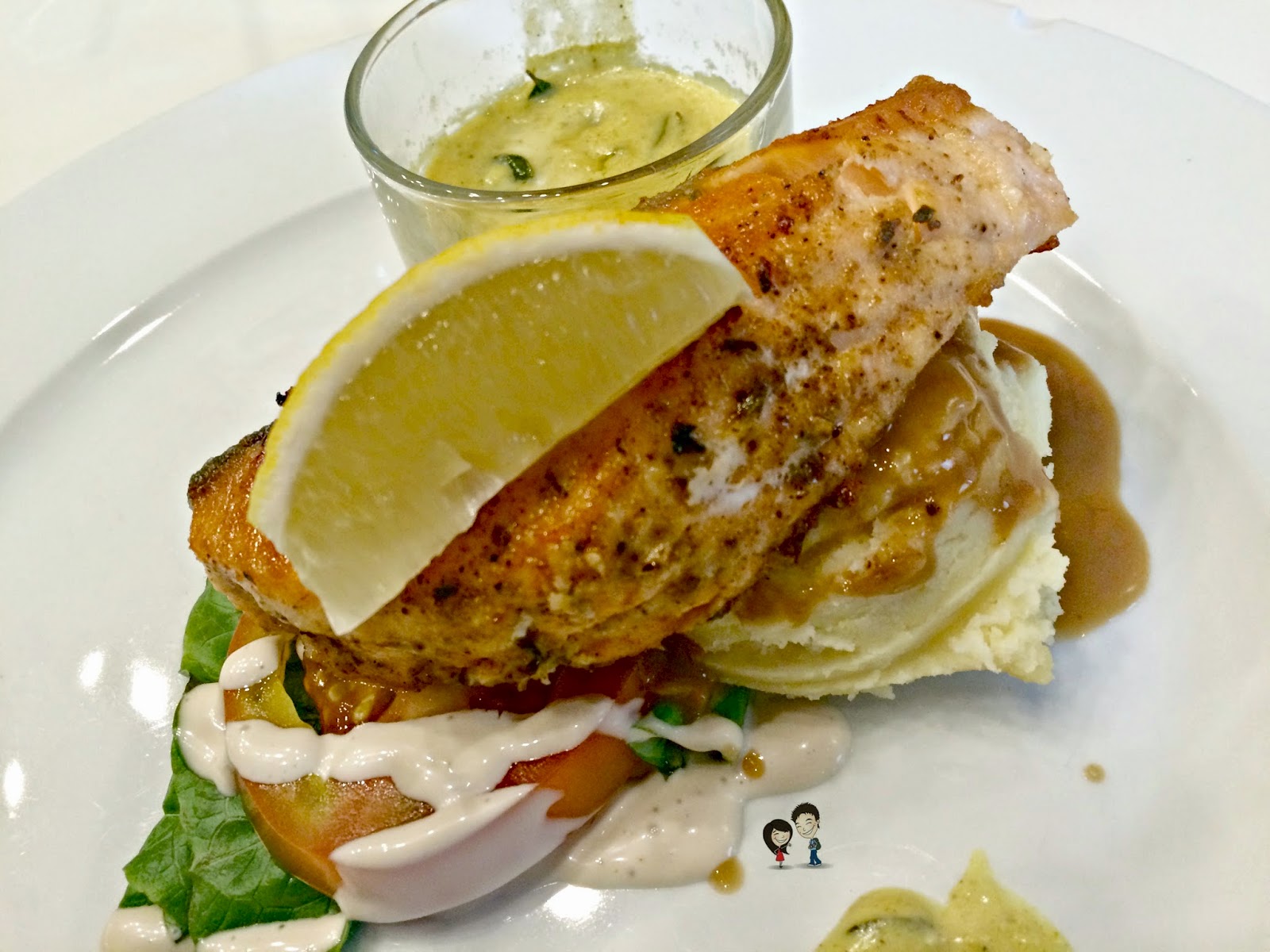 He says: The cumin is a lot better than the teriyaki sauce but still, a lot can be improved.
She says: Salmon fish was neh. It's not crunchy outside on the skin so it's like quite sad lah. The cumin sauce, I don't think goes well with this fish but the sauce itself quite creamy and yummy. Very indian-ish flavor. 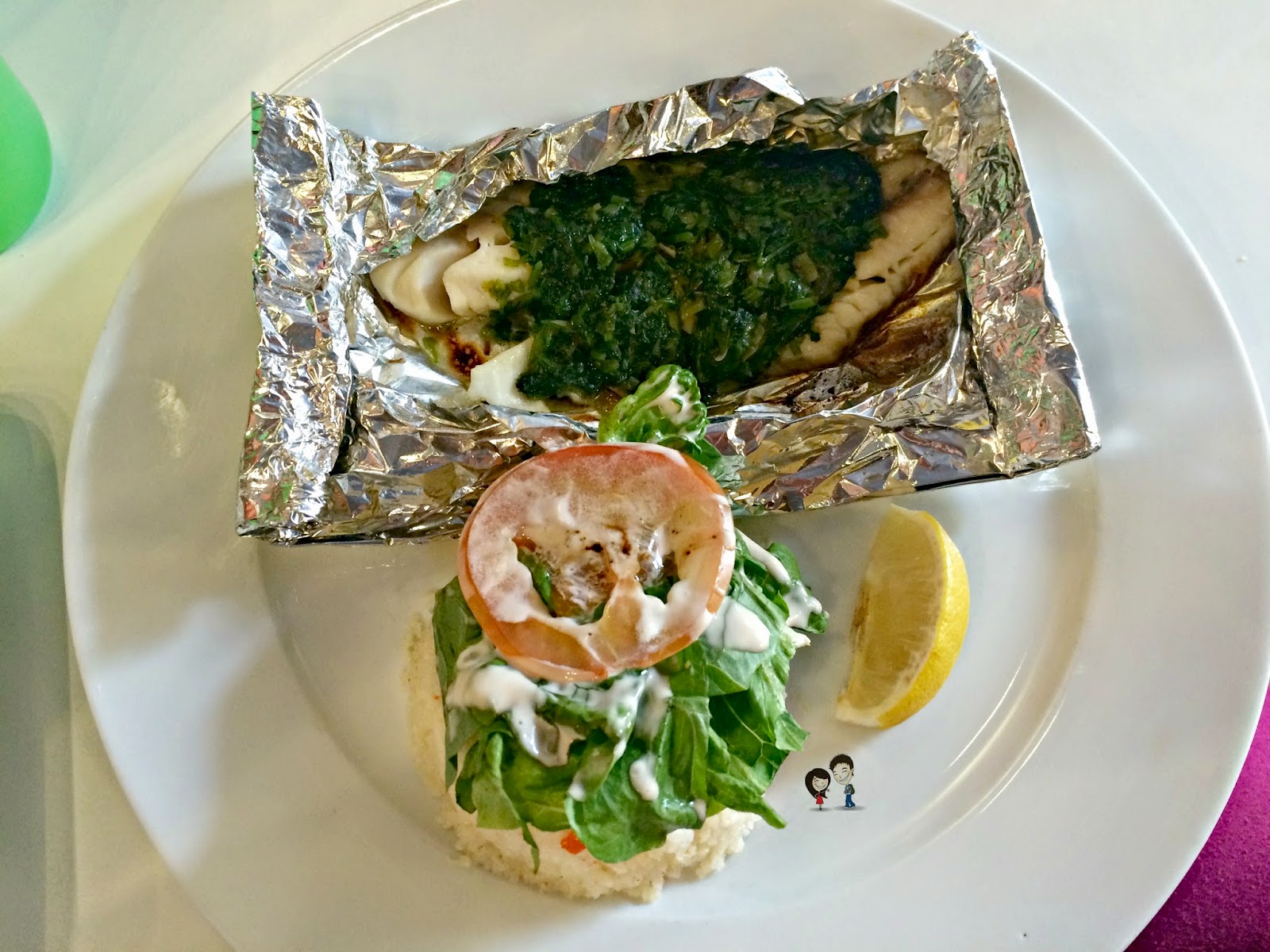 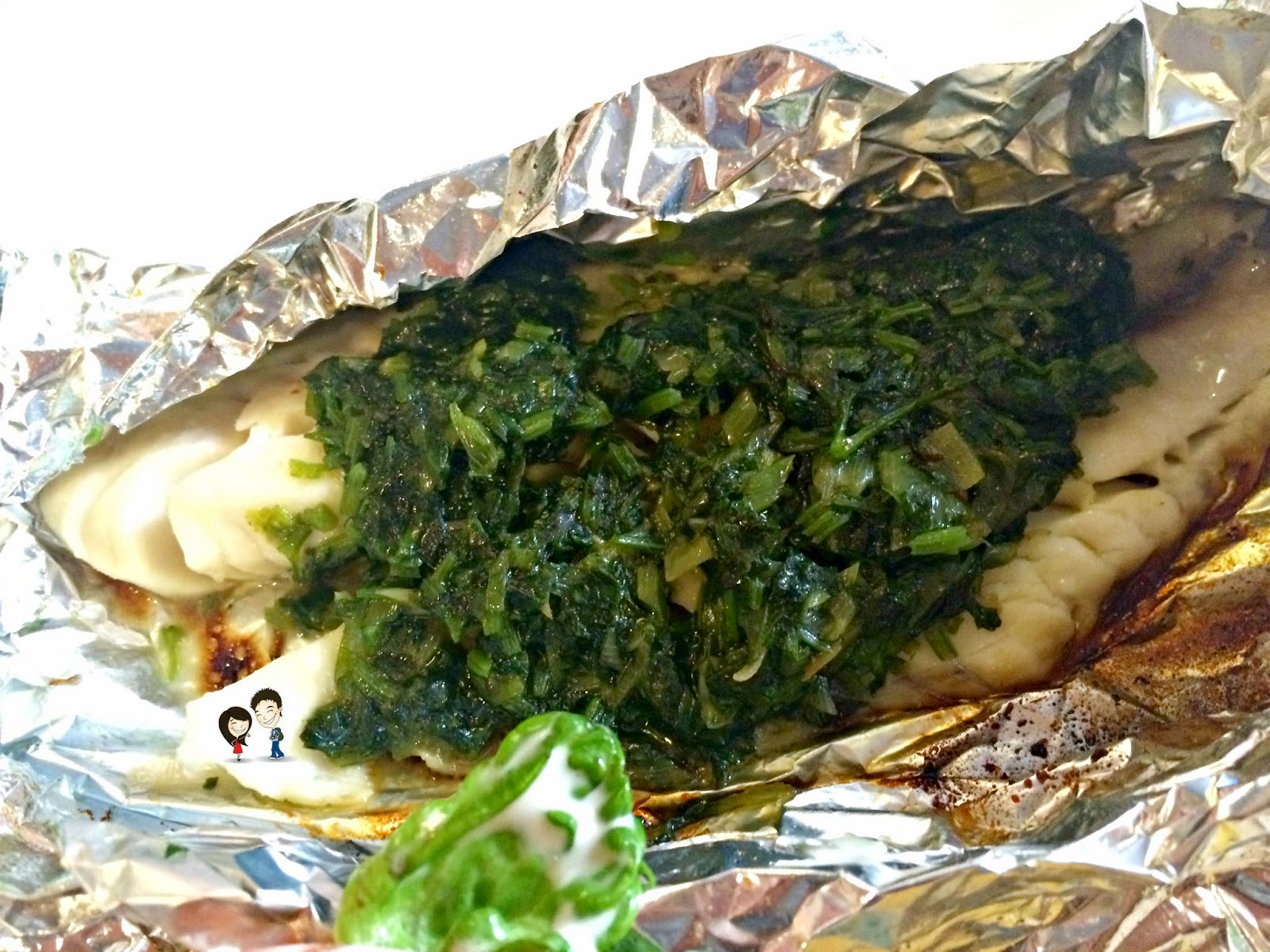 He says: Like this one. Somehow the fish tastes fresh and the coriander topping is awesome. Butter rice is little bit sticky though and could be better.
She says: The fillet is quite small. The best part (the skin) is glued to the foil so that's a waste. End up I had quite small portion of the entire fillet. The butter rice is amazing! Love the rice. The coriander herbs on top also very yummy. 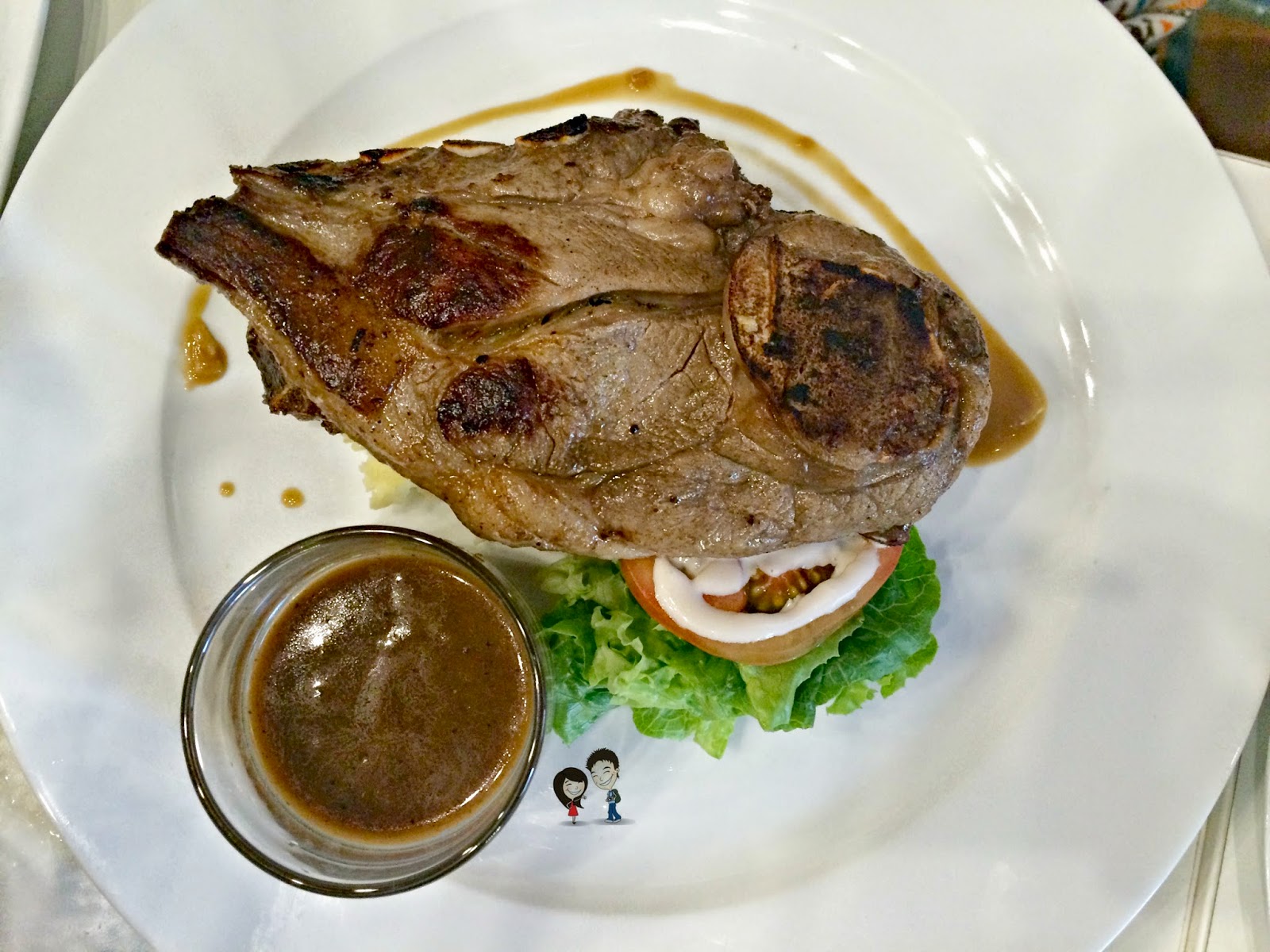 He says: Grilled nicely. The black pepper sauce is not bad.
She says: The sauce quite starchy. The lamb very big piece and grilled nicely. Not too hard. 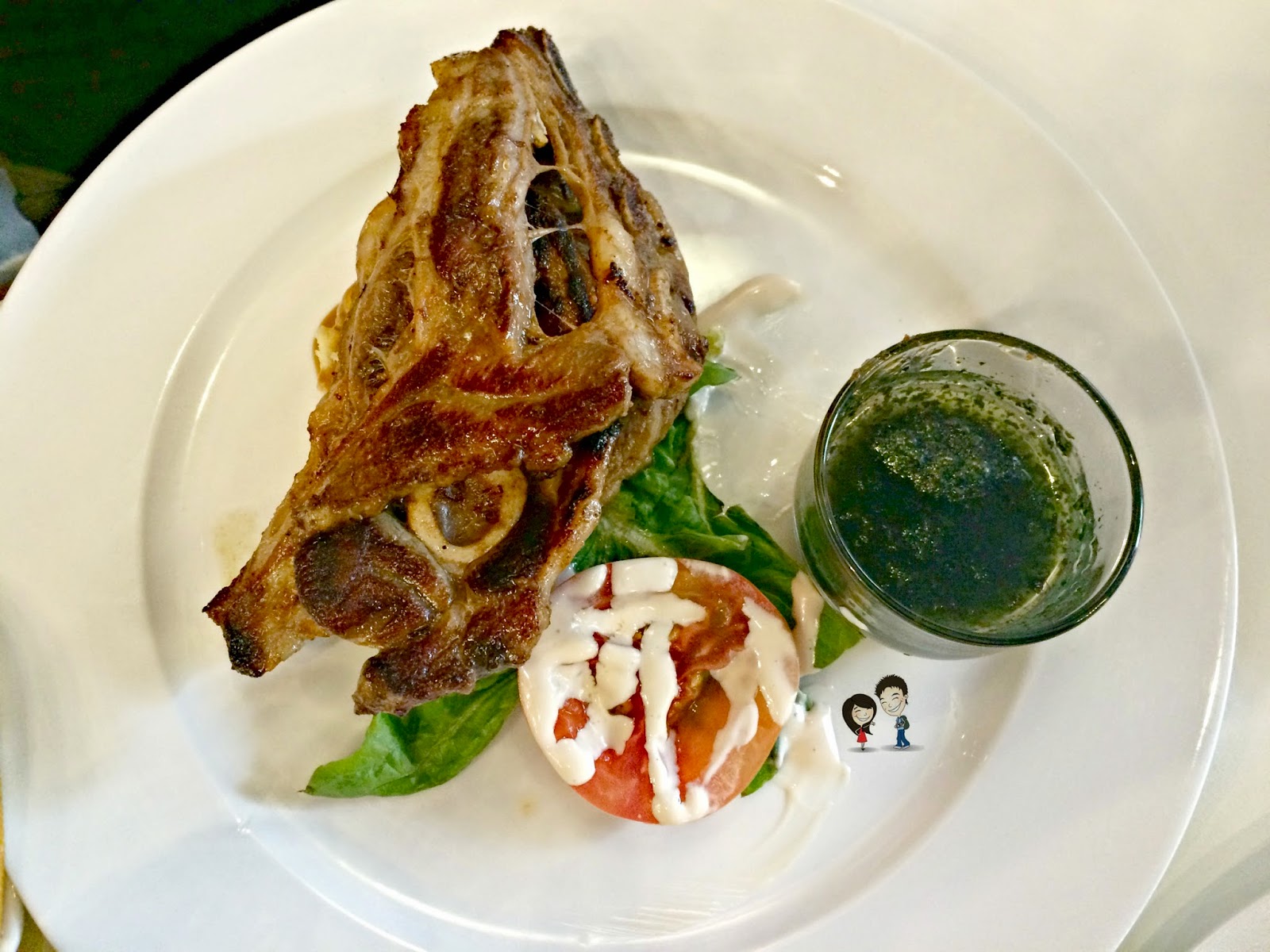 He says: Mint sauce tak cukup oohm. But boleh tahan la.
She says: The mint sauce is super nice. If it's a little thicker then I think it would have been one of the star dish. 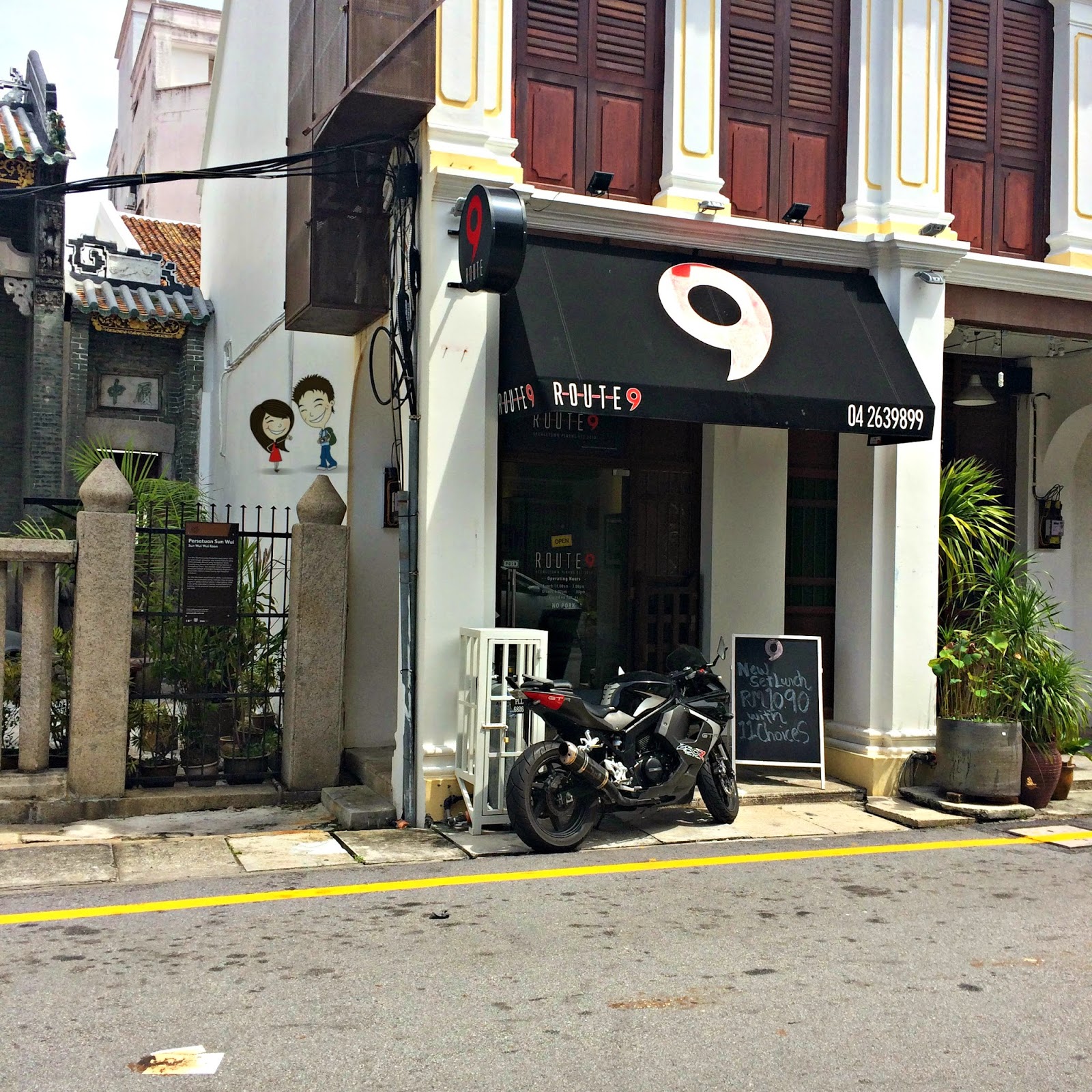 Ratings:
His rating: 6.5/10
Her rating: 7.5/10
Posted by WhatTwoEatHere at 12:24 pm
Email ThisBlogThis!Share to TwitterShare to FacebookShare to Pinterest