Yess. Whenever need to travel to eat good food at places like Tambun, we've gotta go with a bunch of our lovely friends! More people, more happiness!

We have been planning this for quite a while now since it's pretty difficult to get everyone on this amazing seafood-trip! We left Penang quite early in the evening so that we wouldn't ba caught in the jam and if not mistaken, it was a public holiday the day after. I think..

So yeah.. so many seafood makan place in Tambun right and as usual, we all couldn't decided. We are all very polite and nice so the word "CINCAI LA" or ÄNYTHING LA" is always heard whenever we are all together!

Since we food bloggers and no one else wants to decide which one to go to, we both decided we would bring them to this place. Some of them also have been here so here it is! :)

Oh ya. There were in total 10 of us! Just nice to fit a round table. And one more thing, do wear long pants if you do not want to be friendly to the blood-suckers.. 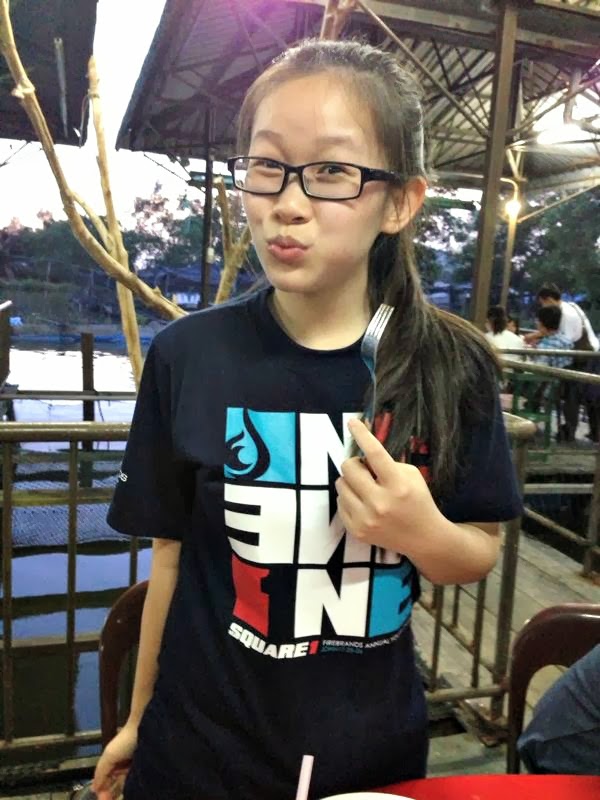 You can't see the restaurant by the roadside, so you've gotta drive slowly when you are at the road leading to it. Once you're in the restaurant, you'll see that the place is huge! Surrounded with water and their very own fish-farm. 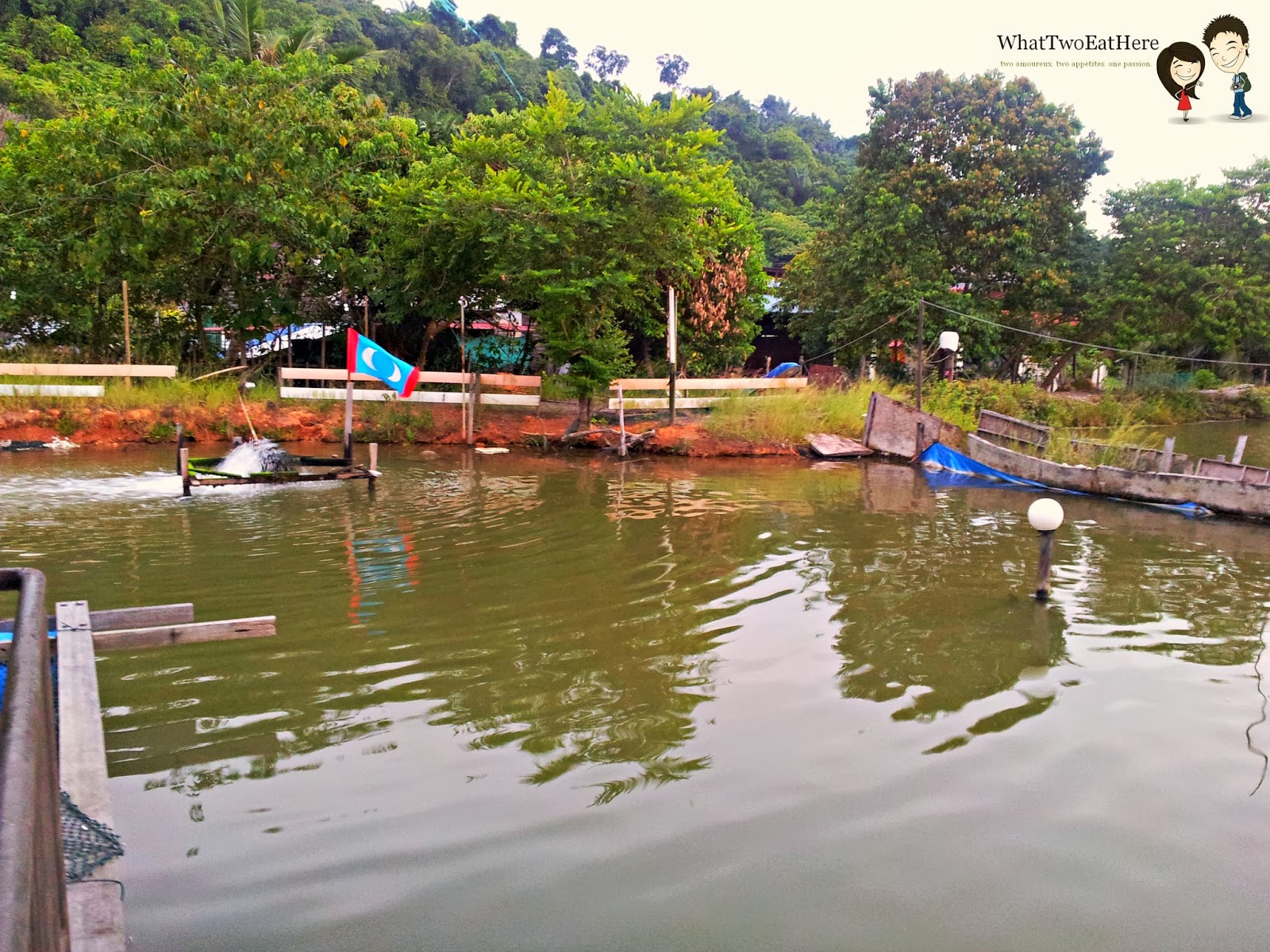 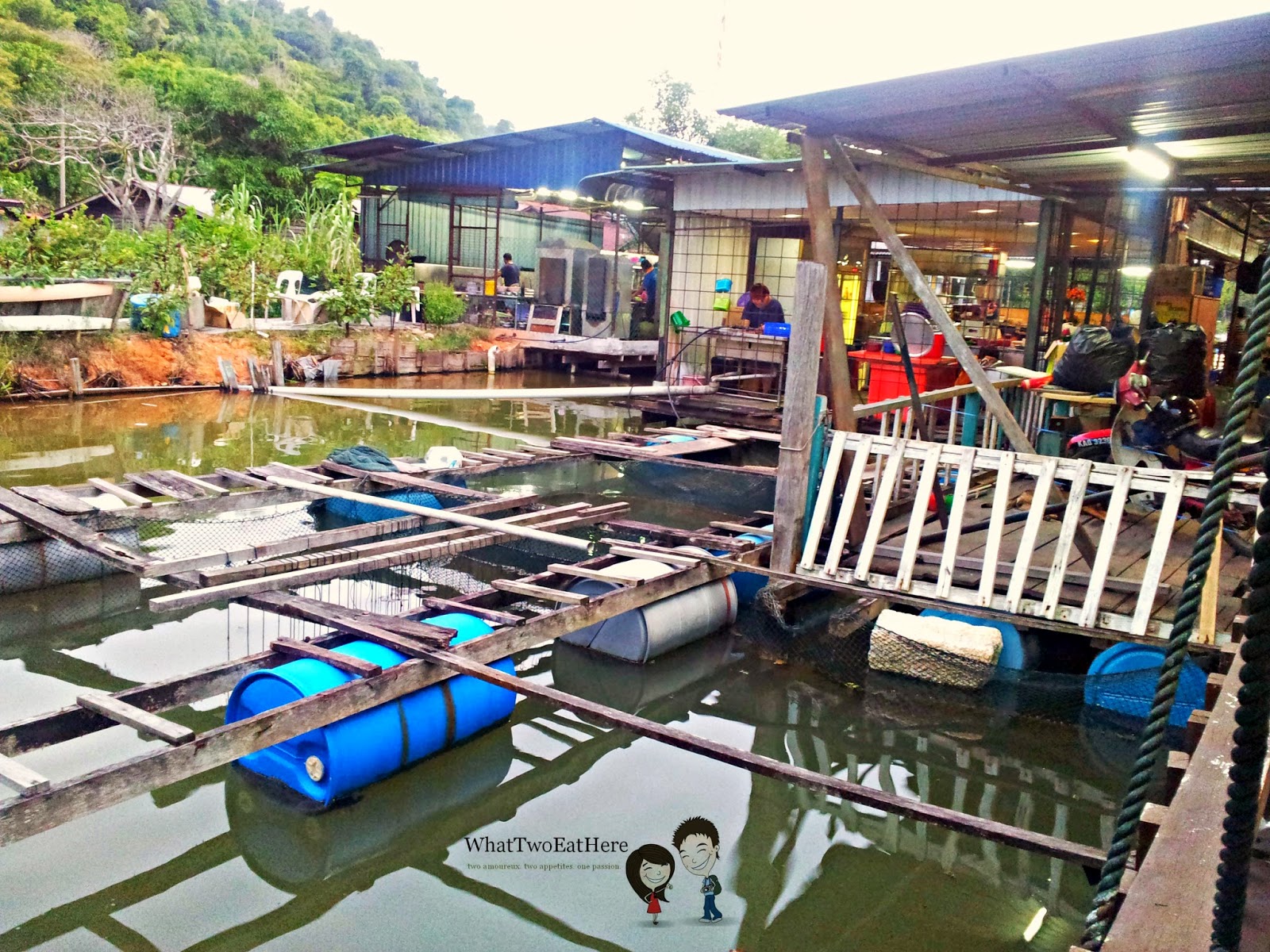 Appetizer has got to be this: HELICOPTER shell seafood (RM12) 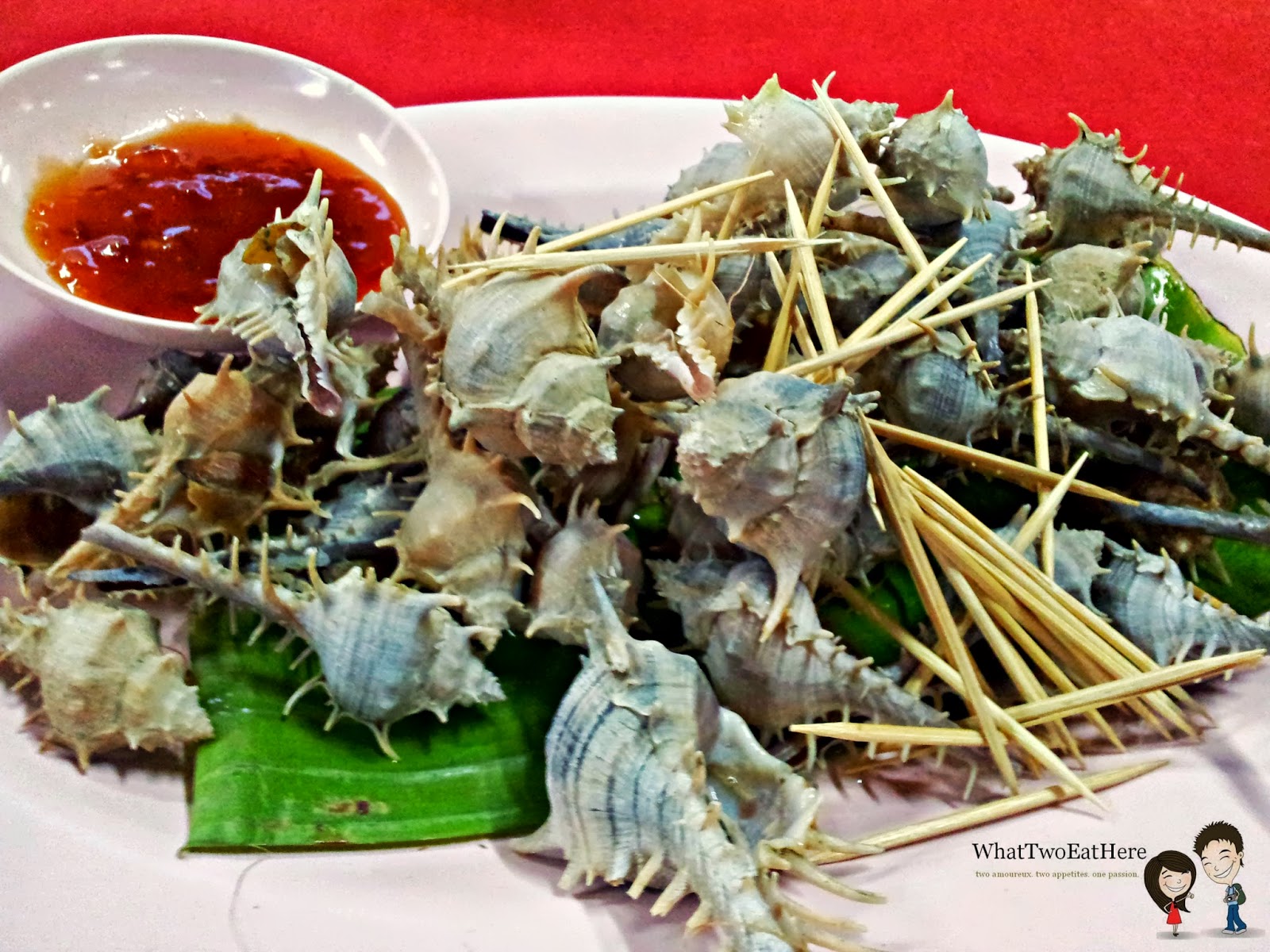 He says: I kinda enjoyed digging out this creature hiding inside the 'helicopter'. Hahaha. Tasted normal but it compliments with the chilli sauce nicely.

She says: Quite fresh. The treasure inside quite easy to be dug out.

Sharon says: They were just an 'okay.' 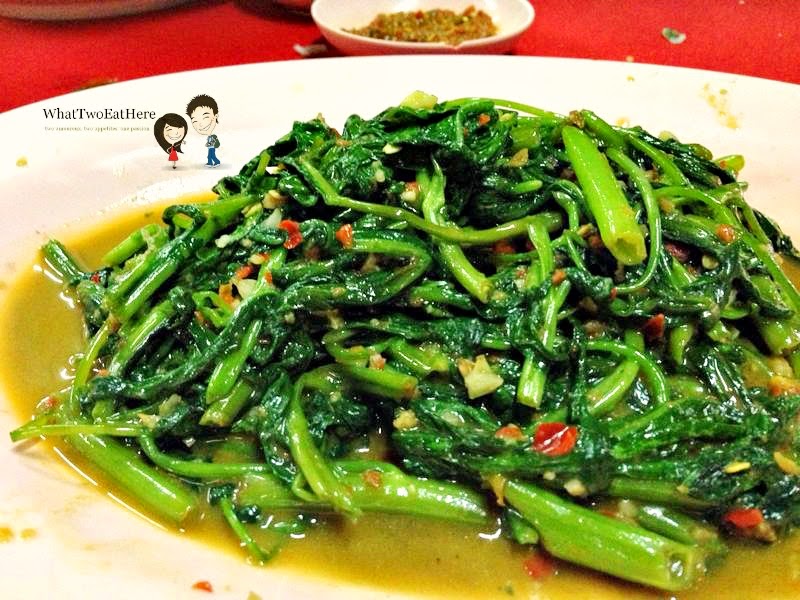 He says: The ratio of belacan in there is definitely more than the sambal! But its okay overall.

She says: Quite a standard kangkung belachan.

Sharon says: You can never go wrong with kangkung. I've liked mine to have a little more spicy and less of that belacan in there though. 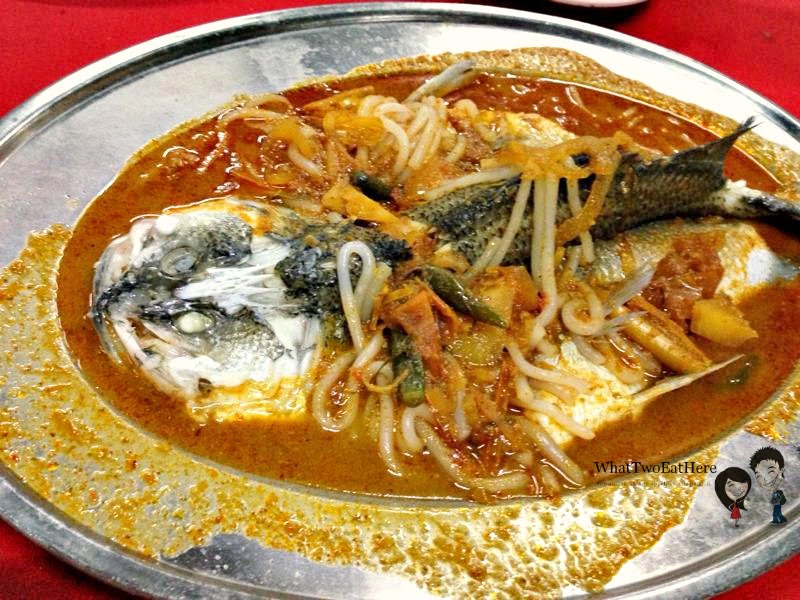 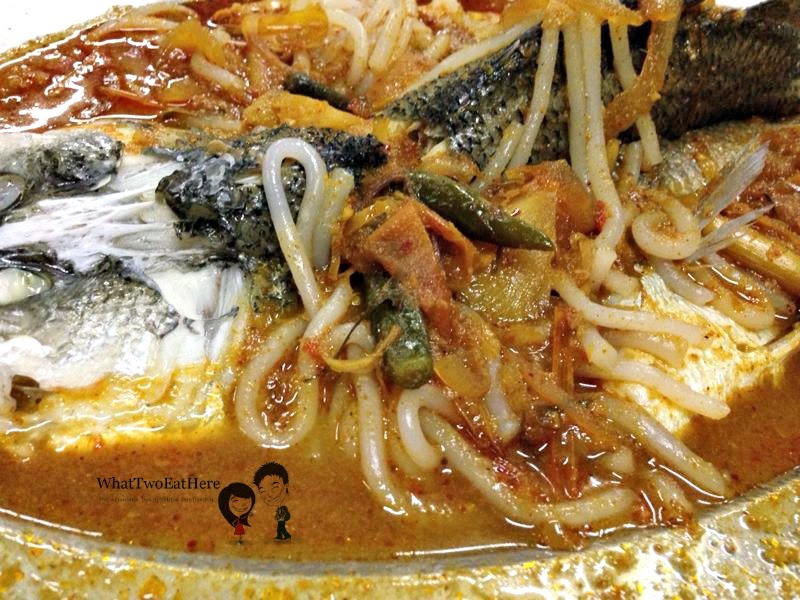 He says: My first time trying this kind of dish! It is spicy, sweet and sour. All in one!

She says: Really tasted like laksa. The sauce is very unique. I have seen/eaten steamed fish with laksa sauce before so yeah, this one quite tasty.

Sharon says: This was probably an added variety among the array of other dishes. I'd say a good difference from the conventional Teochew-based steamed fish. I've tasted better ones though, but nonetheless the combination of sweet, salty, and sour complemented the overall taste of the fish and turned out to be a cohesive dish, nonetheless. 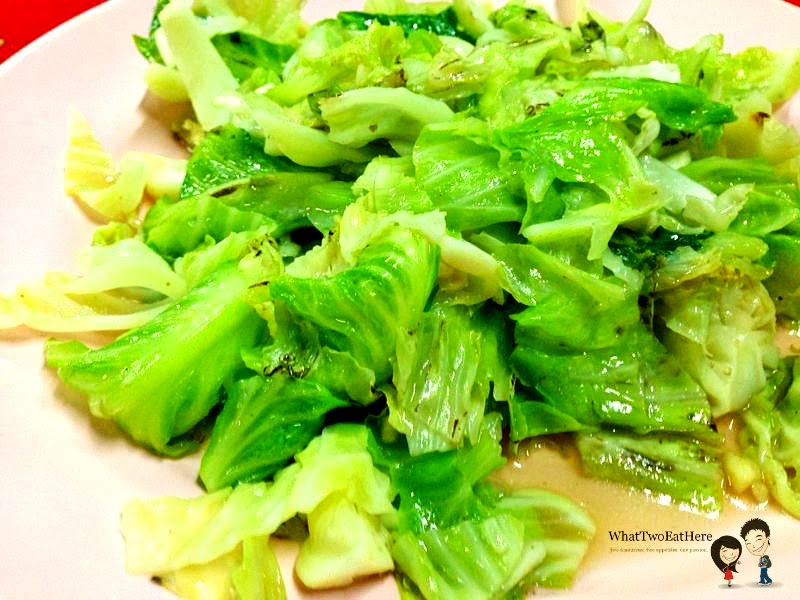 He says: Usually stir-fry brussel sprouts. The thing is "chai tahn" always taste so good to me. Haha. The crunchiness!

She says: I know its just a stir fry vege, but this one very yummy! So yummy we wanted to order serving number two but no more d.

Sharon says: With the right amount of crunch in texture, and proper seasoning; this was a good dish, overall. No arguments here! 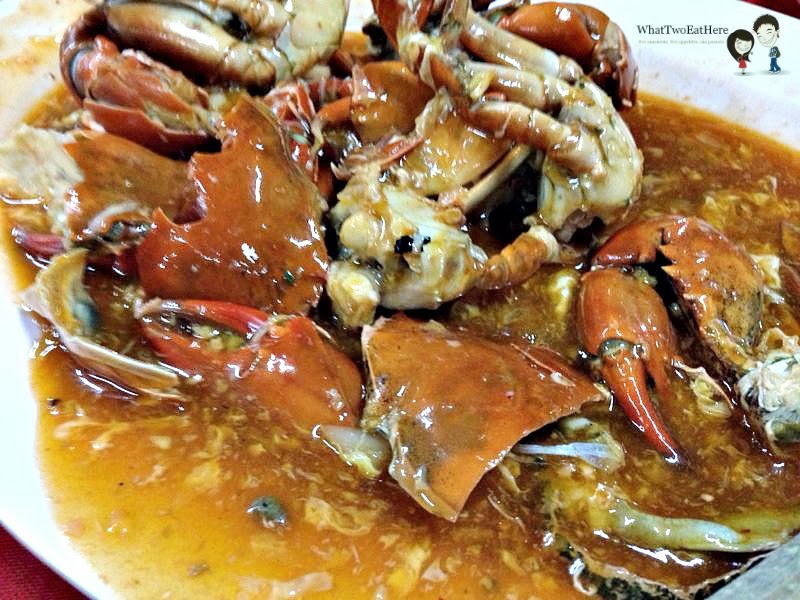 He says: Not a big fan of crab. So hard to eat! Have to peel/crack/peel the shell all. Grrrr.. haha. Anyways, this one is not bad.. A bit too sweet though..

She says: CRAB! MUST HAVE AT A SEAFOOD MAKAN PLACE! The sauce is okay, nothing very special to shout about! Still, fingers licking good though!

Sharon says: Crab never did interest me. The sauce could've been much thicker with a more robust flavor. There was ideally no punch to it, the kind of punch you'd get from other chili crab on the island. Did not have the chance to eat the meat, but by the looks of it, there was not much. 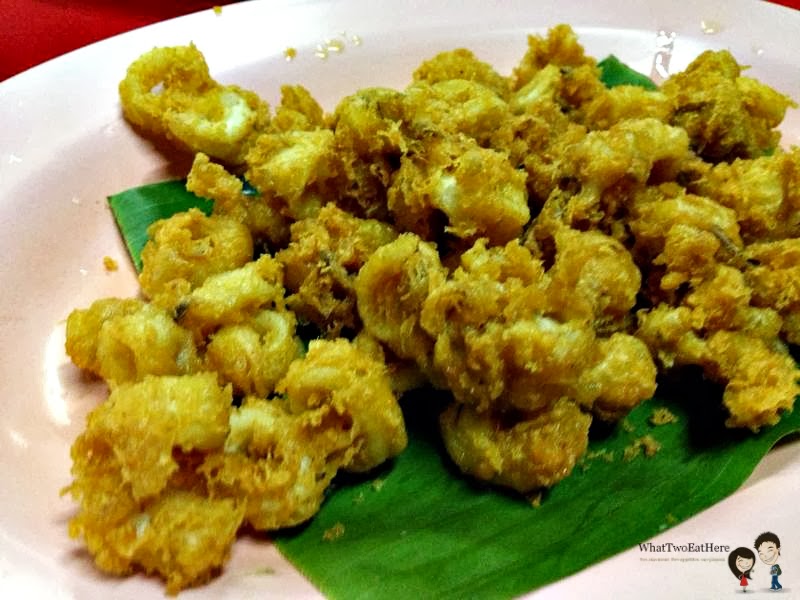 He says: How good or bad could deep fried calamari go?

She says: Very addictive! After pop one into my mouth, and I find myself keep popping more. Love this.

Sharon says: Batter was well-seasoned with just the right touch of salt and pepper. Squids were also fresh and size-wise, easy to chew. Definitely one of those things you'd pop in your mouth every now and then with all the other dishes going on. 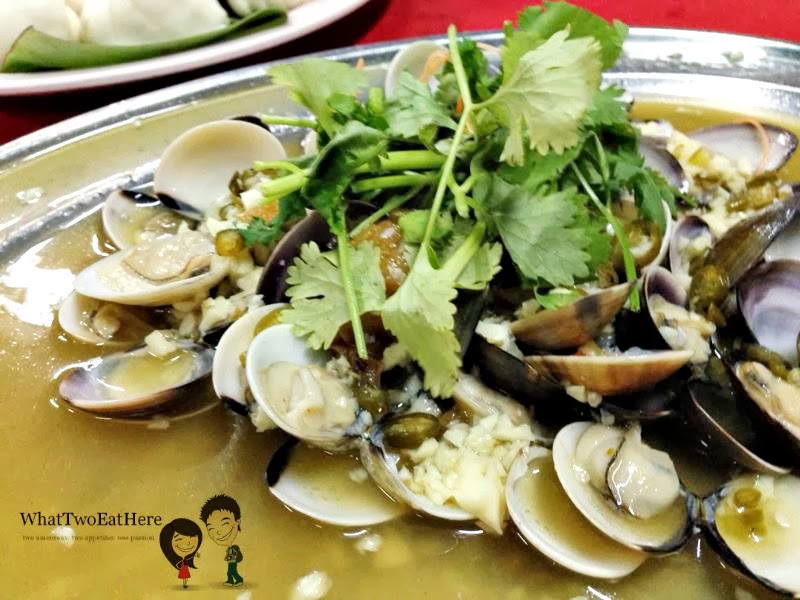 He says: Weird taste. Not going back there for that. =S

She says: Steamed clams. Hmmm.. This one I think not many people will know how to enjoy.. I don't really like it..

Sharon says: As much as I totally get the whole flavor combo this dish's got going on, - a little chinese parsley, ginger and a dash of rice wine - it certainly didn't do much justice. The rice wine was much more than there should've been and totally rid off any hint of good clam flavor. Yes, it was that overwhelming. Forget clam flavor, the clams weren't fresh either. 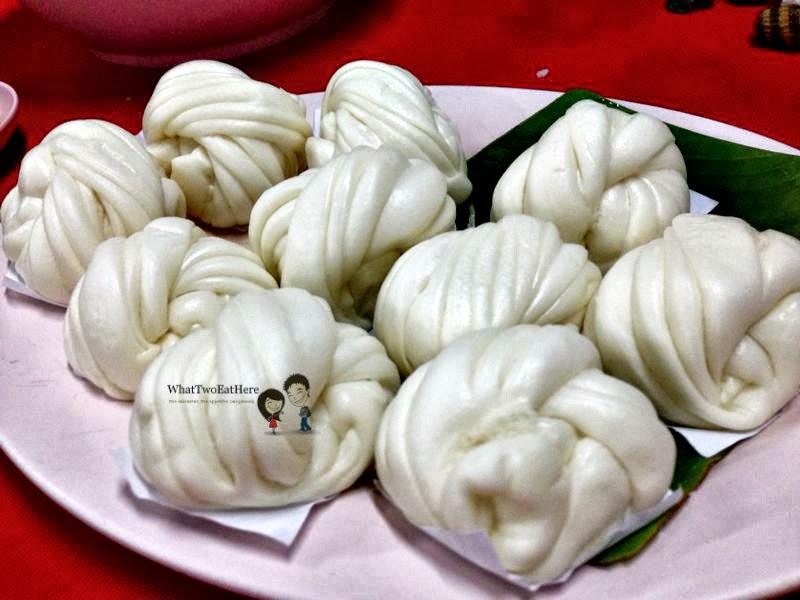 He says: Its a bit hard despite it is freshly steamed.

She says: IT WAS SERVED HOT! SO YAY!

Sharon says: I LOVE MANTOU! There's just no way you can critically evaluate mantou and all the goodness it has blessed us so graciously with. NO WAY. Lol 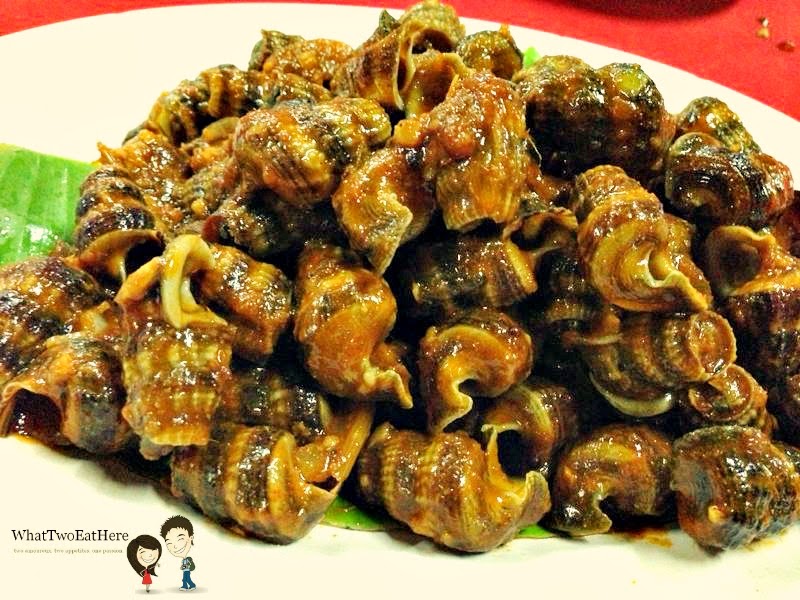 He says: My favourite! Yums.. The sauce was awesome..

She says: Not only this is super yummy with the way they cook it (Kam Heong), but it was so much fun sucking it with our buddies! Love it!

Sharon says: This was something tedious to eat, really! Take my hats off to those who eat these crawlies so quickly. I was lucky I even got one out! The curry base was a little too spicy for my taste, though. 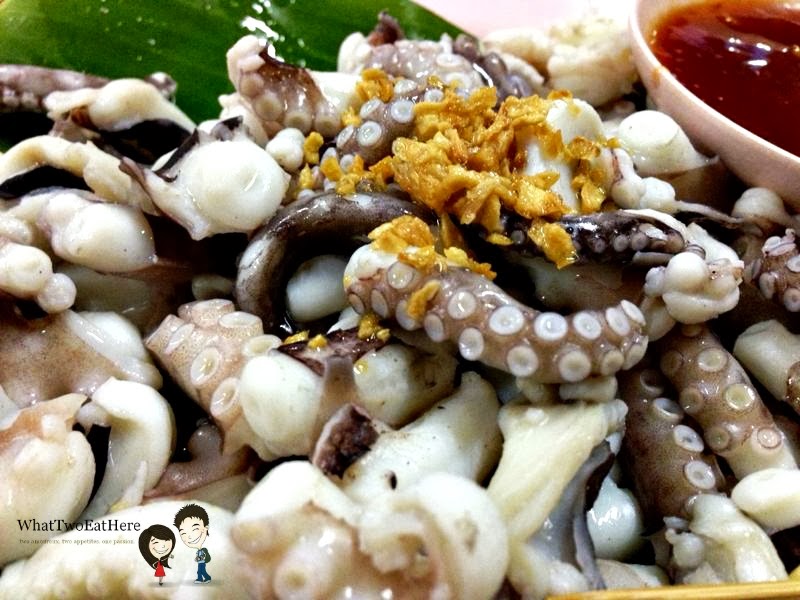 He says: Just okay.. quite fresh though..

She says: Normal, but the fried garlics on top make it very appetizing!

Sharon says: Close to being raw, it was just a flat 'okay' for my taste buds. Nothing to rave about. 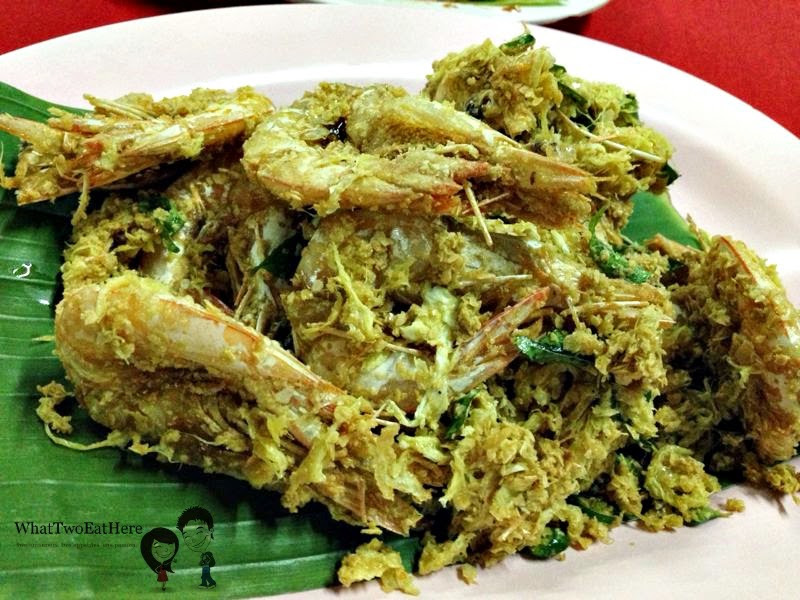 He says: Arggghh.. Gotta peel again. Overall, the nestum was not bad..

Sharon says: I consider prawns to be delicious only when they're ones I don't bother peeling before devouring them. The prawns were definitely reasonable in size. The way it was fried with the nestum could've definitely tasted better. Maybe a little more curry leaves would've done the trick. 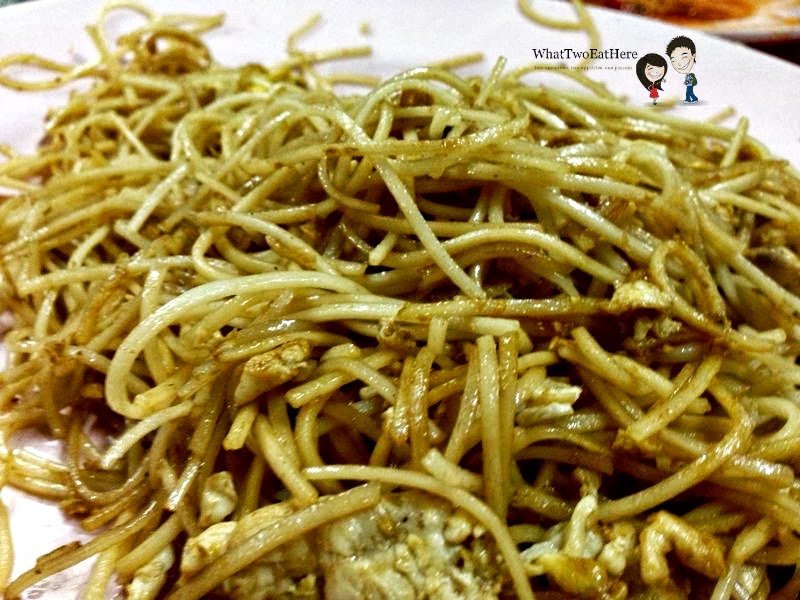 He says: A bit too dry and I could not really taste anything except flour. Teehee.

She says: Okay okay only for me.

Sharon says: There's nothing like pan-tossed noodles with good frying oil and a good combination of egg, leeks, chicken pieces and whatnot. Fried to perfection, those noodles weren't the slightest bit tough and weren't drowned in oil unlike many we've all possbily come across with. 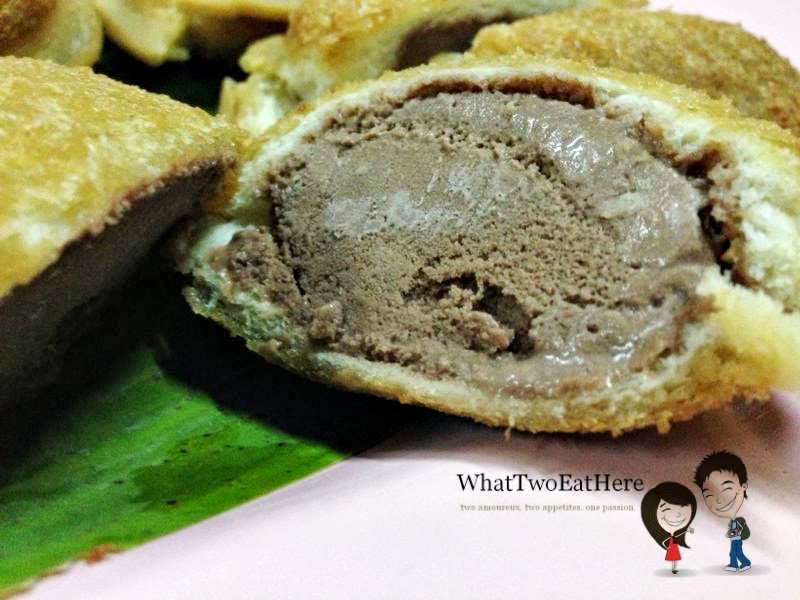 He says: Thumbs up!

She says: BEST DESSERT EVER after seafood feast. *sings* You're hot then you're cold..

Sharon says: Probably the most ideal way to end any dinner: something sweet; something savoury. Some genius must've thought "Why not both?" and invented such a sweet and salty concoction. Here you've got the best of both worlds: chocolate ice cream and fried bread. No one should ever have to complain again. 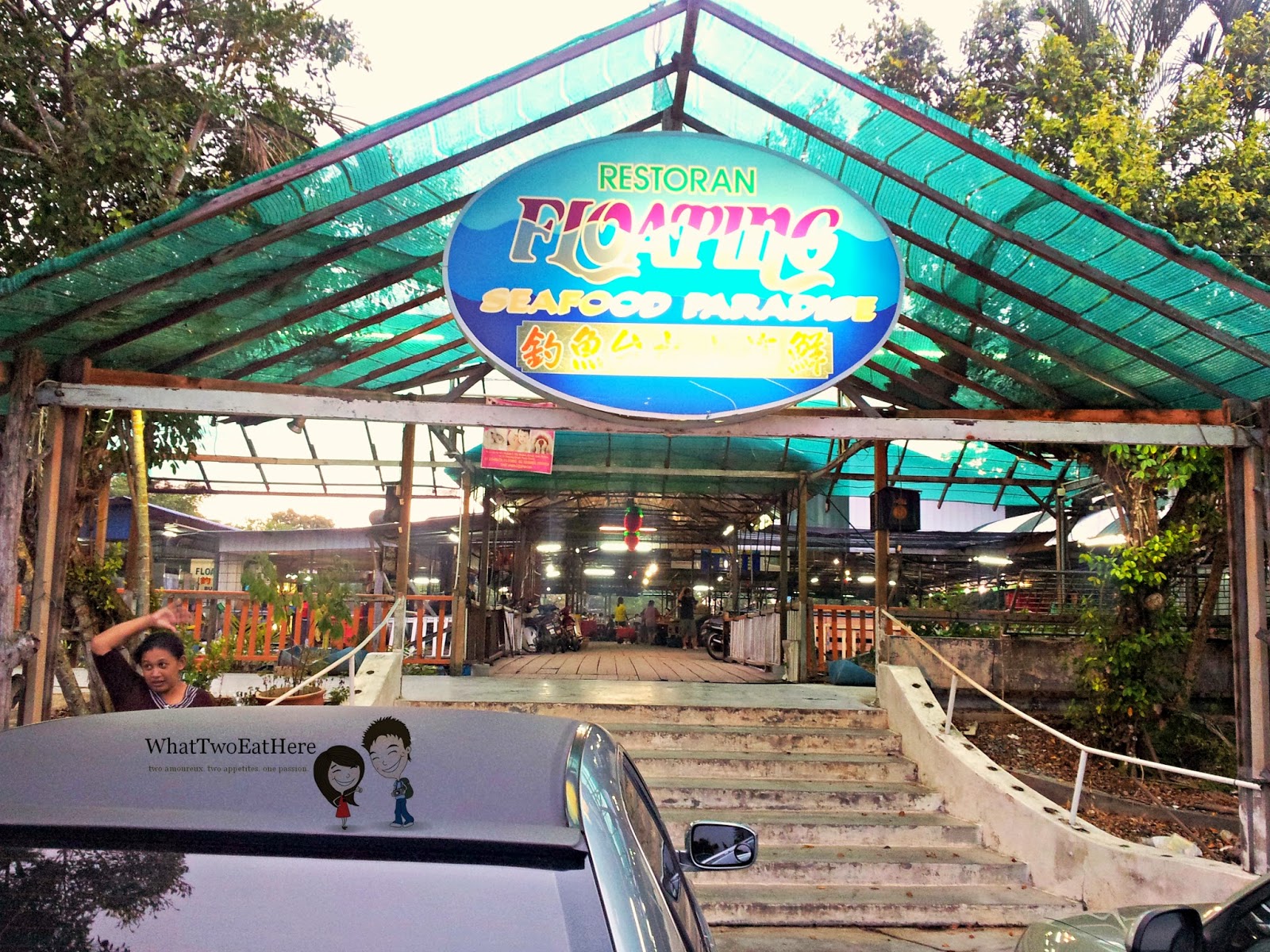 Ratings:
His rating: 8.5/10
Her rating: 8/10
Sharon's rating: 6.5/10
Posted by WhatTwoEatHere at 3:49 pm
Email ThisBlogThis!Share to TwitterShare to FacebookShare to Pinterest