We are back! And this time we are back with our special guests. NINE of them :)

SPECIAL EDITION post coming up right now! So, this is gonna be a lengthy post for sure!

So, on Labor Day, a group of us decided to go makan at Pulau Aman, a small island off the coast of Bukit Tambun, Penang.  The seafood at Pulau Aman is famous for its freshness and price. People always tell us that this is one of the MUST GO places in Penang because it's really cheap and nice and fresh and all that. So, what better day to go than on a public holiday, right?

WRONG! There were so many people! Let's not go there yet. We will start off with how to get to this island first.

You've gotta drive towards Tambun and you'll find the Pulau Aman signboard. OR you can always type "Batu Musang Jetty" in Waze like what we did. Hah. We went in three separate cars. We left Penang at around 11am and reached the jetty at about 1145am. Quite a short journey.

This is how the jetty looks like. Kompleks Jeti Batu Musang. 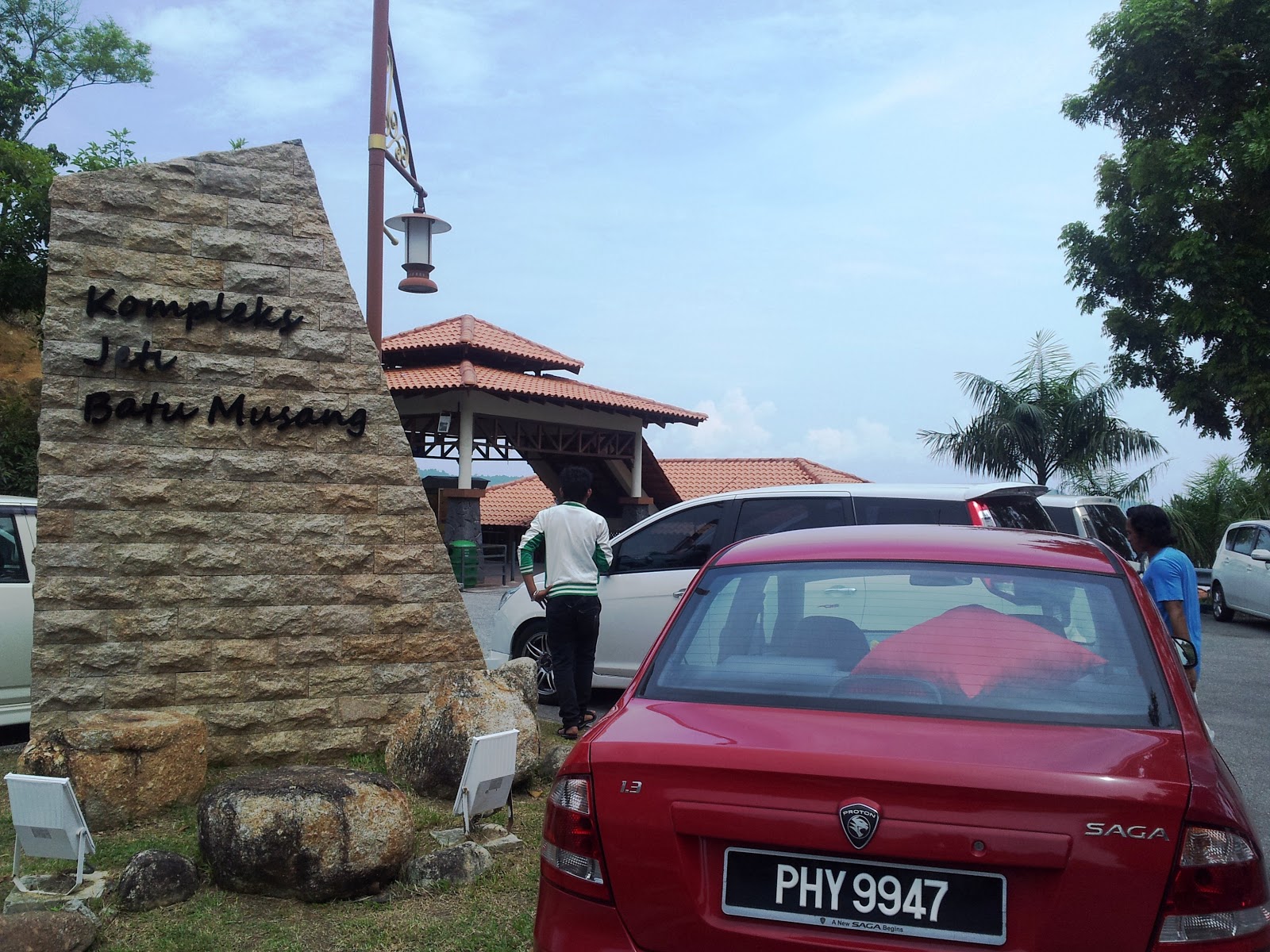 Walk till the end of the jetty to purchase your tickets. Two ways is RM6. Funny place to sell tickets hah. 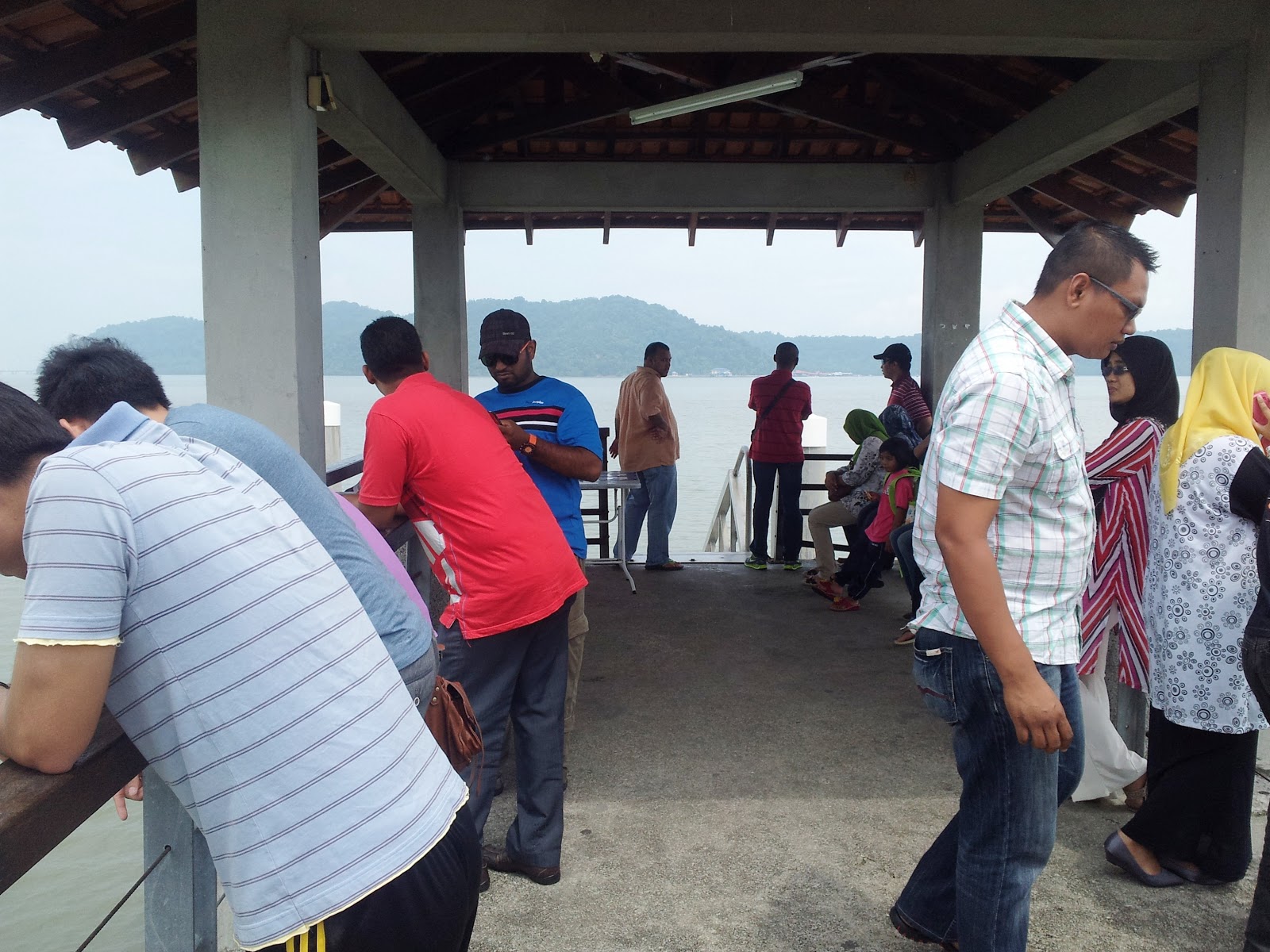 Just a very short (10-15 minutes) journey from the jetty to the island. 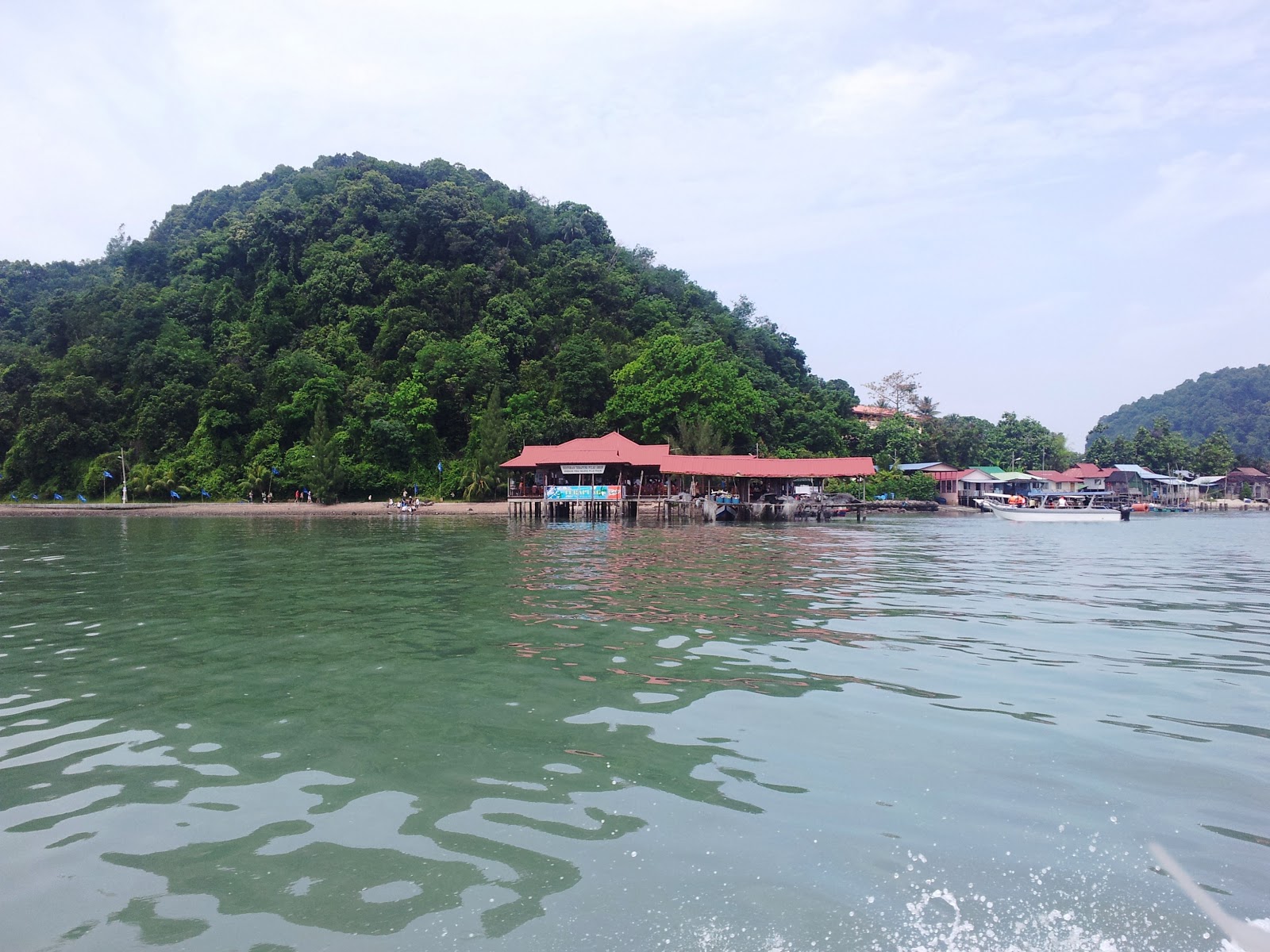 Once you're on the island, you'll notice villages everywhere and a small school. 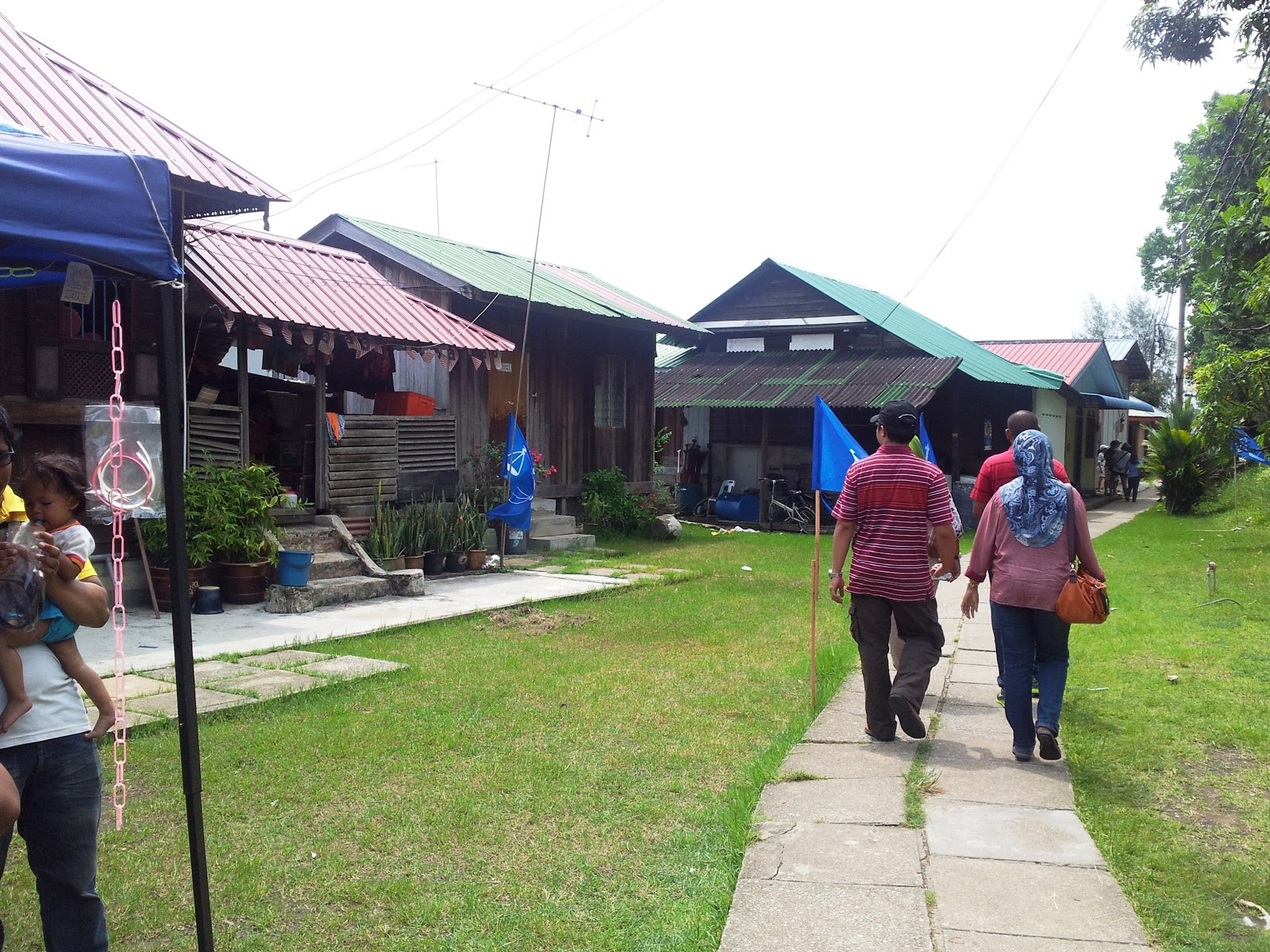 Then, you'll see the "floating restaurant" 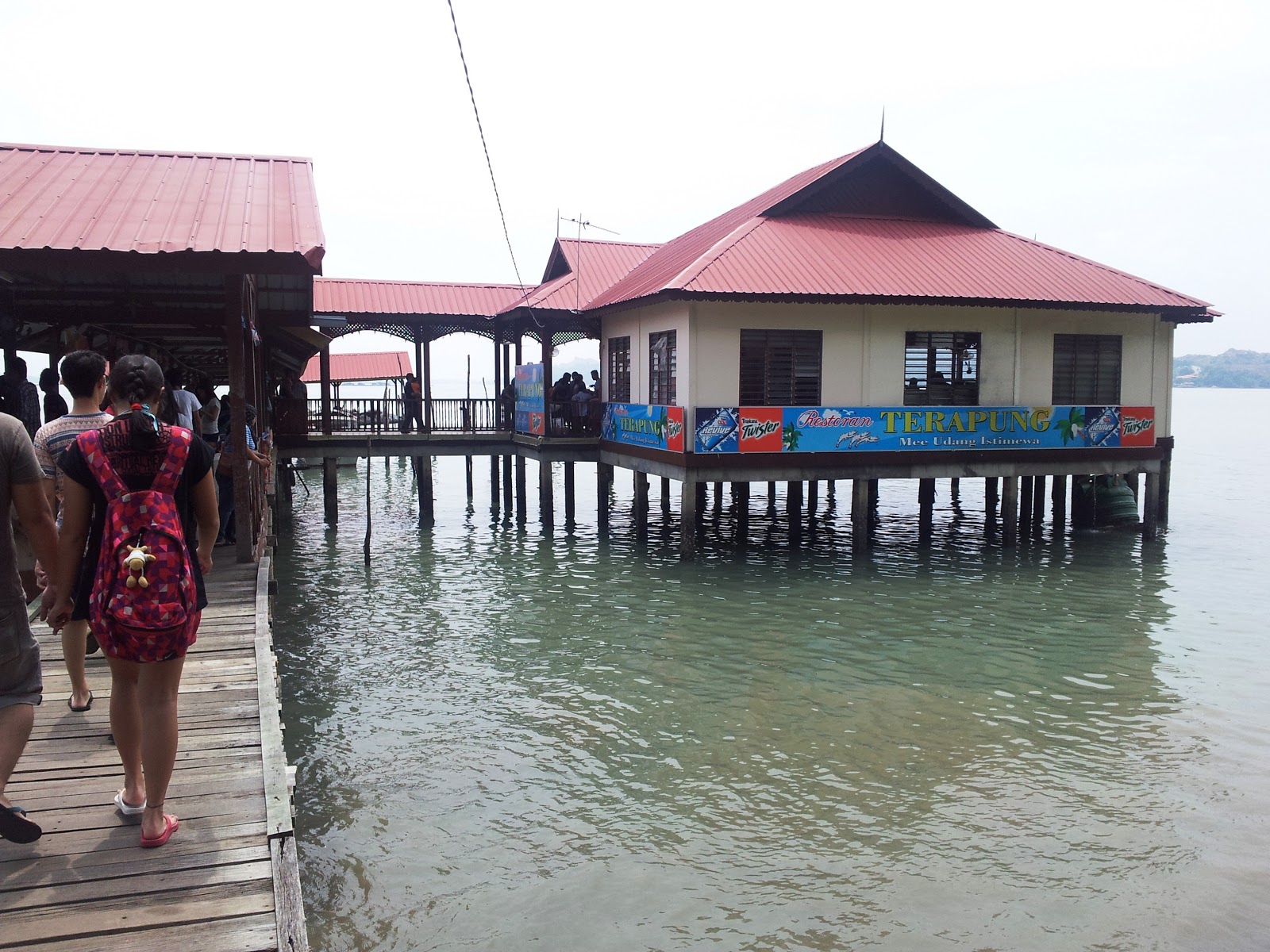 So, this is how it goes. First, you'll need to BUY the fresh seafood here (at the entrance part of the mini bridge) and then bring them into the restaurant for them to cook for you. Yes, that's a lot of people lining up to get their hands on those freshies! 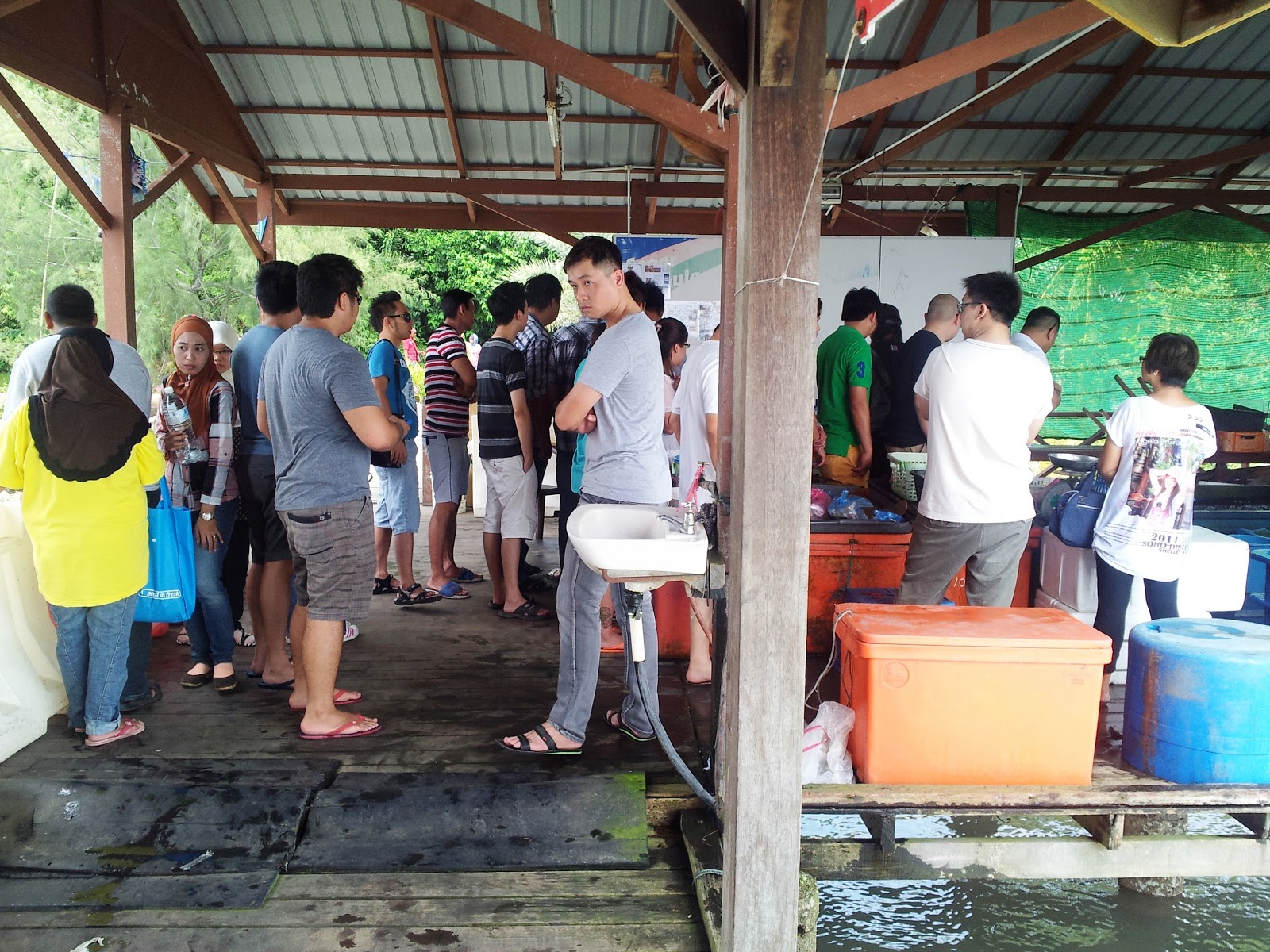 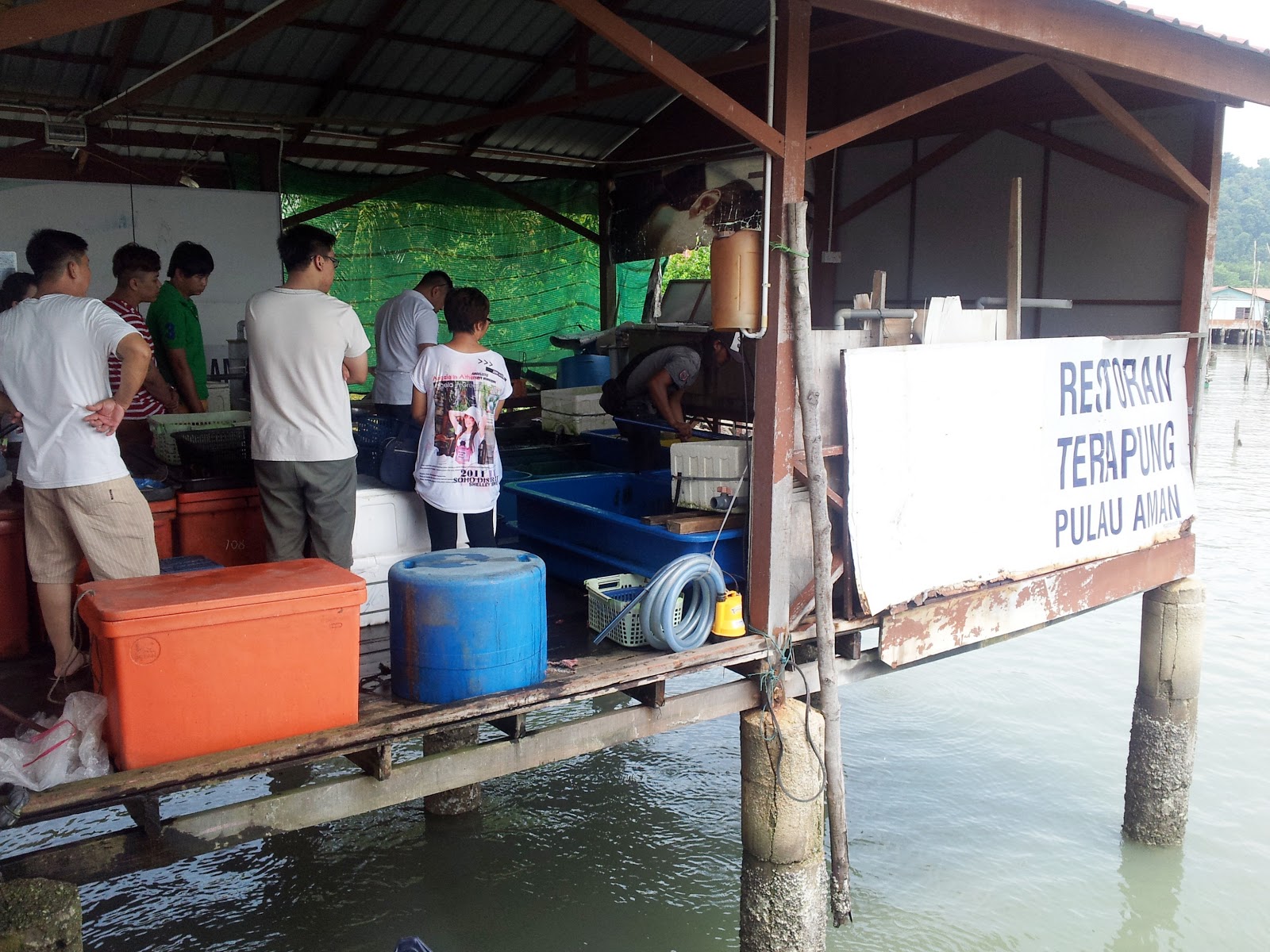 When it was our turn, there were nothing left so we had to wait for the next boat to come. 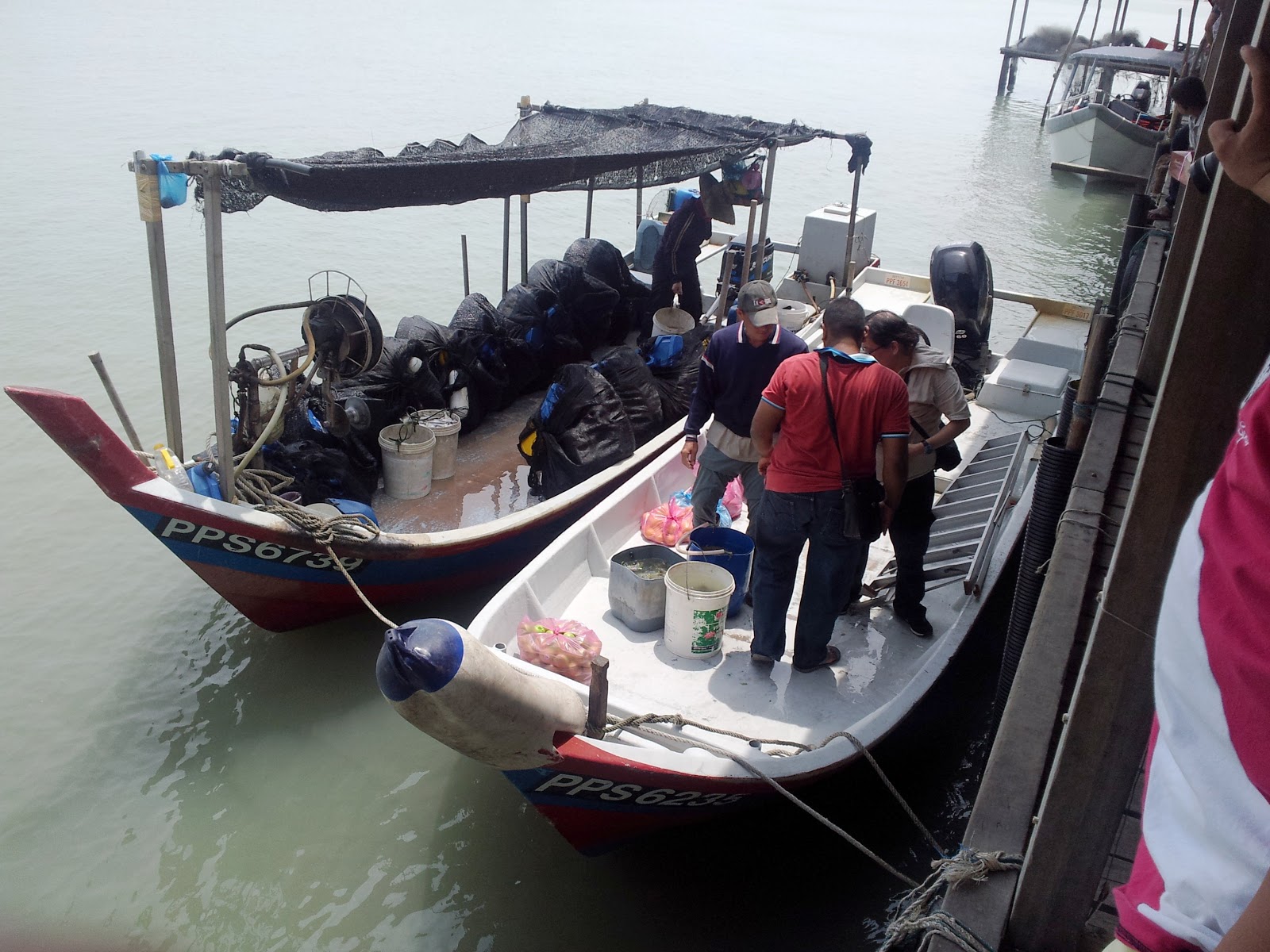 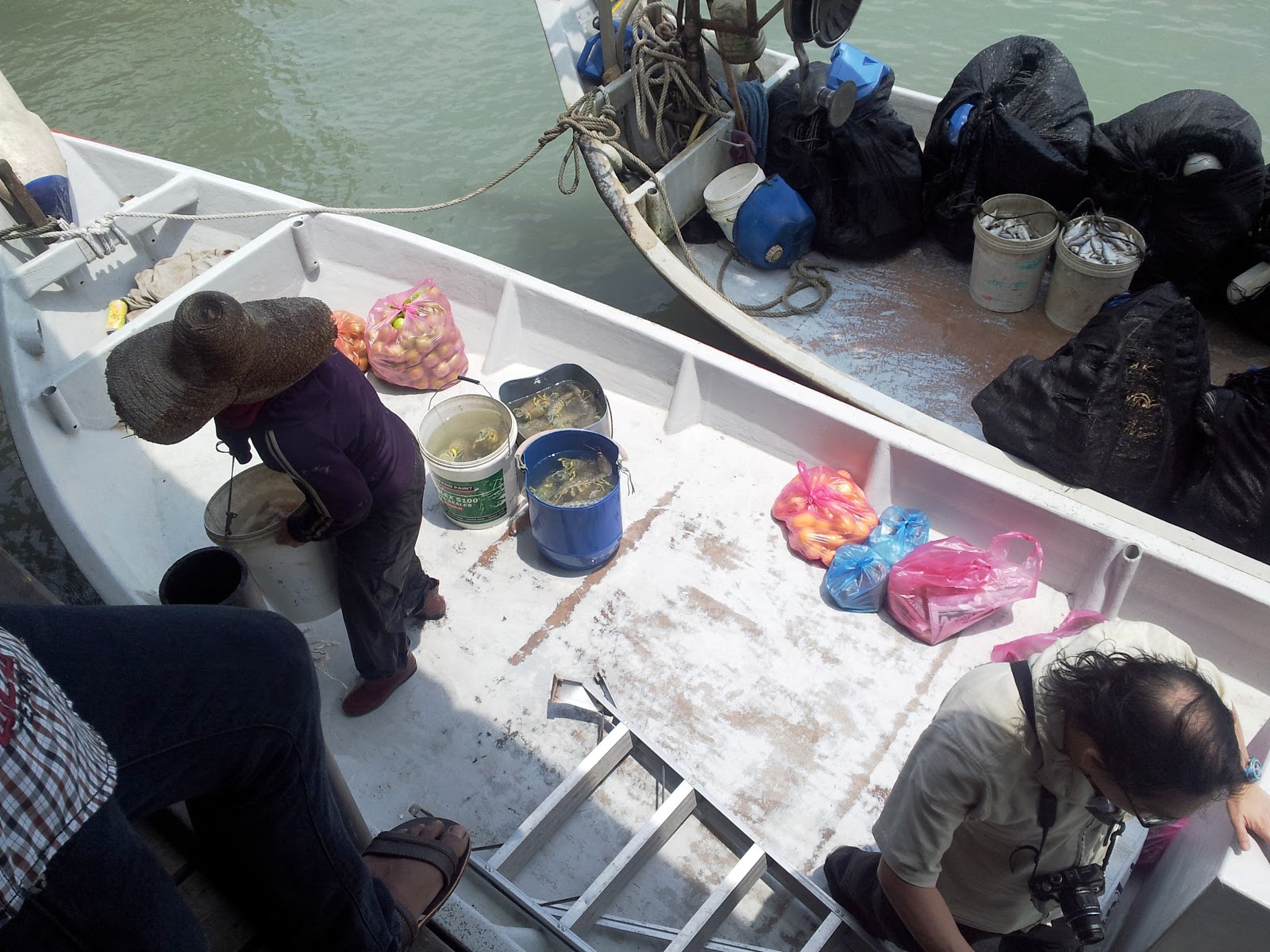 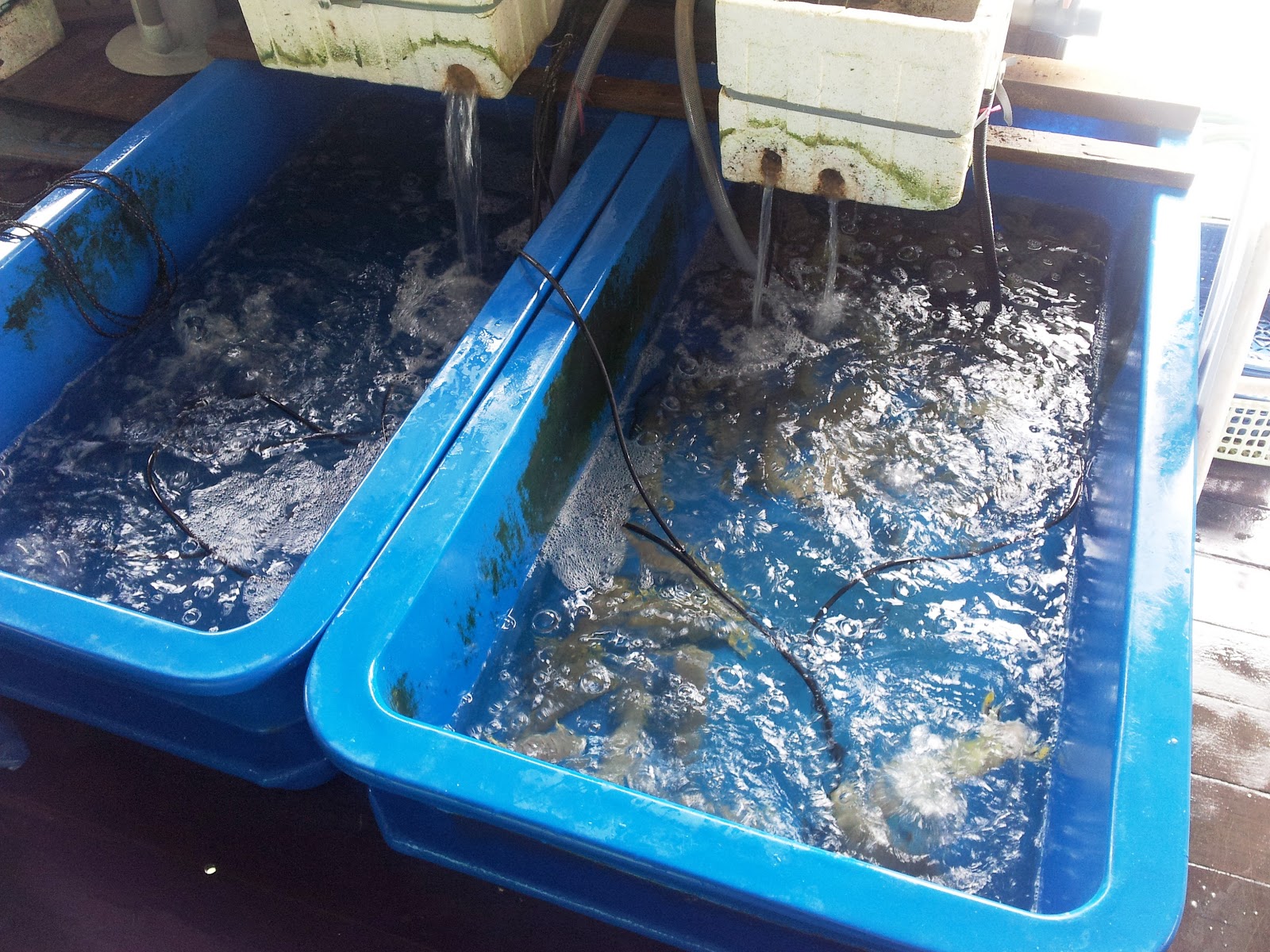 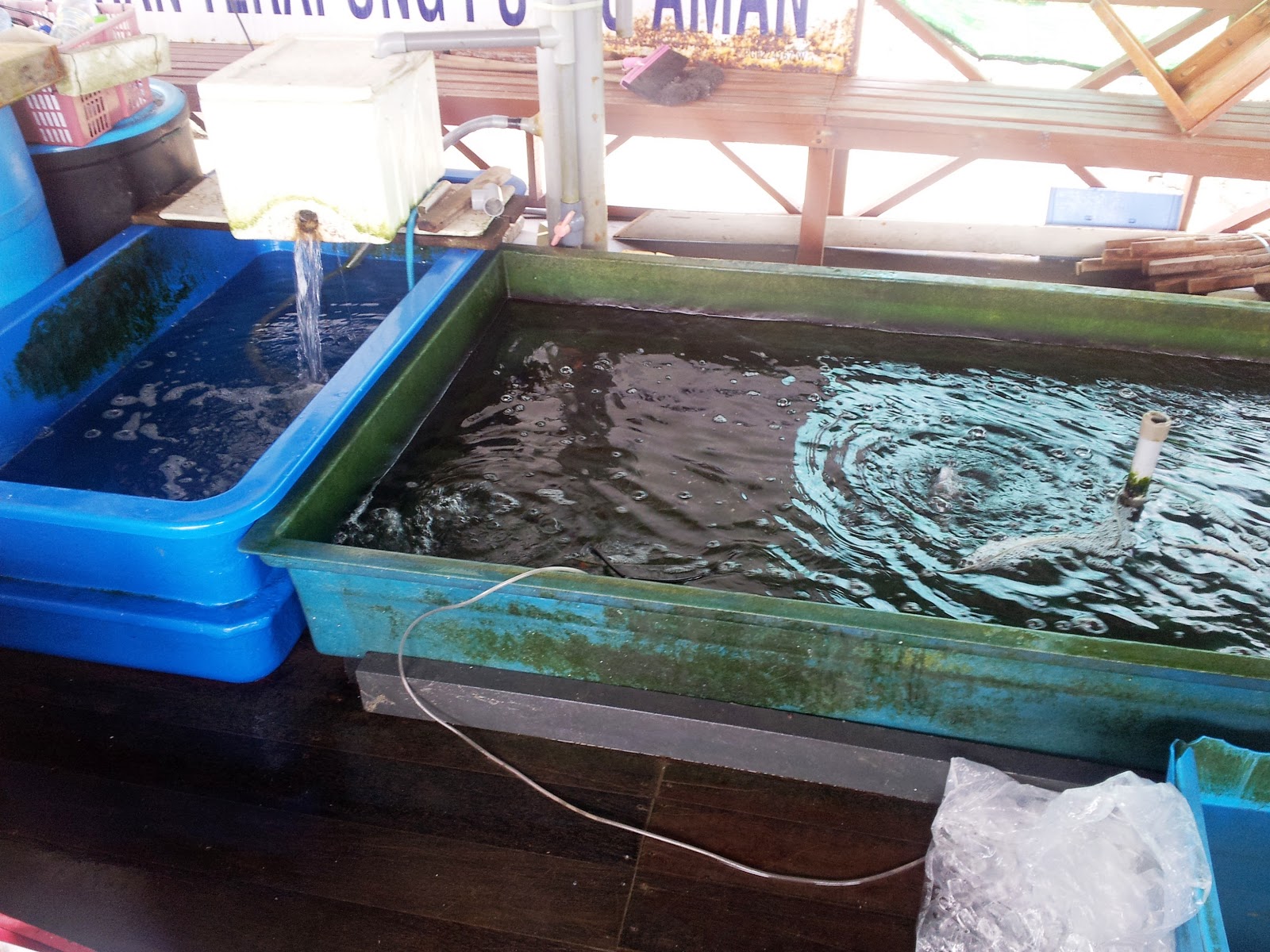 We obviously took the normal ones. And since there were nothing left, we bought 5kg of prawn mantis. Haha. Crazy huh. 5kg for 10 people! 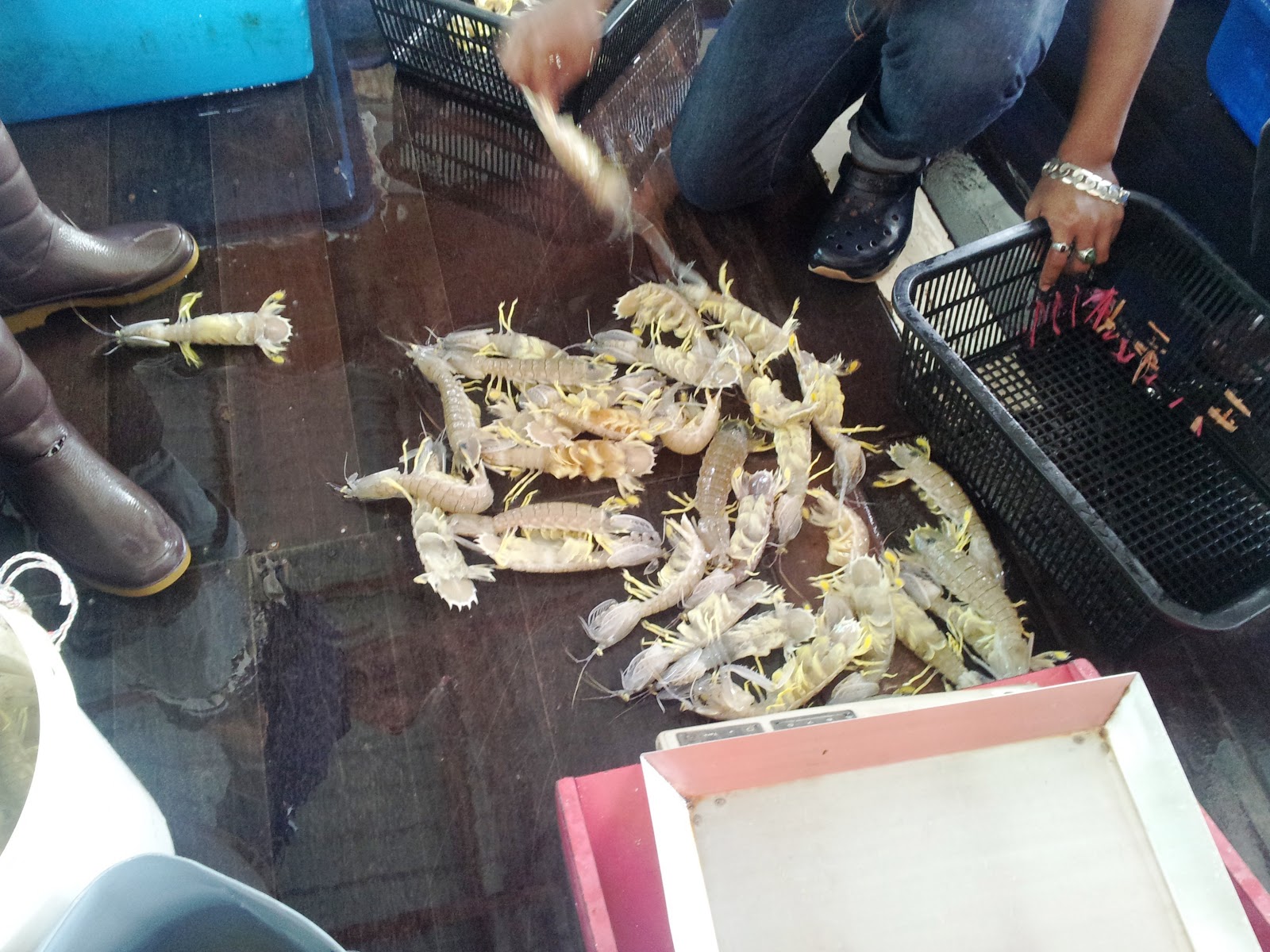 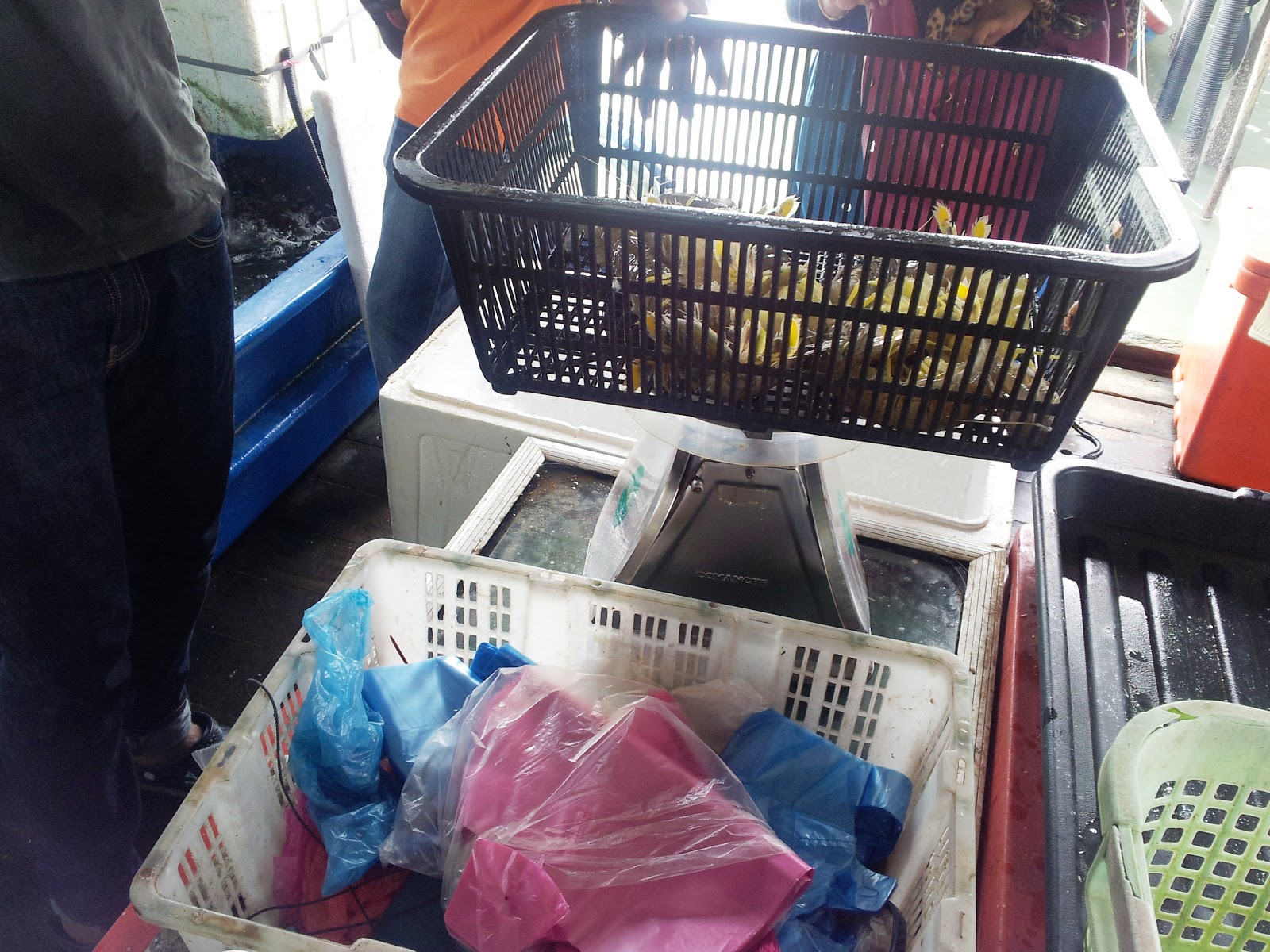 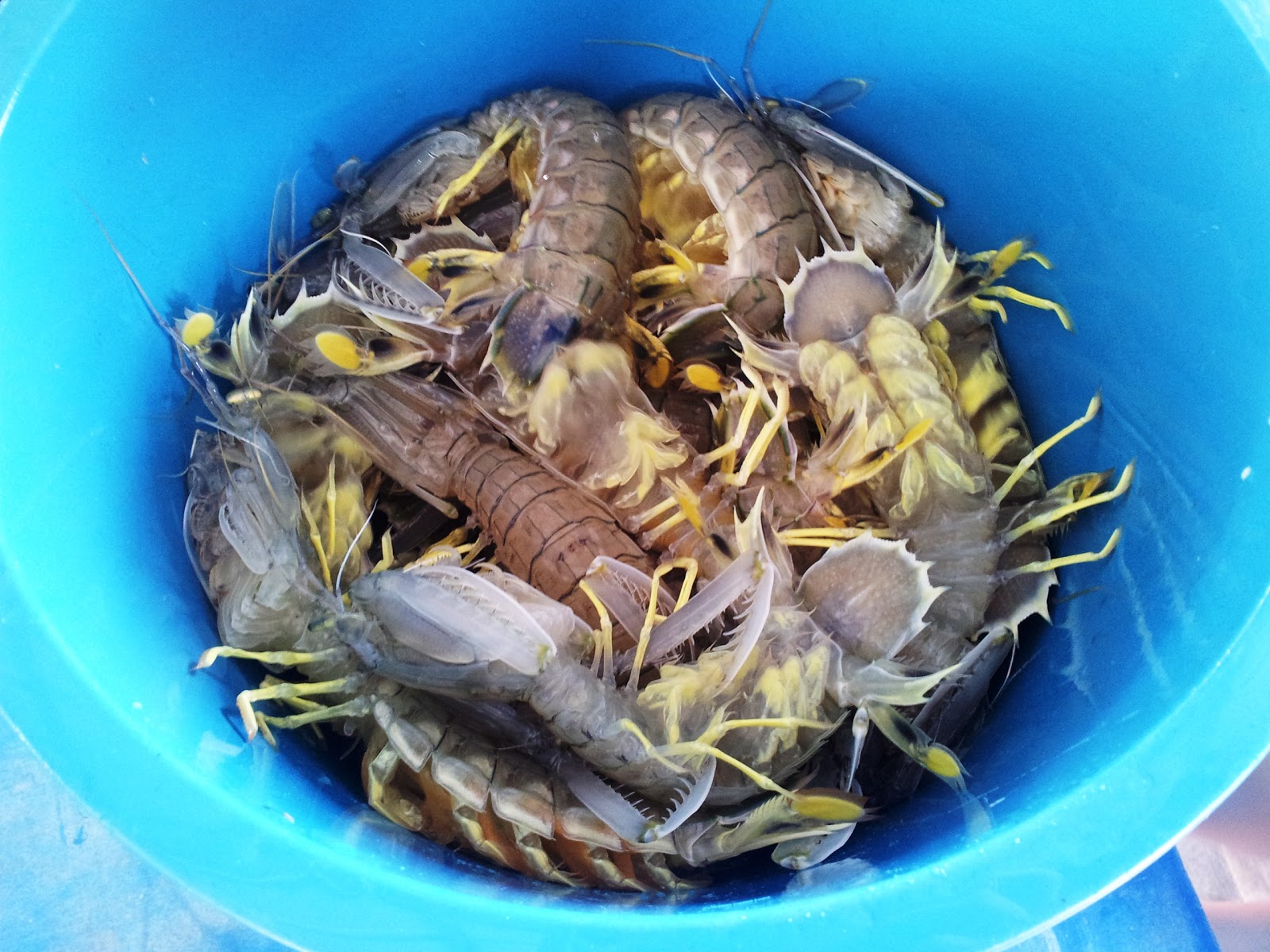 Welcome to the floating restaurant at Pulau Aman. 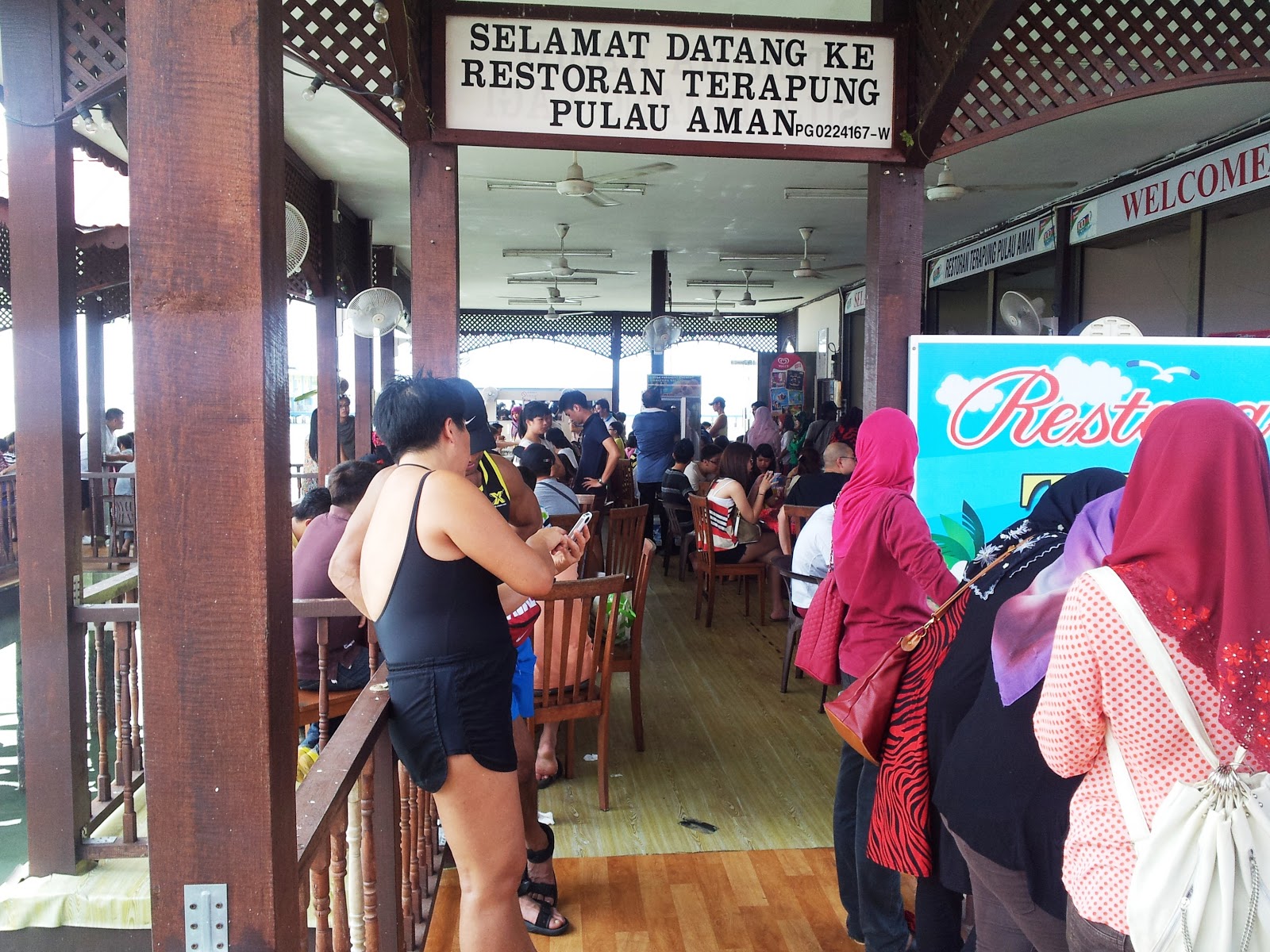 It must be really good seeing that people are waiting for tables. It's either that or they have very limited tables. We worked as a team. Half went to wait for tables and another half went to select the seafood. 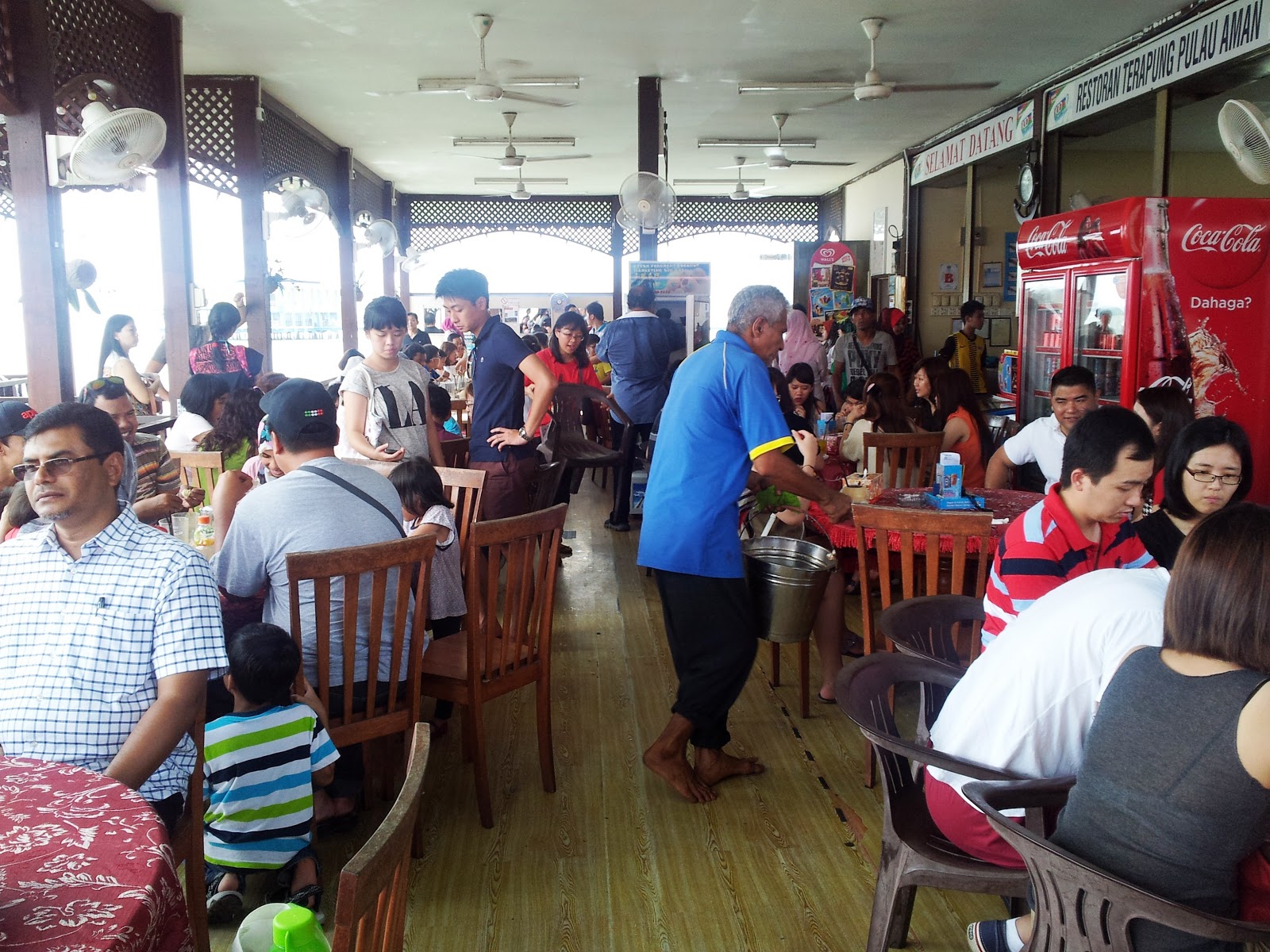 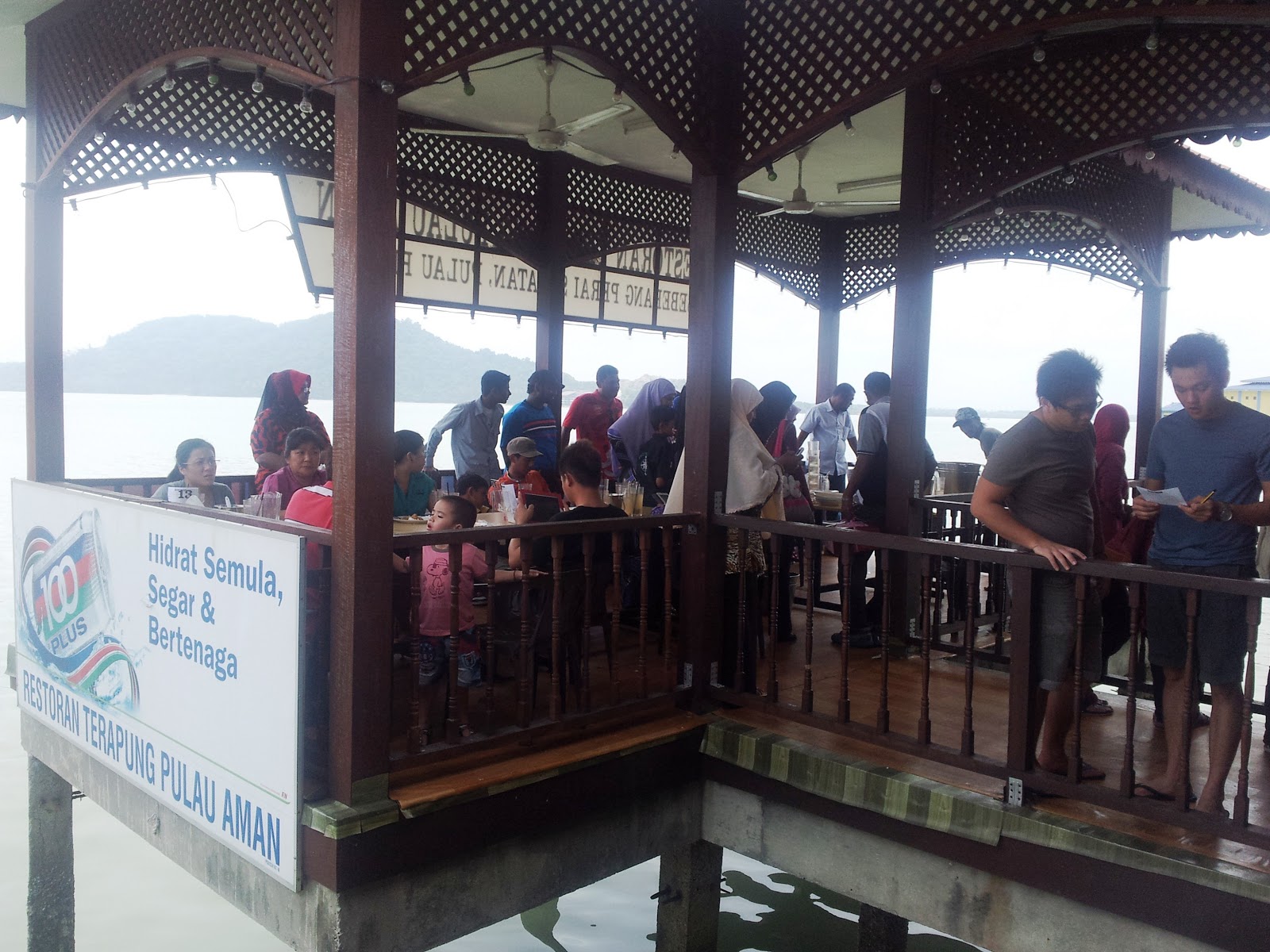 You must be wondering if that's all that we're gonna eat.

Nope. The seafood is like the main course and the side dishes (which are carbs) are fried rice and mee udangs. They have mee goreng udang as well. Everything the restaurant serves comes with prawns. So, we all ordered mee udangs and our main course was the prawn mantis! 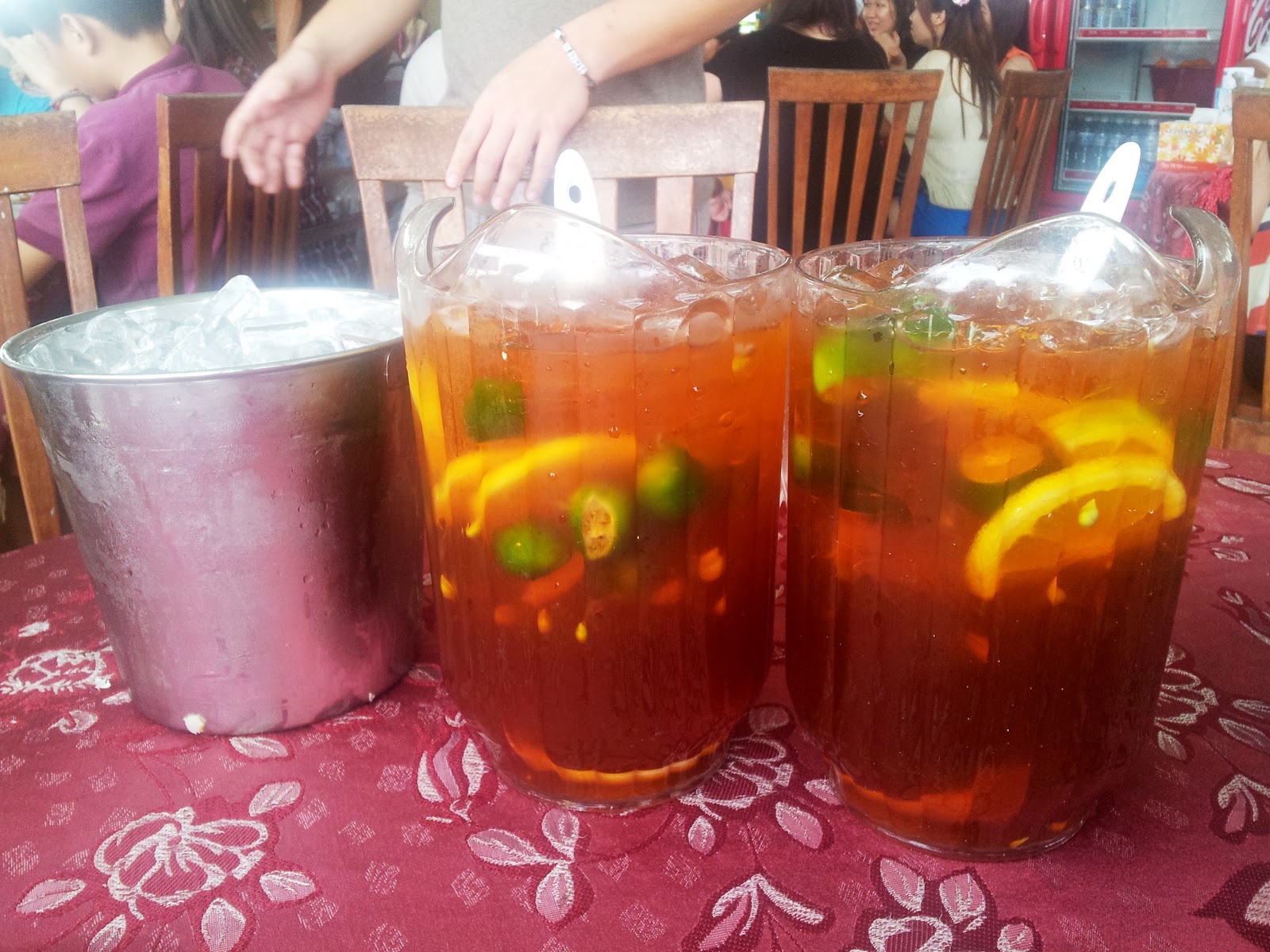 He says: I like this ILT! But there's traces of colouring in there.

She says: Not too bad. BUT THE COLORING HOW!?! Sorry, minus points for me in that. Thumbs down.

Andrew says: We were all too thirsty, and it was there to quench our thirst, but it was a good mix compared to the normal mamaks.

Beverly says: Thirsty? Absolutely refreshing to the max! :) just perfect. Wasn't too sweet, nor was it diluted.

Vanessa says: Very nice! maybe because I was too thirsty so it tasted superbly good.

Eulene says: The drink was quite refreshing. It's always nice when the sun is blazing hot.

Ben says: The tea was mixed perfectly with the lemon and lime. Great refreshing taste.

Nicholas says: Just nice. Not too sweet, not too sour.

Justin says: Definitely better than mamak's or other malay joints. 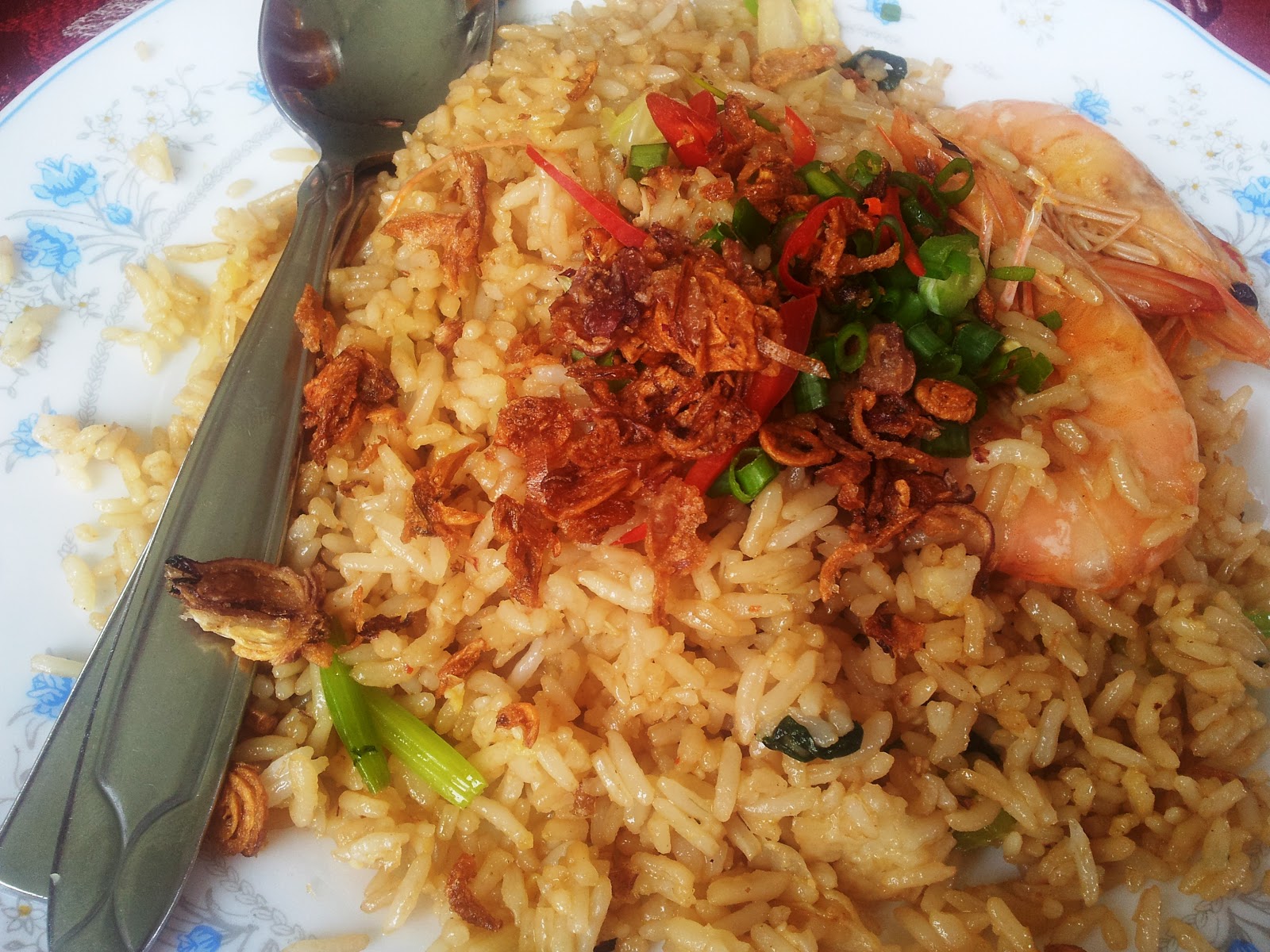 He says: Not so good. The rice is like super big and there is not enough taste to it.

She says: To me, it tasted more like salt and pepper fried rice. He can cook a better fried rice than this.

Andrew says: I actually like this better than the mee udang whch I think was supposed to be famous at Pulau Aman. The way its fried that every mouth is burst with a very fragrant flavor.

Beverly says: I thought it was ok-ok? Nothing fancy about it :) but still good.

Vanessa says: Just like any typical fried rice to me. All the fried rice taste the same to me. Teehee.

Eulene says: I'd give this 5/10. It isn't the typical chinese or malay fried rice. Something different about this rice is the curry powder taste in it :)

Leroy says: Not bad. Better than any fried rice I could cook at the moment.

Ben says: I think the fried rice is pretty flavorful. The huge prawns are an added plus.

Nicholas says: Not bad but it wasn't really that special to me. Just another typical fried rice.

Justin says: The vegetables were pretty nicely fried. I'll definitely order this if it was in our local mamak store.

Joshua says: It's nice partly because I was hungry, but no biggie about it. 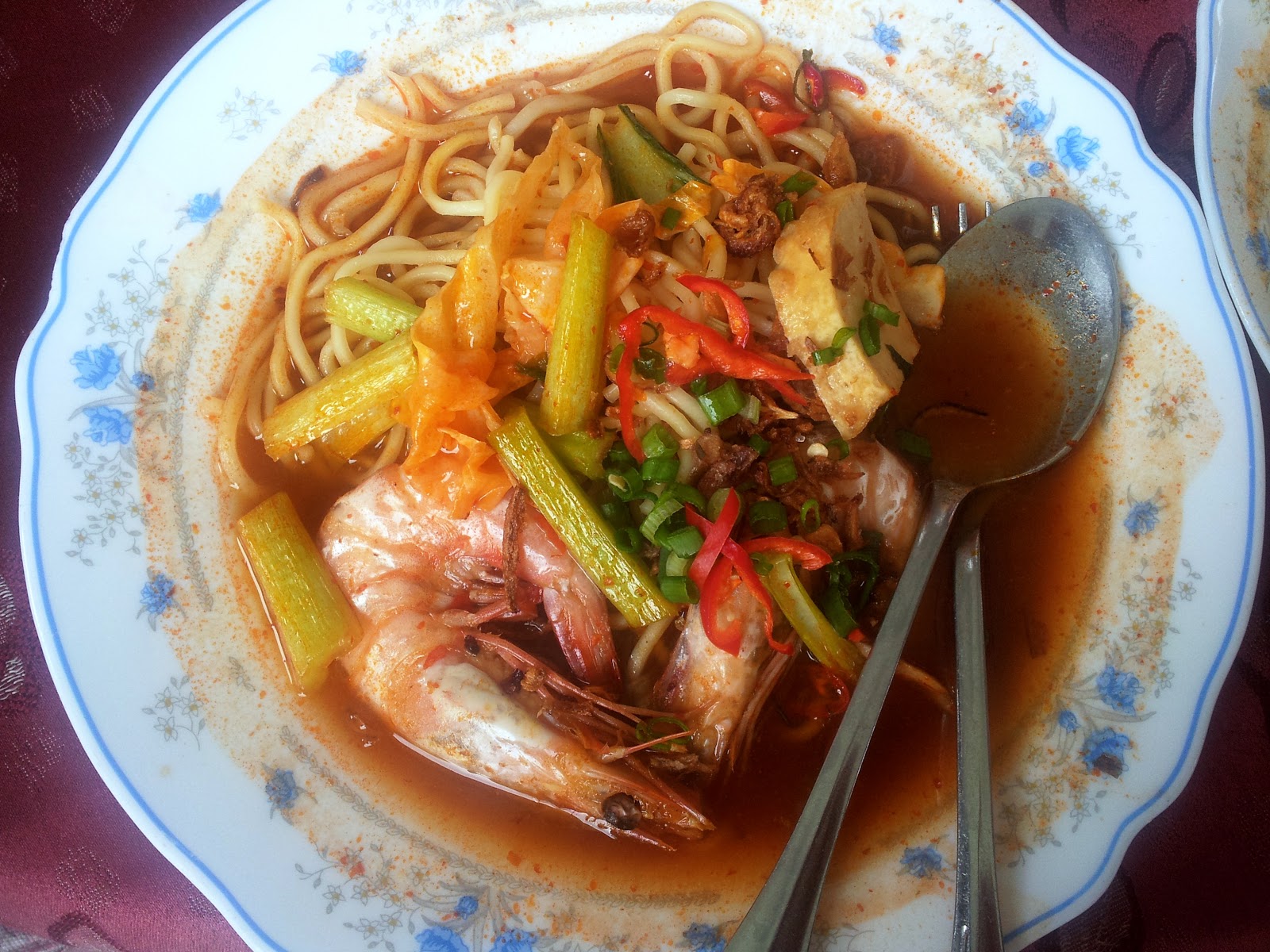 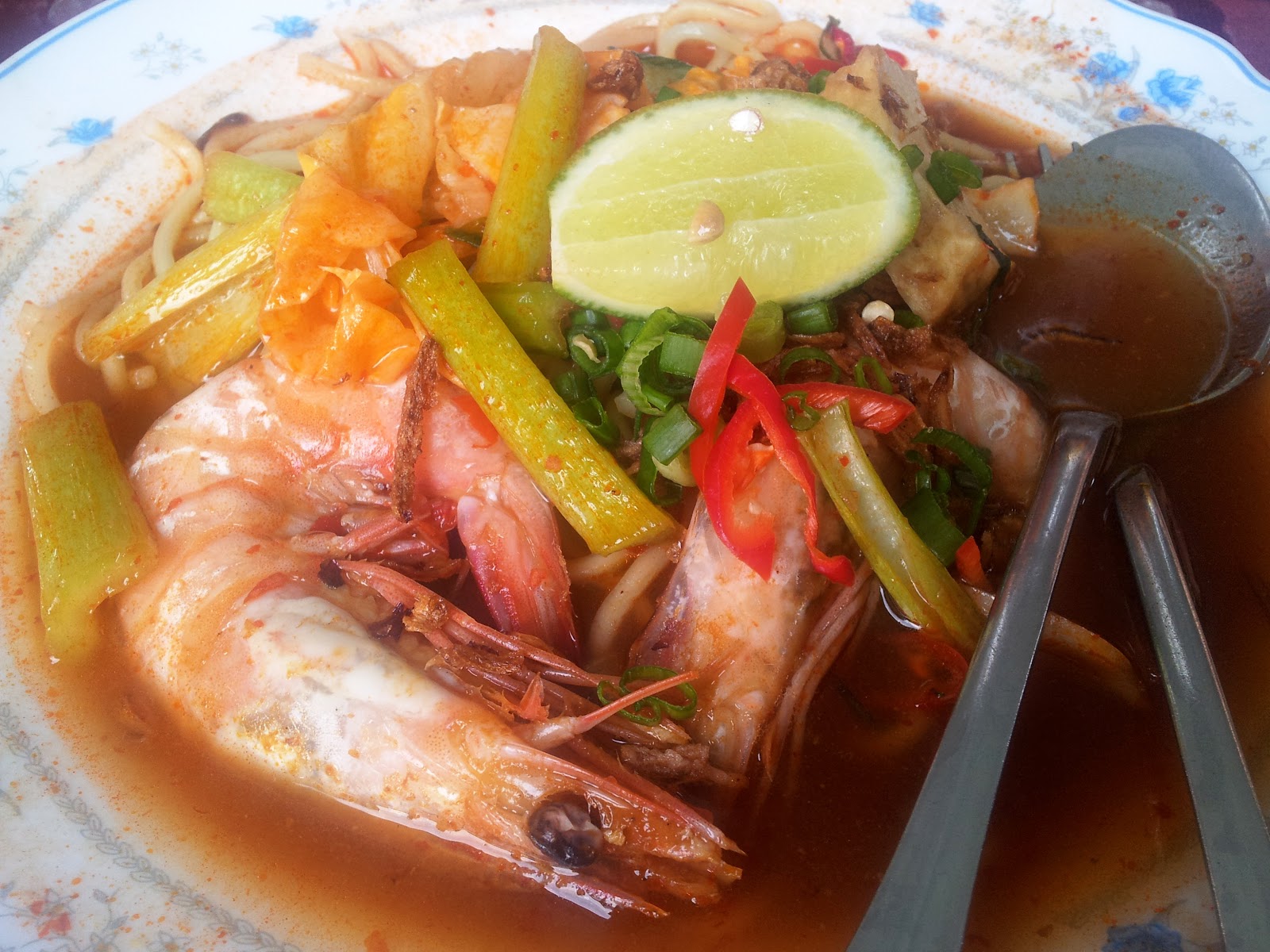 He says: Mee Udang. The legendary mee udang!?!?! No. Doesn't taste good at all for me. "Maybe its a public holiday, thats why."

She says: This one is worse than the fried rice. The "kuah" is like soup. SO DILUTED. Not spicy. No prawn flavour whatsoever. Praws are fresh however. It's just a huge dissappointment seeing that everyone talks about its mee udang! BIG NO FOR ME.

Andrew says: It's just okay for me. I had better ones in Penang.

Beverly says: Wasn't really a fan of it, but the prawns were awesome :)

Vanessa says: It was okay, not the best tho. Definitely tried better ones.

Eulene says: Mee udang was not bad, the gravy was quite good. Could have been better if it was a lil more spicy.

Leroy says: Not too bad.

Ben says: I like the soup with the blend of spices and the sweetness of the prawns.

Nicholas says: It was good. But the portion was abit small for me. Well, everything is small for me :) Haha.

Justin says: This tasted like a mee soup/bihun soup which I always eat. Pretty good. Prawns weren't 100% fresh though. 90%-95% maybe?

Joshua says: It was alright though the noodle is not properly steamed or cooked so there's a weird taste. 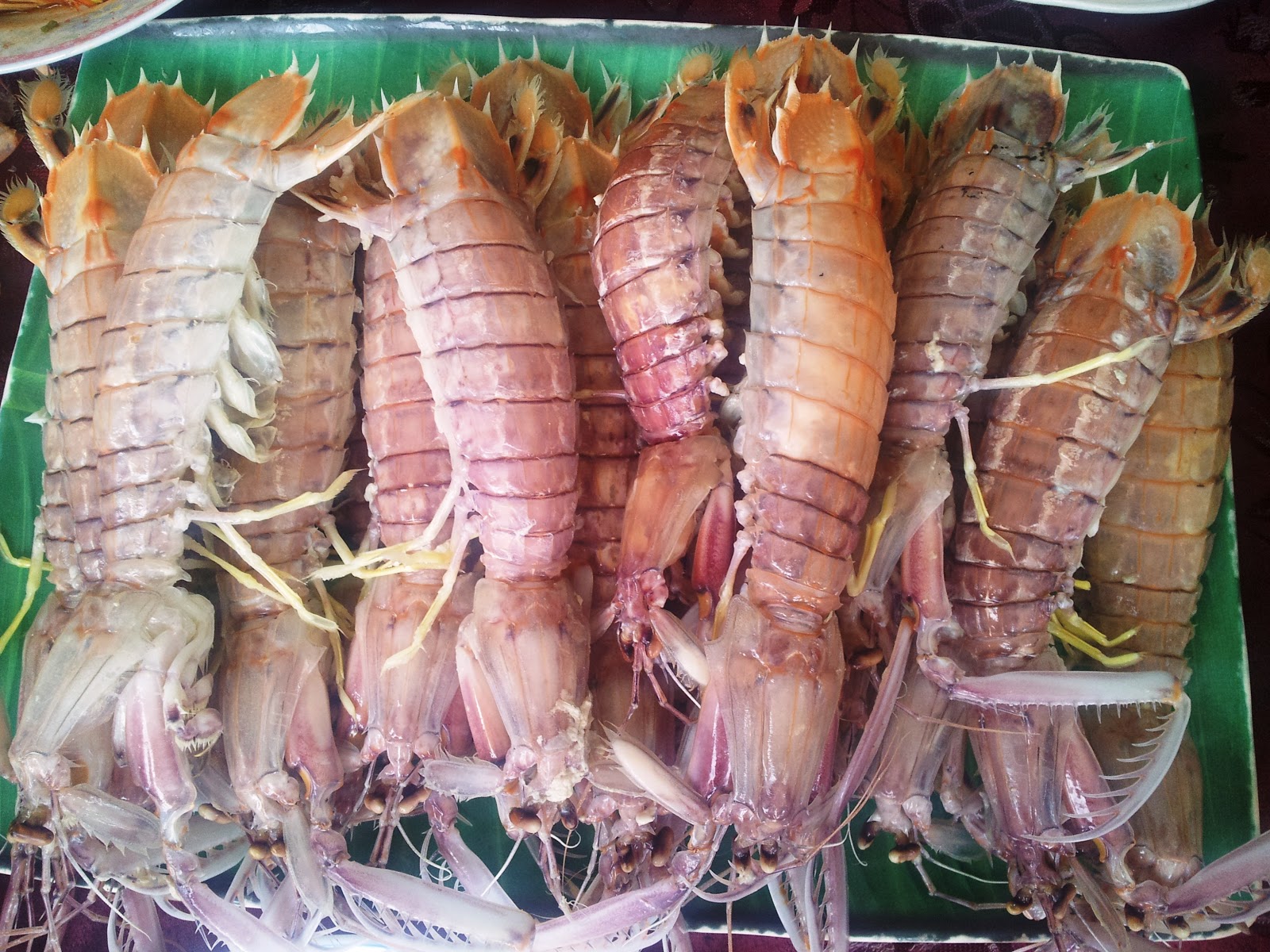 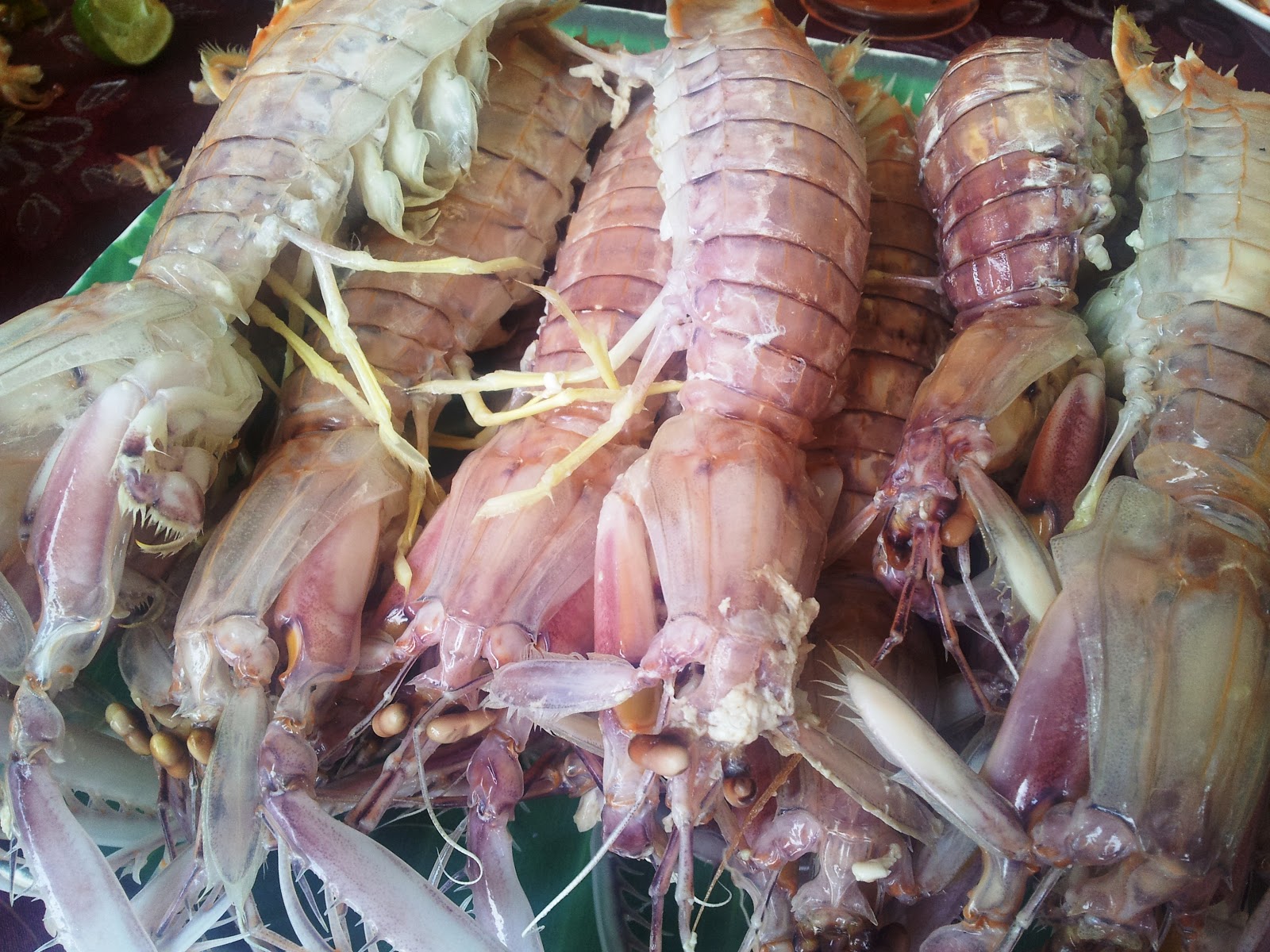 He says: Its my first time eating this. And I love it! Fresh and sweet inside.

She says: LOVE THIS ONE TO THE CORE. Such natural sweetness as you bite on those meat. We had fun peeling/cut the prawns. I love sucking on the juice as you peel it open. Very sweet and fresh!

Andrew says: Totally not a fan of seafood but this really taste good, even the slimy ones.

Beverly says: Totally worth it. Sweet naturally and so fresh! :)

Vanessa says: It's pretty good. Glad that I tried this one for the first time. Fun thing was definitely peeling the shells. Challenging but painful. Lol.

Ben says: It is extremely fresh. The way it is cooked sllow us to taste it naturally. The meat is succulent and sweet.

Justin says: It was about RM6 for 1. Completely fresh. Just steamed only so it had the natural sweetness.

Joshua says: It was okay at first, but got the "jilak" feeling after the 3rd one. 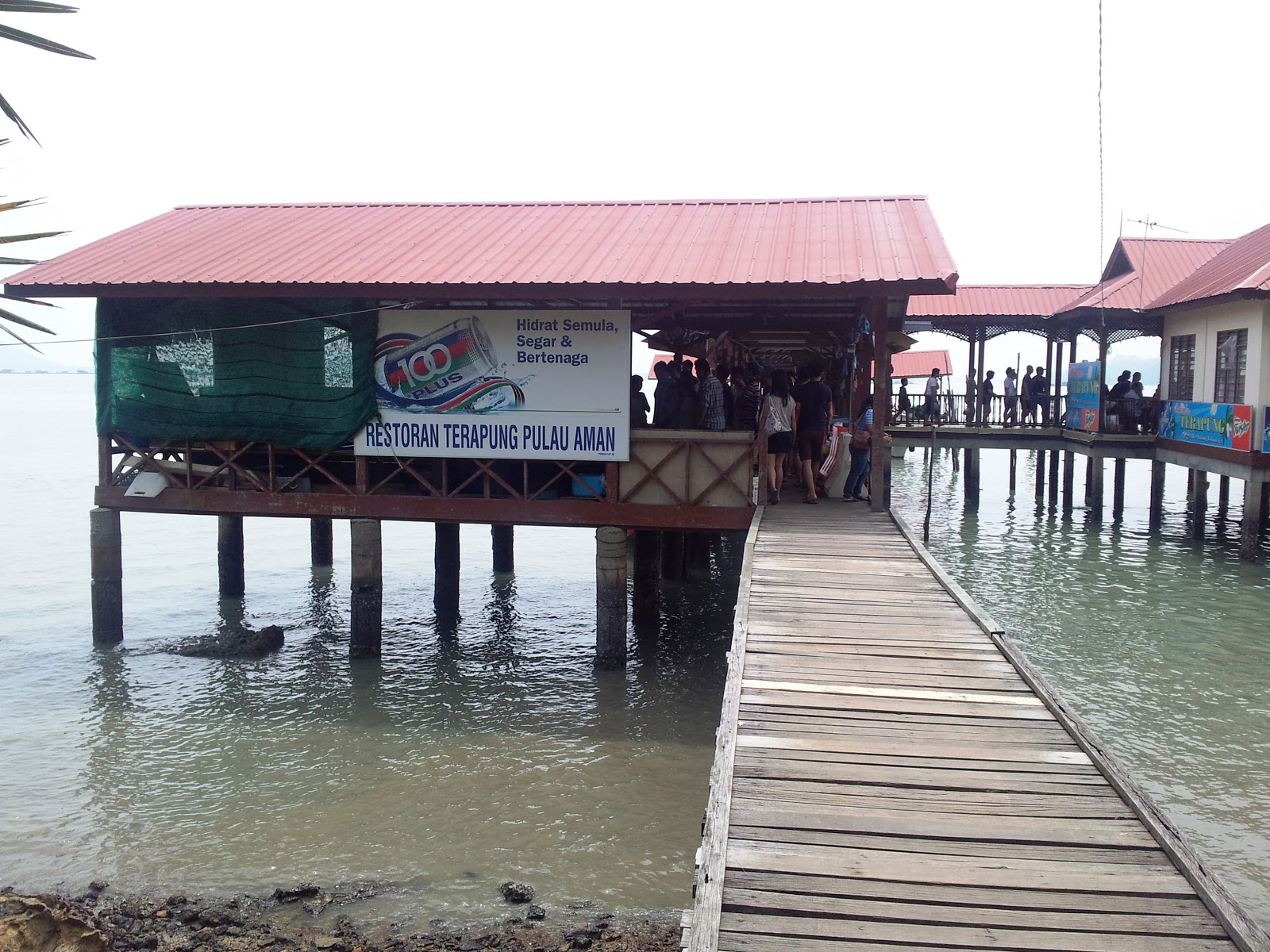 From left: Andrew, Beverly, Vanessa, He, She, Eulene, Leroy, Ben, Nicholas, Justin and Joshua.
Posted by WhatTwoEatHere at 11:49 am
Email ThisBlogThis!Share to TwitterShare to FacebookShare to Pinterest