The actual plan for dinner was at The Sire with his family for a nice evening together, until we saw this majestic entrance of the new restaurant just few doors away. We walked in, and the place kinda blew us away. We decided to give it a try :) let's see how it goes. Also, we have two special guests that'll be commenting too! :) (please don't mind our photo quality.. all taken with smartphones) 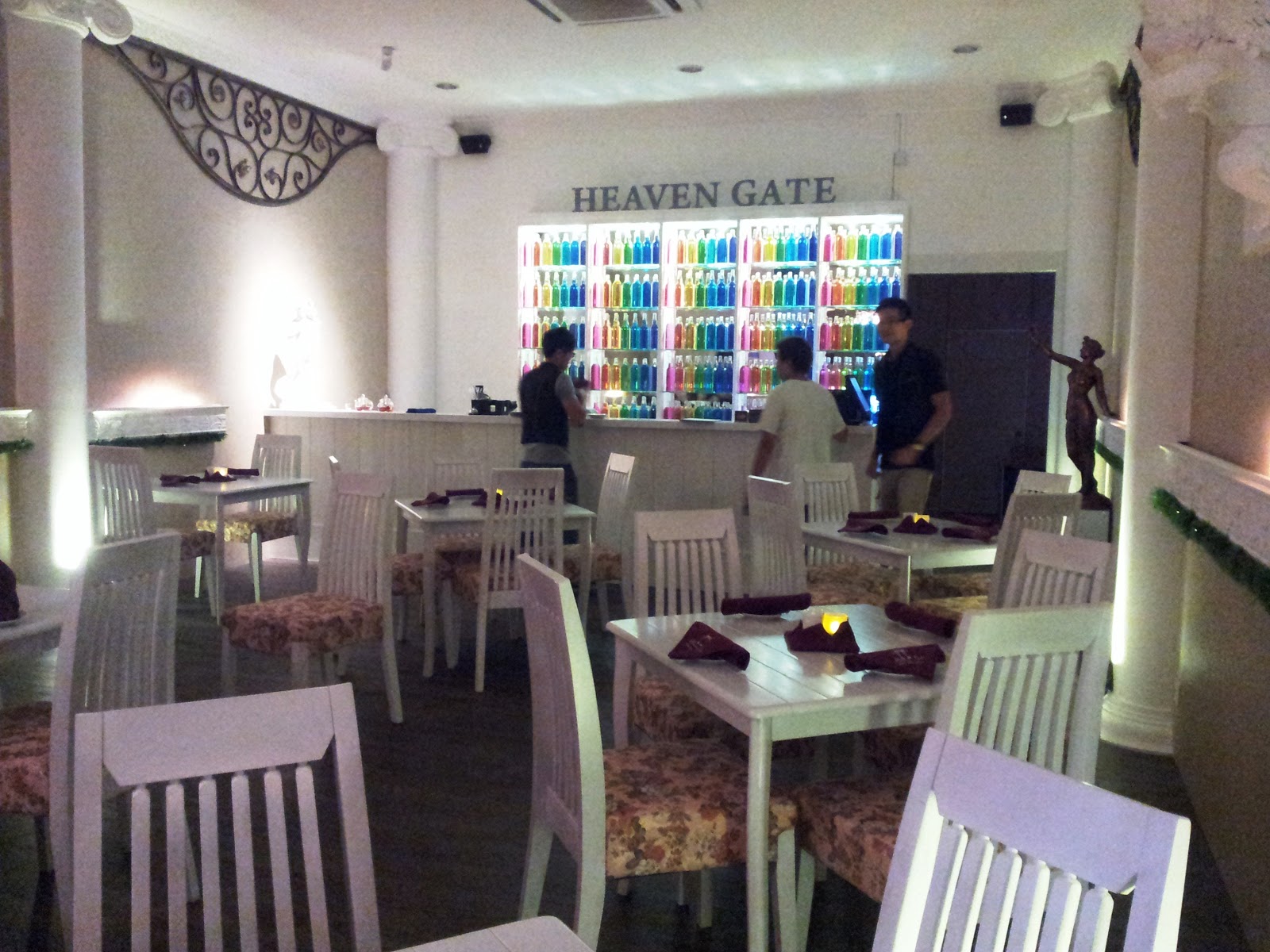 They even have bar/lounge upstairs for some chilling. 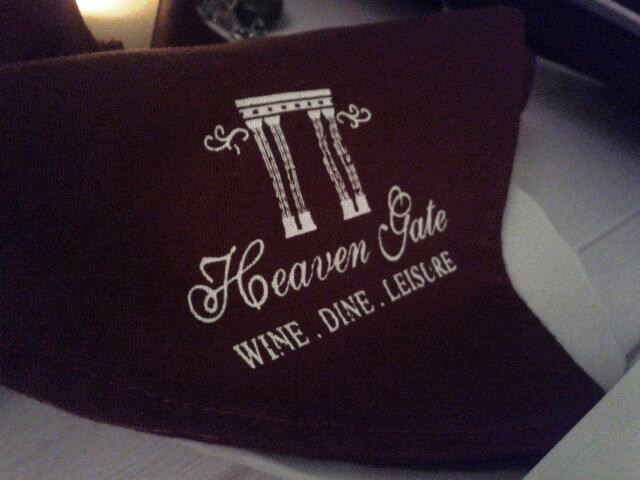 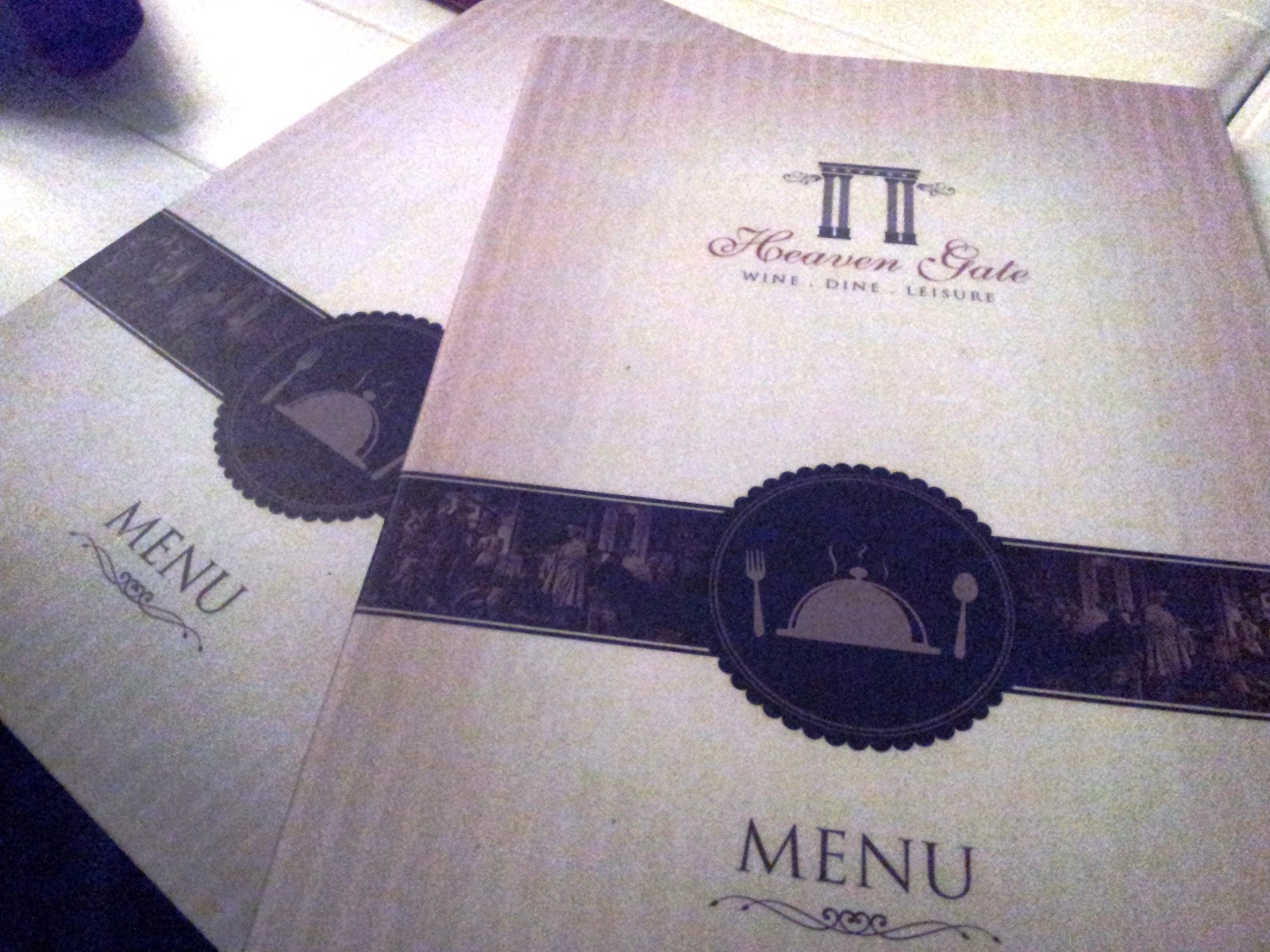 Some of the set-ups that drew our attention. 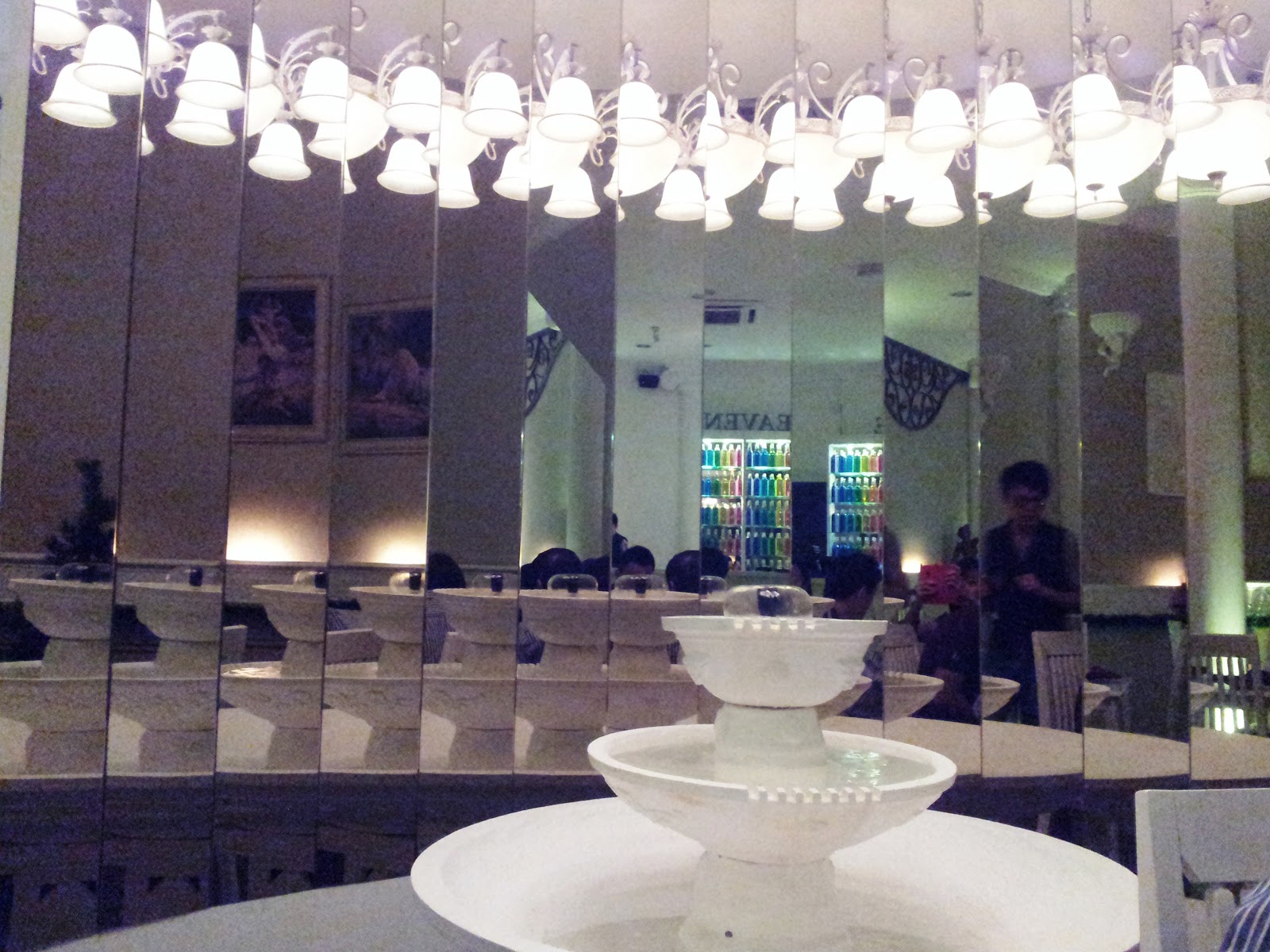 Everyone, please meet Jaryn and Joe. 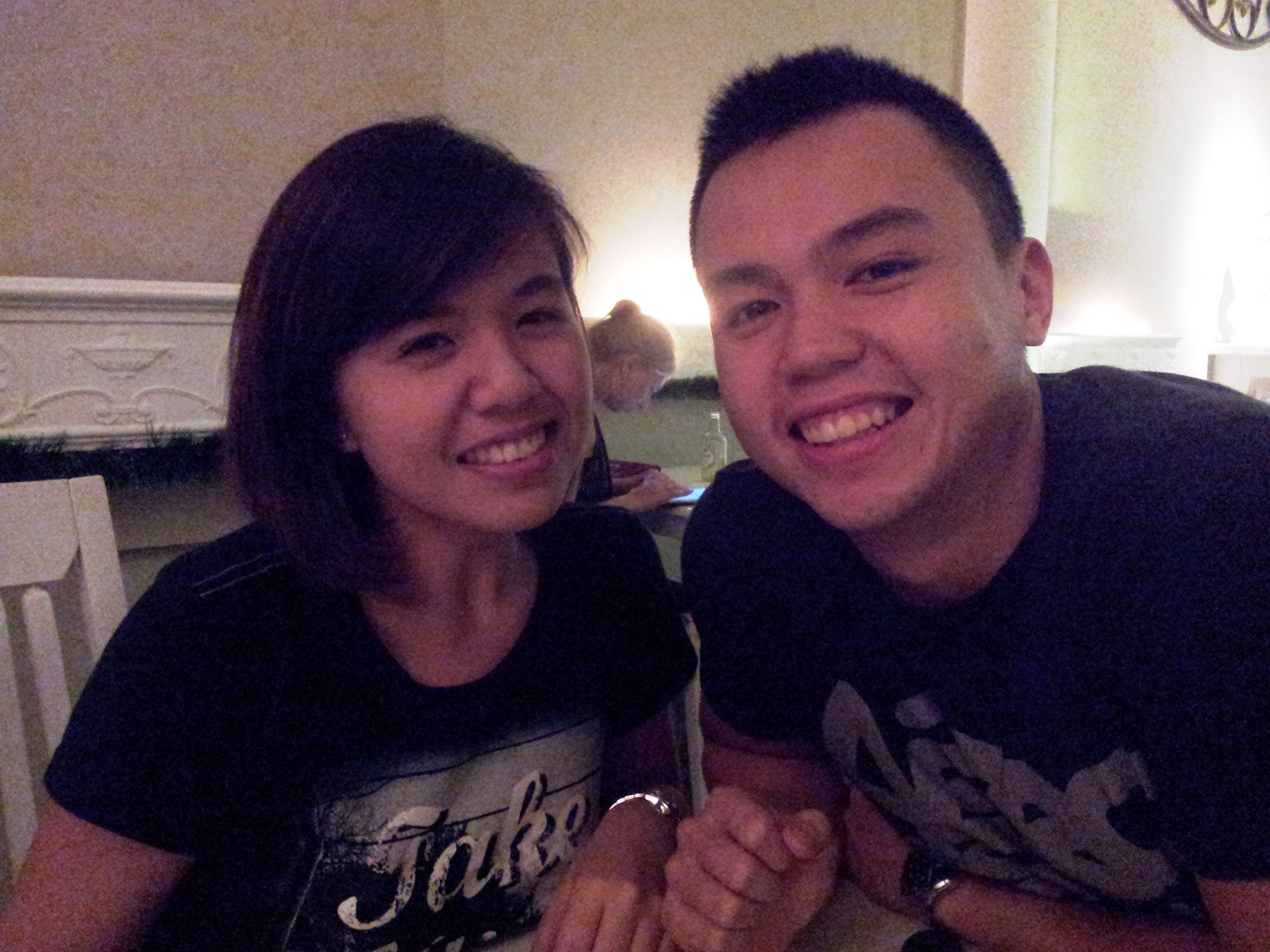 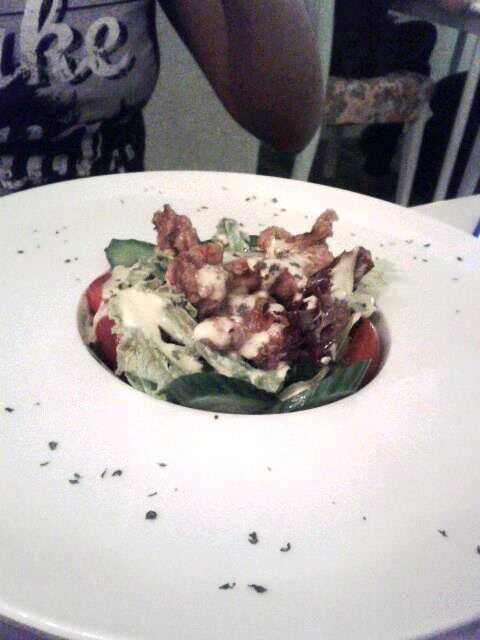 He says: This thing came with a plate that shape almost like a flying saucer! Haha. Im not a big fan of salad but the sauce on top tastes good =)

She says: Love the dressing and the cubes of chicken fillet. I think the portion should be bigger. So small, quite pathetic lo.

Joe says: Not bad. Dressings was OK and the chicken tasted like Chicken McDeluxe, which is not exactly a bad thing.

Jaryn says: I was on "diet" (which lasted one day!); which explains why I ordered this dish as my mains. My dish was the first to arrive and it got a lot of attention from all the hungry faces. They looked like they would steal my salad anytime! I could smell the fried chicken the moment it was served; like KFC. The chicken was crispy and soft. I liked it. I'm a huge fan of fried chicken. Who isnt? The dressing was really good in my opinion. Flavourful without being overpowering. I could do a bigger portion though. Overall; thumbs-up. 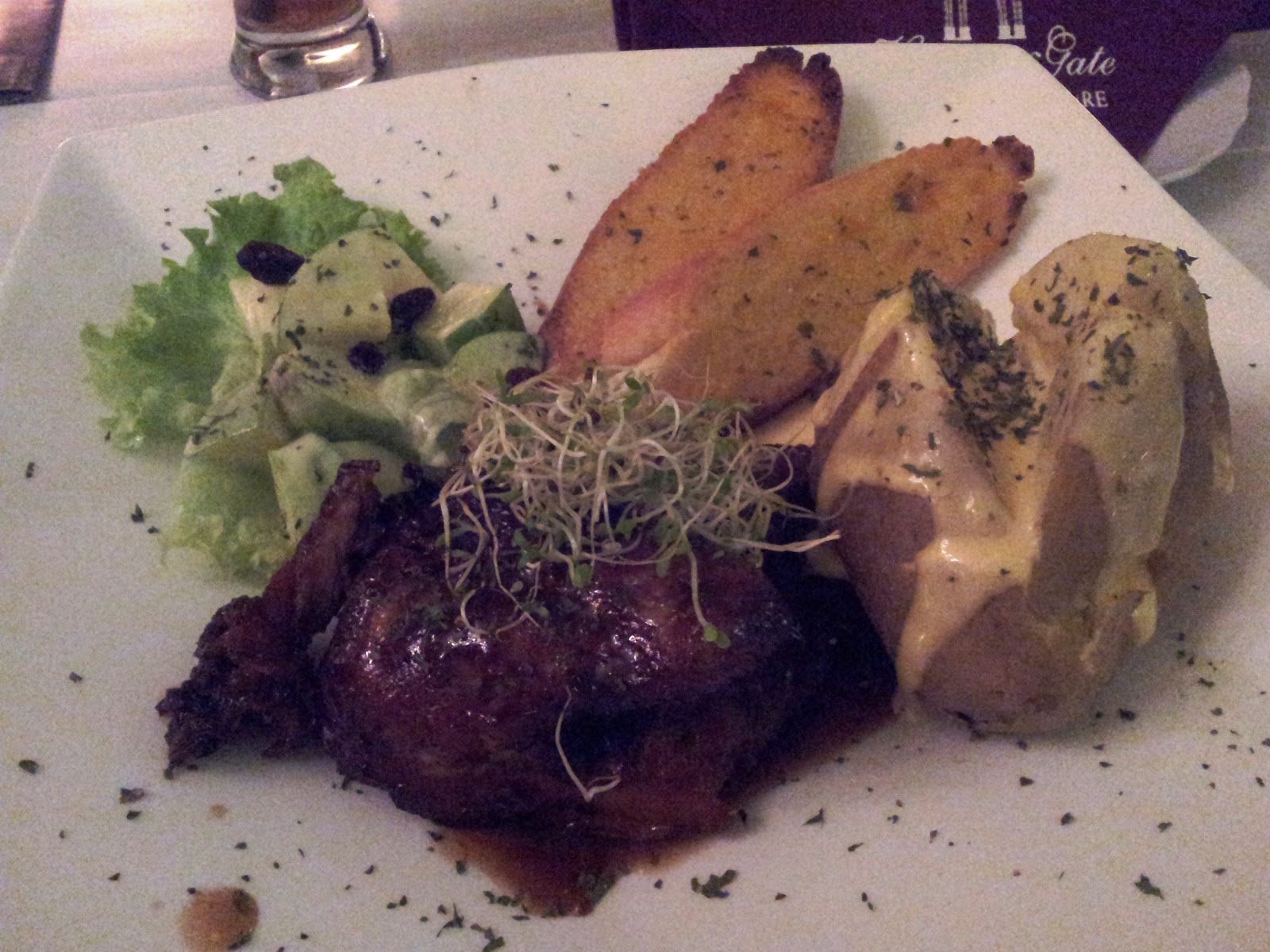 He says: Its the sauce again. A bit spicy and sweet to near perfection. However, it came with the chicken bones. So, if you wanna order this, prepare to eat like how you eat in Nandos or KFC. But it is still a yes yes for me.

She says: Spicy what? The sauce is sweetish. No spicy, nope. I like the dish. Just a like. One thing I really don't like or understand is that why would they serve these kind of chicken-meal with bones as well? It's like I'm all dressed up to eat in a really fine looking restaurant but upon eating this dish, it kinda ruins the whole mood. I think it would be better if it's boneless. They literally gave me the part with wing attached to it. Downs.

Joe says: This one is pretty good to.. Flavor was alright but there's nth spicy about this dish for me. LOL.

Jaryn says: Spicy grilled chicken: More like, normal grilled chicken. Come on, you don't name your dish "spicy" when it isn't spicy at all! Not in Penang anyway. I remember nodding my head in approval when I tasted this dish; but when I try to recall its taste now, I can barely recall. I liked it.; I think? But I don't think this is the dish that I would order the next time I'm there. 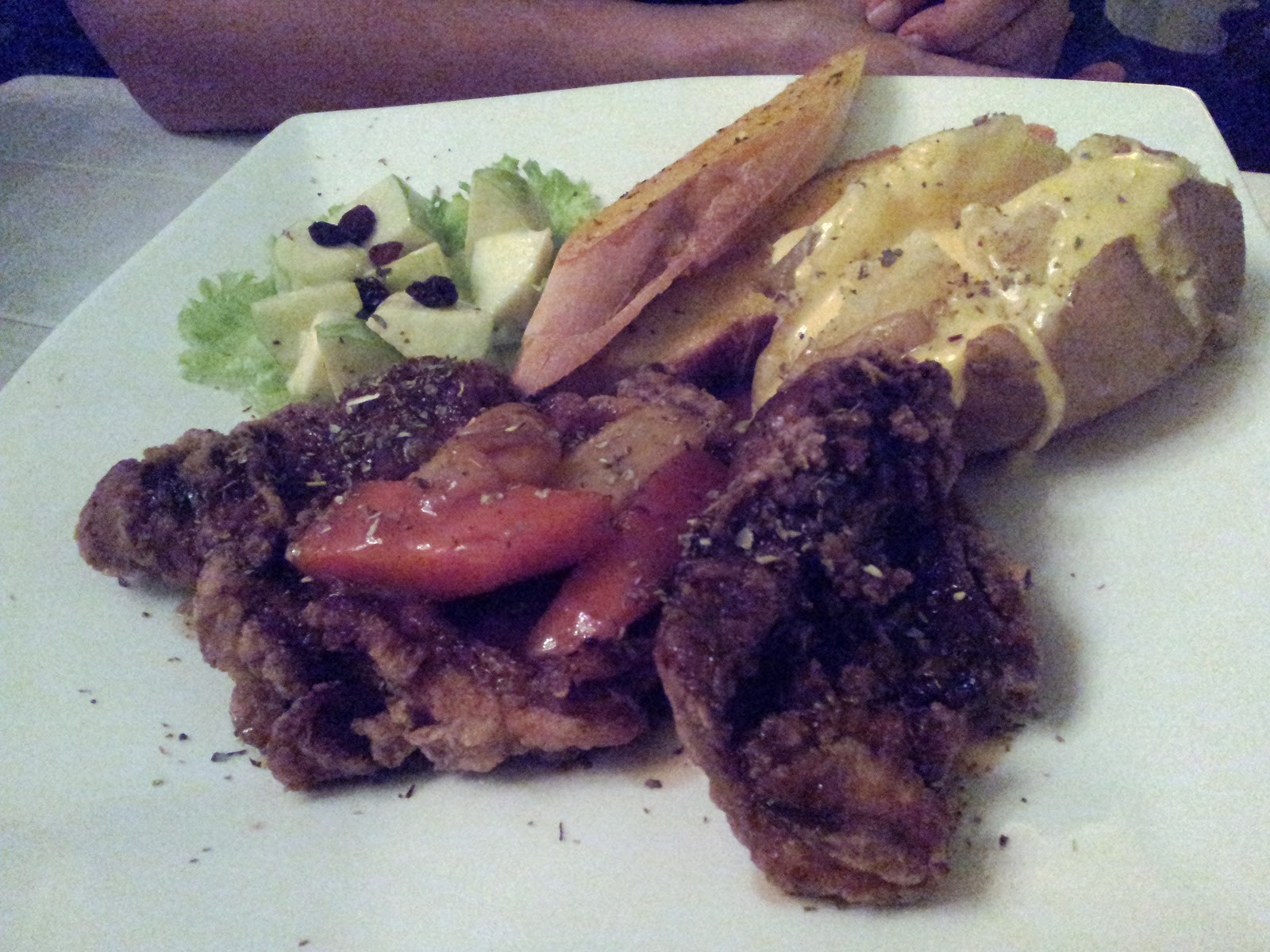 He says: This thing is good stuff if you're a big fan of chicken chop! Deep fried chicken topped with a very special sauce that has a mild taste of wine. But, I'll go for the other dishes next time =)

She says: Typical chicken chop. Unique somehow because of the sauce that is made from wine. Not too strong though. just at the right taste. And again, they serve chicken with their bones. No good.

Joe says: Can't really remember how it taste like anymore. But I think this dish is slightly better than the average chicken chop you can get elsewhere.

Jaryn says: Mom's chicken chop was gooooooooooooood. Would order that the next time I go there! 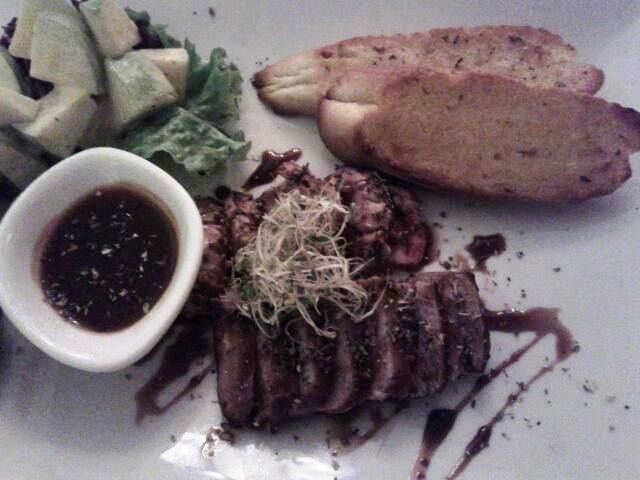 He says: Lo.0k at that! Served nicely. Grilled medium rare tuna. Its a bit crunchy outside and smooth inside. Like it. Try this!!

She say: Quite a huge disappointment when I ate it. I took half a bite and gave him the other half. Didn't like it.

Joe says: Slightly dry. Not much flavor. First time having grilled tuna so don't really know how it should taste like. The dressing that accompanies the fish tasted weird for me (sweet and sourish at the same time hmmm). Overall, wasn't really a good dish for me.

Jaryn says: I was looking forward to tasting this but i was very disappointed with it!! The texture of the fish was just wrong. The flavour was weird. The sauce was...forgettable. No thumbs-up for this one! 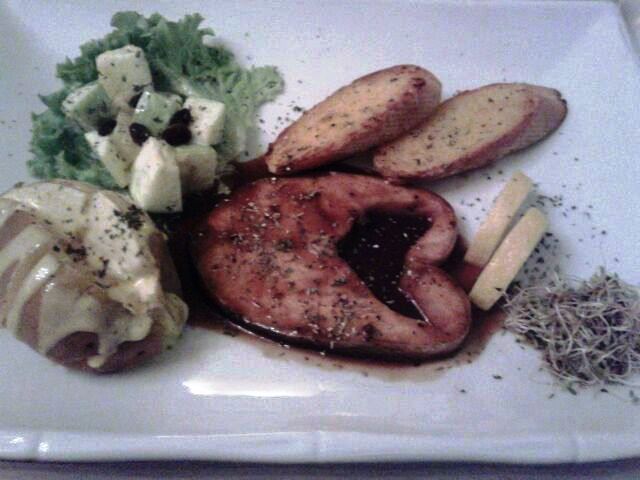 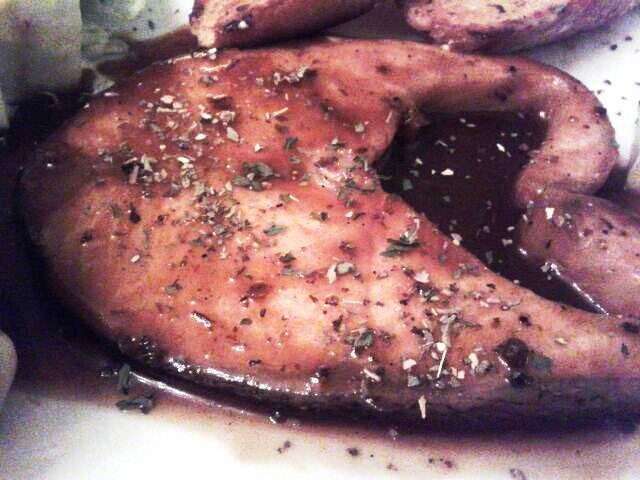 He says: It's the sauce again! Love it.. The salmon is really fresh.. One thing, you gotta be careful when you're eating this as there is a lot of bones..

She says: Everything about the fish is all good. Only one thing that kinda ruins (for me) the whole dish. It's tooo bone-y! Every bite I take I had to carefully search the fillet through with my tongue. And one actually got stuck between my braces. So for that, a BIG NO for this one. How can anyone serve salmon with bones eh? Ughh. Makes me angry. Kidding kidding! :)

Jaryn says: I LIKE THIS ONE! A lot of fish bones inside though! not very pleasant to eat when one has to constantly chew for the bones ey? But I liked this a lot more than the tuna dish. 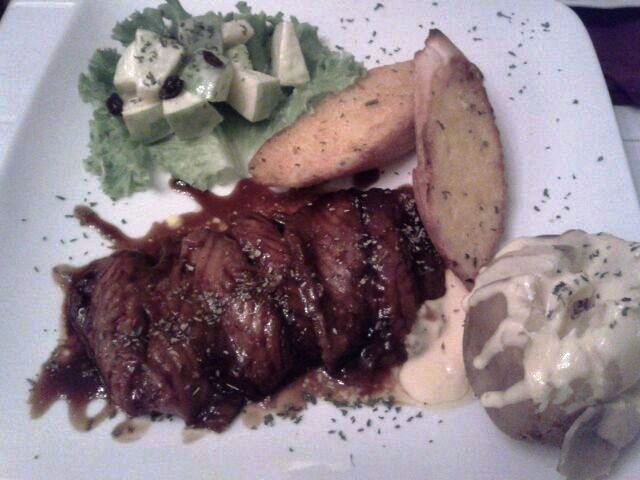 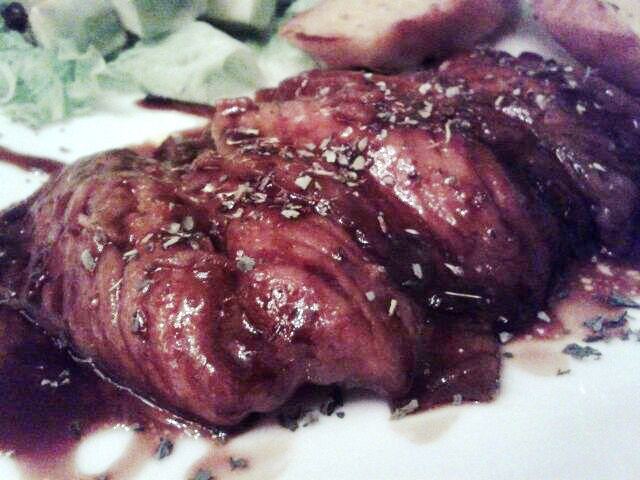 He says: One of the best dish of the evening for me =) This is my first time eating sea bream and I found that this sea creature tastes like unagi! hahaha. And, yes, I love unagi!

She says: Probably my top favorite of all. It's so similar to eating unagi. So similar. The fish is so lemak-ish and the sauce was just fork-licking-good. Love this to bits! And no bones! Yiippee.

Jaryn says: I like it!!!! And dad finished the entire plate!! He must've loved it tooo. 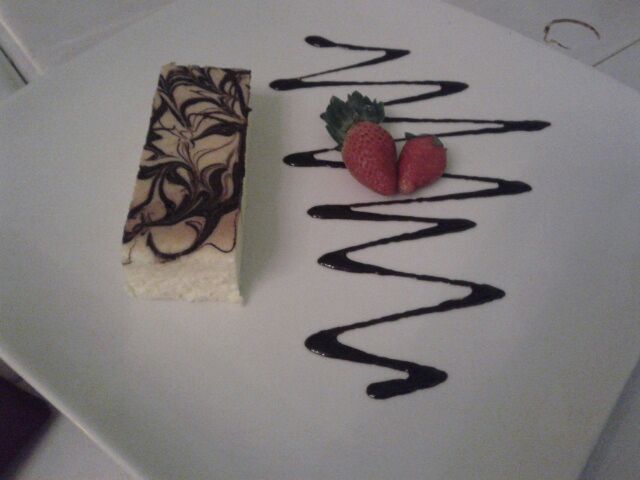 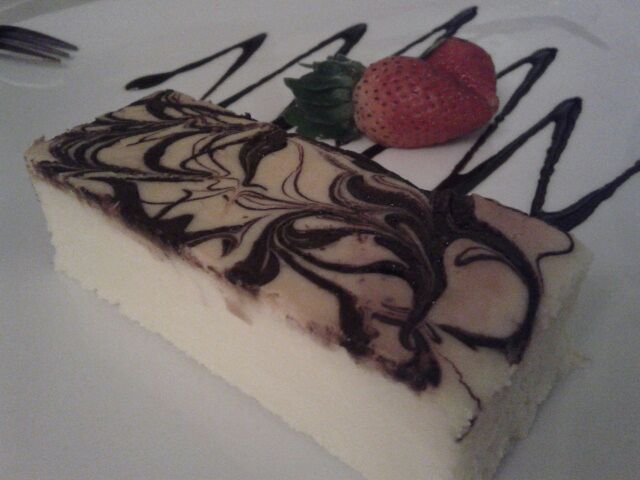 He says: Its not bad.. Just nice as it is not too sweet.

She says: Like any normal cake. I like this one better because it's not that sweet *health conscious*

Joe says: I liked the cheesecake! Quite dense and the flavor was just about right for me. Thumbs up :)

Jaryn says: a very typical cheesecake. Which is both good and bad. Typical means it's edible, it tastes like cheesecake. I liked it and enjoyed it; but I won't go around telling my friends, "WOWWWW YOU'VE GOT TO TRY THEIR CHEESECAKE!". Overall it's...well..just another cheesecake. 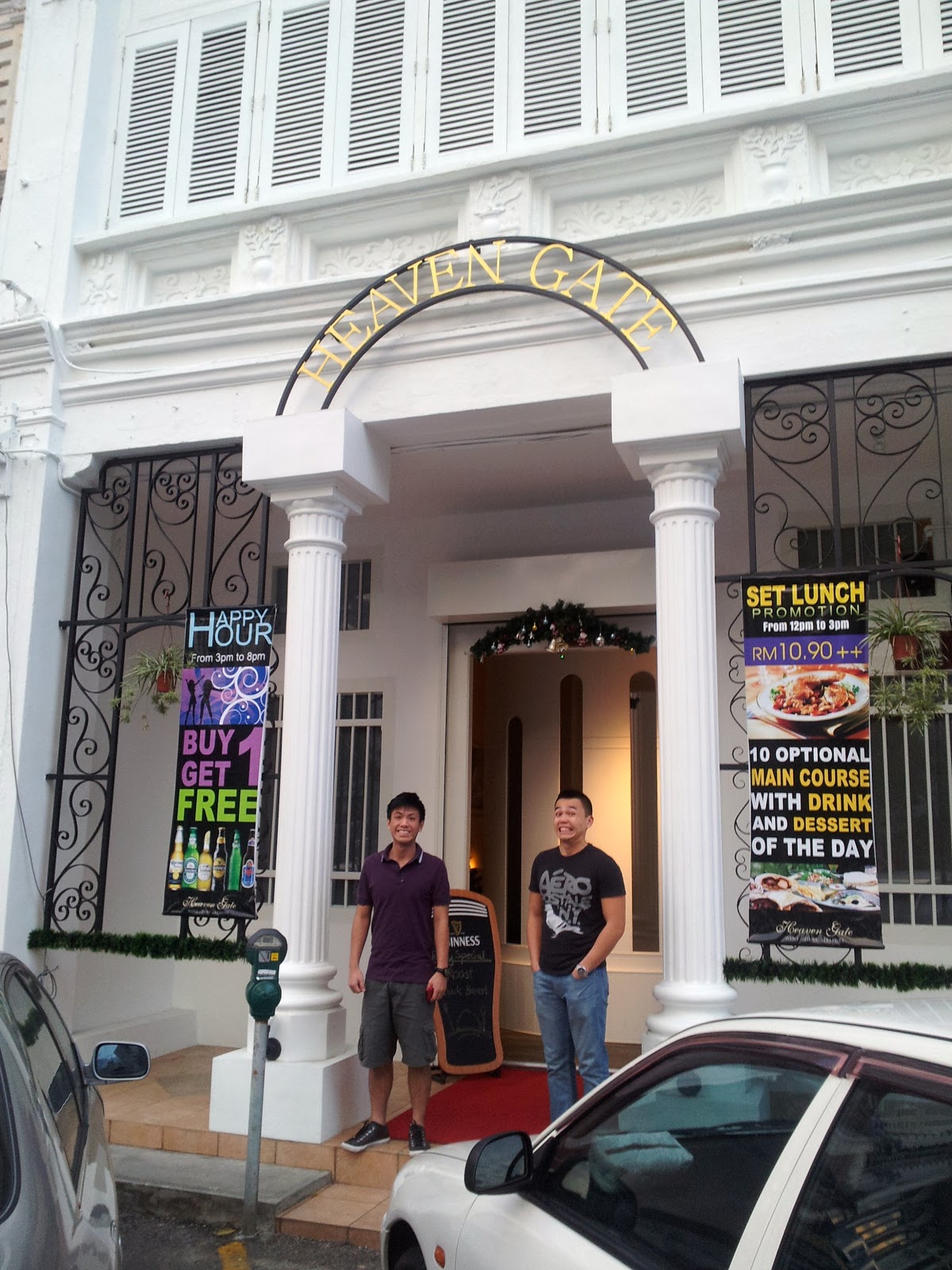 Ratings:
His rating: 8/10
Her rating: 6/10
Joe's rating: 7/10
Jaryn's rating: 7/10
Posted by WhatTwoEatHere at 3:53 pm
Email ThisBlogThis!Share to TwitterShare to FacebookShare to Pinterest