So how many of you, 'all-the-so-called-Penangites' have been to the other side of Penang?

Yes, there is another side of Penang!
*shame on you* to those who were like "Huh? Really?"

Let us show you THE MAP of this beautiful island *googling*

Spot BALIK PULAU!
The left side of the map. If compared to the side that we know of, it is rather quite not well-developed, yet! ﻿Balik Pulau is often famous for its laksa and also the perfect place to eat durian (the king of all fruits). But that's not what we are gonna talk about. Of course, there's plenty of things to eat from the morning till the afternoon there, but what about when the sun has gone down?

Fear not. For we went to a place for dinner (more of like supper since it was 10pm plus) after our floorball state training (yes, that's why we are both still in good shape even when we eat so much! kidding kidding). We wanted something mamak-ish/malay-ish/curry-ish.. We chose this place to eat because they have such attractive coloured signboard of the place. And our first impression was like "The food here must be nice, since there was quite many people there eating" or probably cos it is by far the biggest Malay makan place that's in Balik Pulau. Haha. 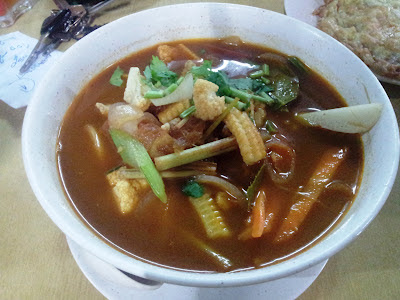 He says: Tomyam lagi! The tomyam here is quite spicy but its not that KAO. Be careful vegetarians, there is meat inside the tomyam sayur!
She says: It doesn't really taste like tomyam's tomyam. Get it? But I love the soup! I actually pour quite a bit onto my plate till it floods my rice, something that I don't usually do. We ordered tomyam sayur but there were squids, prawns and chicken meat in the soup! Yeehaw! :) 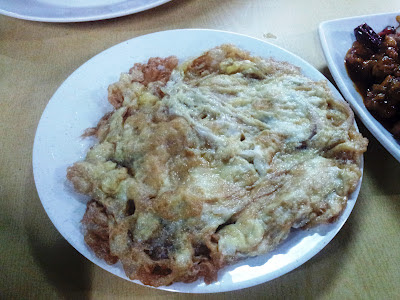 He says: Yerrrr... Super super duper oily.
She says: My least favourite that night. Super oily and nothing to shout about, really. Confirm will not order this the next time I go there again. 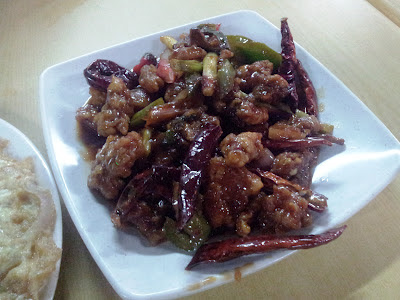 ﻿
He says: Hmmmmm.. A no no for me next time!
She says: I find it super hard. It's almost like there's no meat in there but flour. It's definitely deep fried first. The sauce, however I like! Spicy and thick!

Azlan Tomyam
Location: Balik Pulau, Penang
Direction: Heading towards the town area from Balik Pulau Sports Complex, it will be on your right. You won't missed it as their signboard is clear and wow :) 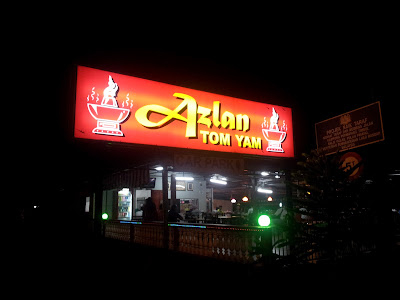 Ratings:
His rating: 3/10
Her rating: 4.5/10
Posted by WhatTwoEatHere at 9:35 am
Email ThisBlogThis!Share to TwitterShare to FacebookShare to Pinterest