We consider ourselves pretty hardcore fans when we talk about Thai food! It's like 'sure win and sure eat' if we ever utter those words! You just need ONE person to say it, and confirm we will go eat! CONFIRM! 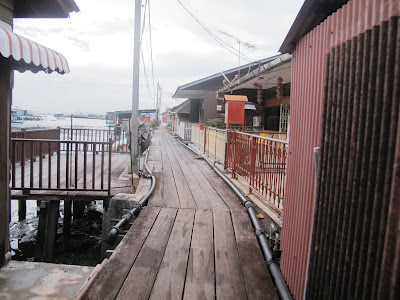 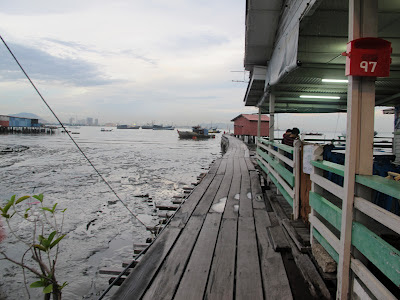 more places to sit as you you further inside.. 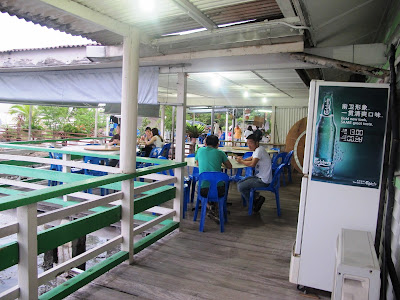 Spot the mini red house at the end of the jambatan? 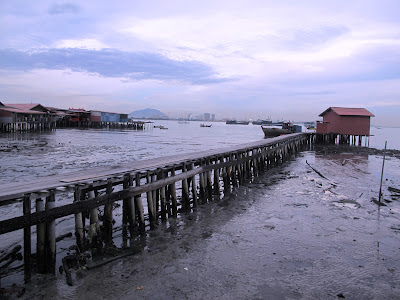 It's the 'natural' toilet! So, while waiting for the food to come, we put on our explorer hats and check out out the toilets. Very the supernatural toilet indeed. 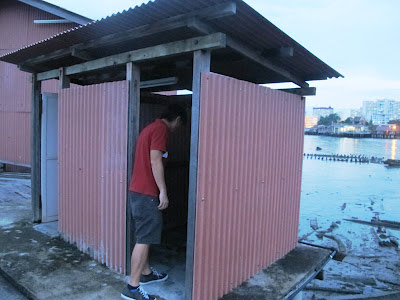 You must be wondering why we call it that. You see, normally when we go into a toilet, es expect to see either a toilet bowl or a squat kind of toilet, right? But this one, its slumdog millionaire in Penang! Suddenly, she got so disgusted and like, curious at the same time. He ummm... just smiled the whole entire time?

So ya, that means any kind of output that people release goes right into the ocean, and anything that's down below. Ugh! and it was low tide sumore. Imagine when it's high tide and people will be eating and enjoying their 'sea-view'! Oh the horror after we found out! 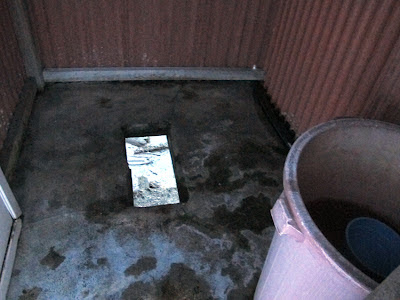 We went with our two friends, and they too will be commenting from their part! :) 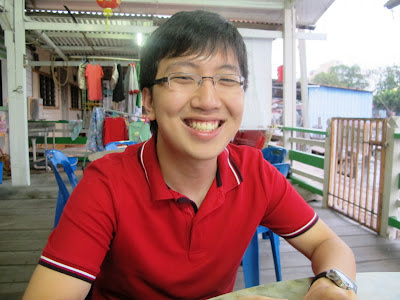 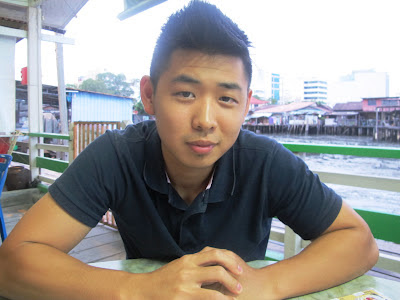 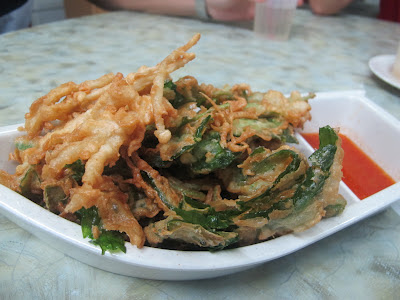 He says: I kinda like this! Probably because most food which are deep fried tastes good! hahaha. Tips: Dip this into the Thai chili sauce, it'll taste even better. I would opt for the mushrooms over the kangkung though.

She says: I don't really like this. Not much taste eh.

Term says: Pretty good starter dish. The fact that this dish came earlier than the others was probably so that we can eat it while waiting for the other dishes. A lil more salt and pepper will be better to enhance the taste. 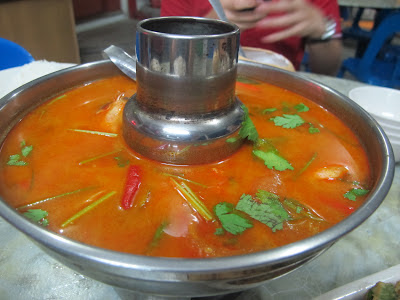 He says: Takda 'uhhhmmmmmm'! The length of the time we waited for this tomyam, I would expect this to be at least good. But, it's not. Downnnn..

She says: Ok ok with the soup. Spicy enough and sour enough, but really nothing to shout about.

Moy says: A typical must-order dish at a Thai restaurant. I must say that it wasn't the best I've tasted. I guess the food quality has decreased since my first visit in 2010 when they first opened and it was way better that time. There weren't much of flavors and ingredients in the soup but it is still spicy and does have the tomyam taste. Just that its not a very exceptional one. Still, its always a typical must-order dish at a Thai restaurant but just one note, that is the portion is quite small.
Term says: Thai food specialty and must call dish. I think it wasn't as good as I thought it would be.. not enough 'kick'.. Needs more flavour and ingredients in the soup.. And too little meat for the price we paid for.. 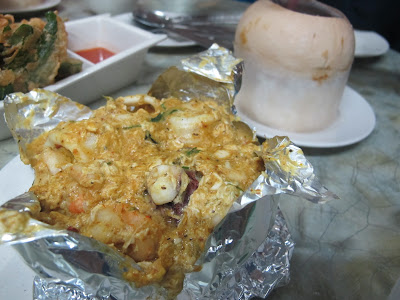 He says: Hmmmm... Just an 'okok' dish for me. Smells great with the rich flavored fragrance of the coconut milk. Nevertheless, unlike most Malaysian's otak-otak, this Thai's otak-otak is wrapped in an aluminium foil. Don't be deceived by the picture above, the portion of this dish is quite small as the middle part of this dish is hollow to occupy the fire to heat up the otak-otak as long as possible.

She says: No doubt my favourite dish that night! Doesn't look very appetizing but it's super yummy. The coconut milk that is used really enhances the taste alongside with the seafood that's in it.

Moy says: This was probably my favourite dish among all dishes. It has good variety of ingredients, taste and flavors. Crab and prawn meat are also added in which it is usually made traditionally just with fish meat. I love the balance of the coconut milk as it's not too much but just at the right amount. Wrapped and boiled in an aluminium foil, the fragrant is amazing  when first opened. This is a must try!

Term says: Gotta be the best dish for me on that night.. Rich in flavor and taste.. However, too small for a portion.. More meat too perhaps? 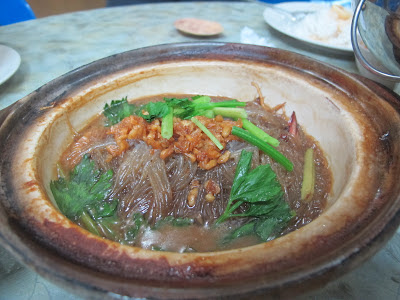 Moy says: I've tried this once when they first opened in early 2010 and it was really something special that time. Sadly, upon visiting this time, it didn't live up to my expectation. There's a very strong bad smell with the dish which makes it unpleasant to eat. The portion of remainder for that dish speaks for itself.

Term says: I think this was pretty good dish.. Something out of the ordinary and I assumed its kinda like their specialty.. The prawns in that dish was prett fresh.. However, maybe a lil too much spices? 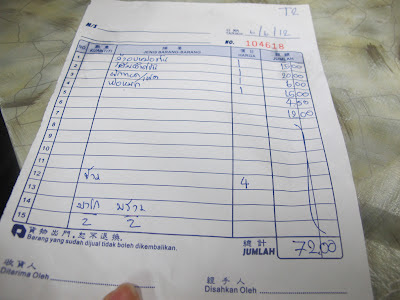 He says: Ex to the pen to the sive! i went there once long time ago and I told myself I will not go back there but somehow I ended back there again! This time, I would say the same to myself. The only plus point here is the environment (sea-view or sometimes mud-view).

She says: I honestly like the whole surroundings of how we look into the 'ocean' and how romantic-ish it can make one feels. BUT IT IS CRAZY in terms of the price and how normal the Thai food actually taste like and the toilet! Yes, that actually makes me not like the place. Imagine when the tide is high, all the human's output will be seen floating la! Eeeee.. For me, I will not go back there! Thank you :)

Moy says: A pretty good environment and it's a place that not many can find in Penang. With the view of the beautiful sunset in Penang and the surroundings of the wooden house along the jetty, it's truly a different experience compared to any other Thai restaurants. The environment itself feels like we're just having a simple dish at home and its back to basics. So if you're up for something simple, check out this place. It's not the best place for a romantic date but it's a place for an enjoyable and relaxing evening with some Thai food accompanied with friends. Just one note, the prices are a little bit expensive considering the small portions of the dishes. However, give it a try and you have your say! :)

Term says: Environment was good.. Something different from other places facing the sea.. Sadly, the tide was too low (don't know if the water will actually reach the shore on other days though).. But watching the evening turn into night while eating your meal is surely a pleasant sight! 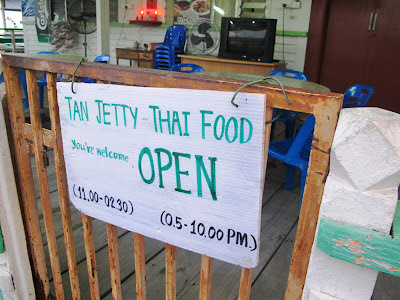