It feels super awesome that we finally decided to start a blog! Not just any personal kind of blog but a specialized one! and it's a no brainer that it was going to be on food! It was kinda funny how it all started!

*one afternoon while having lunch at Kampar Fish Jelly*

*walked into the shop* 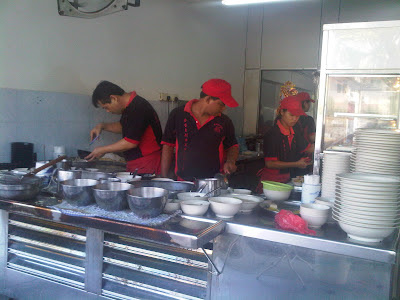 *got a table and sat down*

*both looked around curiously* (there were sooo many people eating inside!)

He says: It's seriously that good meh? (cos She recommended that place for lunch and insisted that it was very nice!)

She says: *gave him that stare and points to the crowd* not obvious enough ka? 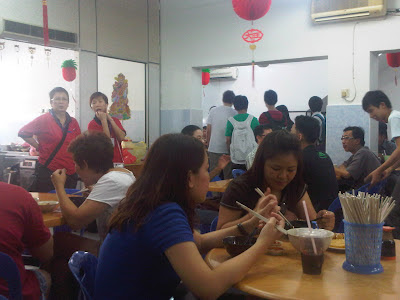 He says: *gave her that we-will-see-how-face*

*continues to talk about other random stuff*

She says: Eh, since you famous for your tam-chiakness, why don't you start a blog ah? *gave him that sarcastic look*

*looks at her in silence*

He says: Then why you delete yours ah? *with his left eyebrow raised*

She says: ONS! We can start our first post with this lunch! *takes BB out to start snapping pictures*

*with more detailed conversations that followed of course, we finally decided to take that leap of faith*

With that 'introduction', you can roughly guessed how long we kinda waited for our food. You probably will guess at around 30 - 40 minutes but boy, you are wrong! It was pretty impressive that they managed to serve the food after 15 minutes despite the so-many-orders-they-have!

So, being a 'brand new' food blogger, we decided to try on everything that they have! (actually, not all also la) but we try! :D

First up, the sauces (Chilli and Ti-Chiau) 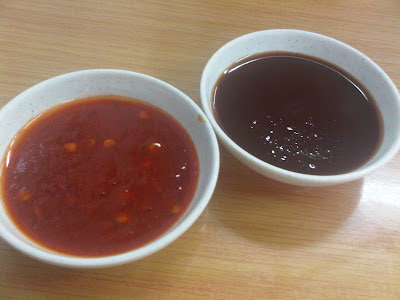 He says: Black one's better!
She says: I am so a chilli-kind-of-girl. So, I obviously liked the RED one! The chilli somehow is very unique I would say. It has that its own kind-of-taste and aroma. Overall, I love it! I refilled it like for 4 times!


First half of main course.
Hakka Mee - thin flat handmade egg noodles with bean sprouts (taugeh), served with minced meat and their special sauce.
Yam Rice - they have yam rice served too but we did not order this time. 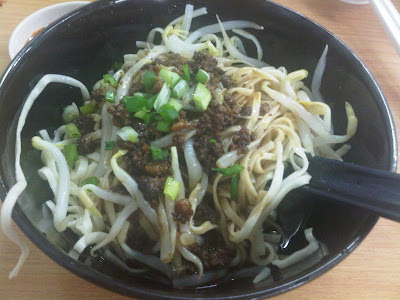 He says: Unexpectedly good!
She says: It was finger-licking-good! Okay, more like chopsticks-licking good! I wanted second serving of that!


Second half of main course.
Yong Tau Foo-like-serving - pick varieties of food to be in the soup. Most of the items come with fish paste. 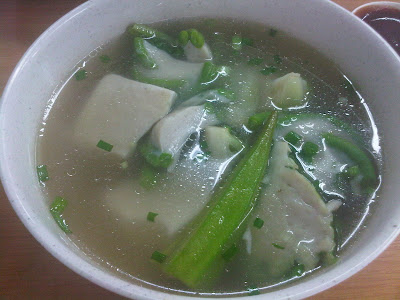 He says: Its not bad.. Not as good as how she described it! It's just like any yong tau foo!
She says: I like the soup. But I think I like the items inside more. It's probably because I like vegetable soooo much! But other than that, it's nothing really special. 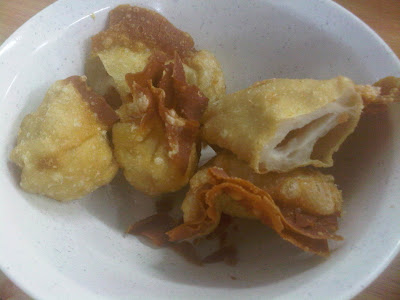 The ordering place at the front entrance where the kitchen is as well. Other than all that, they serve Herbal Chicken wrapped in aluminium foil as well. 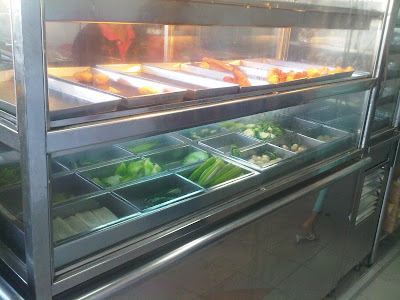 Kampar Fish Jelly Restaurant (Penang)
Location: Sungai Nibong.
Direction: Its also located between Pesta and Gold Coast Condominium. If you are coming from Pesta, It will be on your right just before the overhead bridge to the roundabout. 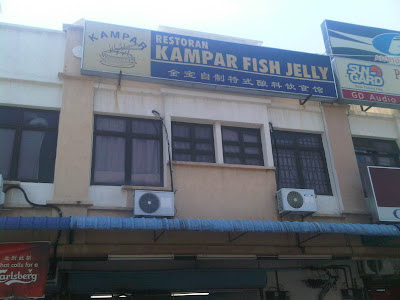 Posted by WhatTwoEatHere at 12:14 am
Email ThisBlogThis!Share to TwitterShare to FacebookShare to Pinterest
Location: Malaysia Penang, Malaysia