So we were all craving for some thai food (actually we crave for that almost like everytime!) and the question is again "where to eat?". Then, we decided why not go KhunThai restaurant AGAIN since the last time we went there, it was good.

the one we went last time is in Butterworth and this time we chose to go to the one situated in Penang island itself! (find out where at the end of the post)

We did not go with very high expectations as we had no idea whether it's going to be the same as with the one we went before in terms of taste and also environment!

and boy, it was nice.

the walking in towards the inside and more extended spaces. 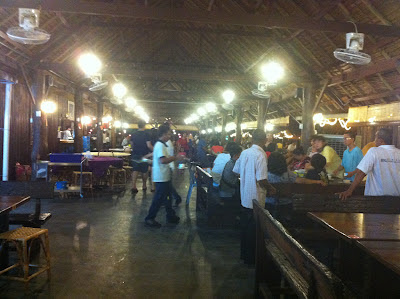 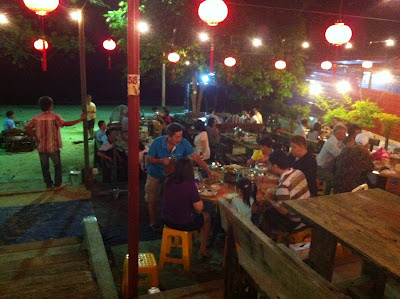 She says: I was walking and thinking of what to order at the back of my head but all that disappeared the moment I saw the 'extended' part! haha. I love the place! It's by the beach and it was quite windy so everything was like just right! and their lighting was so pretty! Extra point for the environment!
He says: Everything that she said, and suitable for families and even couples wanting a romantic Thai dinner beside the beach.


Also this time, we have our dearest friend from Thailand and her boyfriend to join us! Who knows better about Thai Food than Thai people right? :)
Everyone says 'Hi Nan and James'! 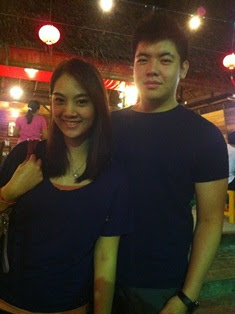 Moving onto our dinner..
Imagine eight people with eight different type of food preference on a table trying to figure out what to order! It was insane! We wanted almost everything they had on the menu! SO MANY ITEMS!

First up: appetizer in Thai style.
Mieng Kam (pronounced as how it is spelled) - It is a traditional snack from Thailand (duh!) that consists of several different ingredients all wrapped up in betel leaves.
The ingredients: Dried shrimp, roasted peanuts, chopped lime without skin, chopped shallots, chopped small thai chillies, grated taosted coconut, sliced raw ginger and the sauce (which is made from combination of fish oil, sugar, coconut, shallots and gallangal with some water) 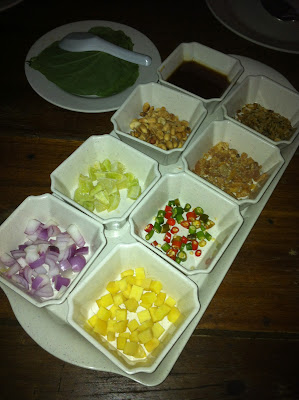 How to eat it?
1st - Fold the leaf into a cone-shaped-like.
2nd - Put all the ingredients into the leaf except the sauce, in no particular order (of course you may exclude the chili if you are not the type who could take the heat!).
3rd - Drizzle some of the sauce onto the top.
4th - Put the whole thing into your mouth.
5th - Chew slowly and savour the taste! 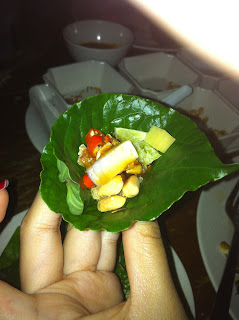 He says: Special but i'd prefer my mum's! Prefer it without the chillies and ginger!
She says: It was yummy to the max! Of course I like mine better with lots of shallots and chillies! and to top it all, the sauce! AH! How heavenly! The sweetness of that sauce just is the icing of the cake. or the leaf! hahaha.
Nan says: I like it without the heat of those chillies! However, my boyfriend have this without the dried shrimp as he does not eat seafood! (what a waste, James!)

The rest of our 8 course meal:
Fried eggs with onions. 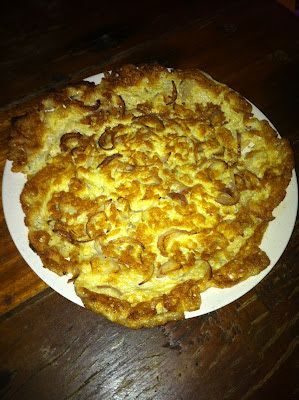 He says: Biasa saja lah...
She says: Nothing special with this one.
Nan says: Just a normal omelette! I can make a better one! :P 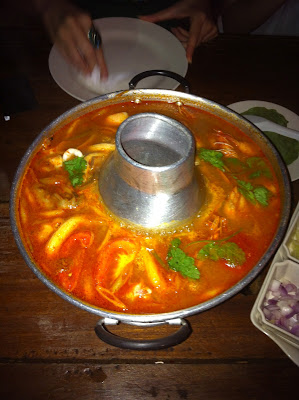 He says: Ooo! I love this! It is more to the sweet kind rather than the sour type of tomyam though. You guys should give this a try! Must try!
She says: It's alright for me. It's pretty sweet for a Thai tomyam I would say. But I don't hate it la!
Nan says: This soup is weird. It taste nothing like the tomyam back in Thailand. (and then she invited us to go back to her hometown, Sattahip to have the original tomyam!) :) 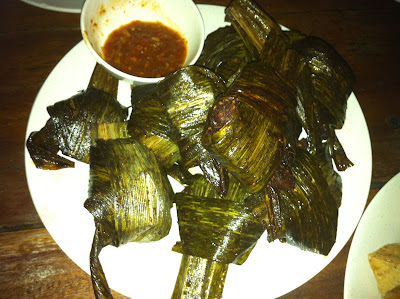 He says: The size of this dish is extra big! Also, the taste is super good as the sauce compliments the dish.
She says: I like this dish. It looks oily in the picture above but it wasn't really oily. The meat was really soft and aromatic.
Nan says: It's okay la.... (She is not a big fan of pandan chicken) 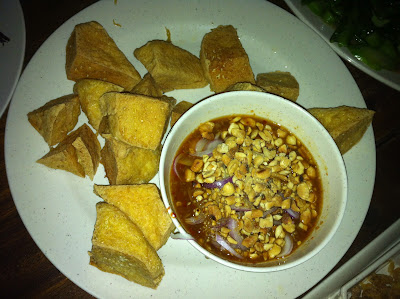 We say: It's also a very normal dish (but the sauce id pretty special, unlike those normal thai sauce!) 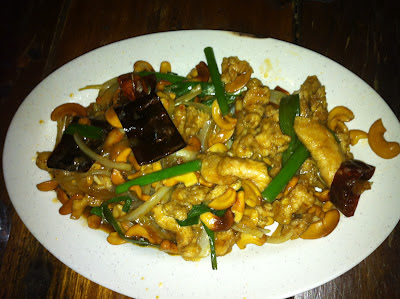 He says: The taste is not aromatic enough. However, the meat is very soft and easy to chew.
She says: I like this chicken dish too! Tender sliced chicken with their sweet-spicy sauce. I think they stir fried it very well.
James says: It's nice! (he's a man of very few words) 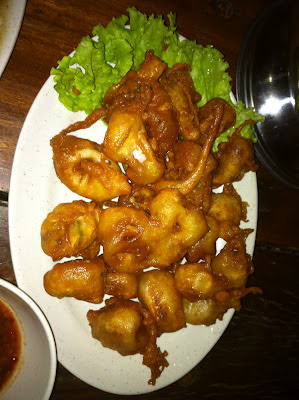 He says: Different way of deep-frying. It's so-so la. Maybe you can try!
She says: I didn't like this one. So flour-ish and oily! Definitely not going to order this one next round! 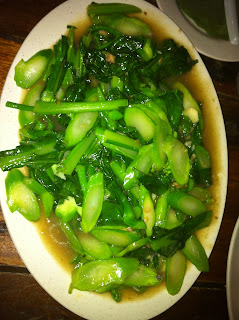 He says: Not that good, but I finished it! :D
She says: If I am not mistaken, it was the last dish that actually finished! hahaha.
Nan says: I don't eat vege that doesn't come with any meat! (speaking about 'unique' Thai people! haha)

Gaeng Som Steamed fish - It is a sour soup based steamed siakap. This fish came alongside with a bowl of more of its soup so that we could easily refill it on the charcoal-based-typical-fish-serving-thing. 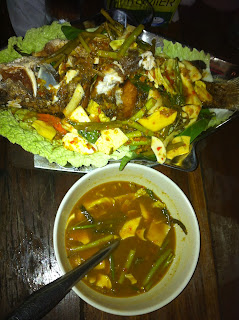 He says: Hot, spicy and sour! Test your taste buds with this! Unique! Pour the sauce on top and let it get boiled up for around 5 minutes before eating.
She says: I heart this dish! hot and spicy, just the way I like it! :)
Nan says: I don't eat Gaeng Som back in Thailand but, I like this one. Totally recommended! :)

What was pretty sad about the dinner was they didn't serve any desserts! I mean like, come on! Thai desserts are like MUST HAVE after those main courses! haha. However, this place  no doubt provides one of the best Thai food in penang!

Direction: Coming from the airport, go towards Gertak Sanggul and you will reach to a junction whereby if you follow the road towards the right, you'll be heading to Balik Pulau but instead, take the LEFT turn and go straight. Drive slowly and keep an eye on your left! You'll be able to see the humangous KHUNTHAI's signboard and just turn in. 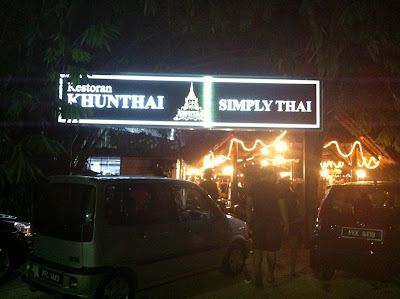 Price: Reasonable (for the eight of us, it was only around RM170)

Posted by WhatTwoEatHere at 11:22 am
Email ThisBlogThis!Share to TwitterShare to FacebookShare to Pinterest